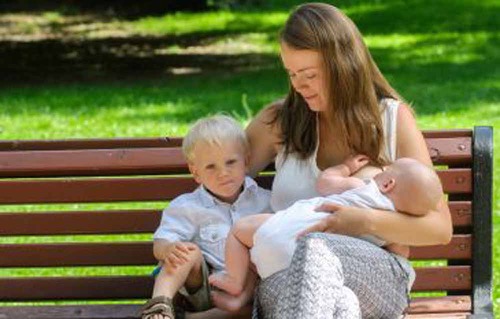 The “evolved” age of weaning is a topic of debate not only among the general public but clinicians and scholars as well. Weaning, however, is not an event—it is a process. When that process begins and how long mothers and infants negotiate milk transfer varies across mother-infant dyads [1,2]. While insights can be gained from consideration of our primate relatives (see Part I), comparisons across populations, and across mothers within a population, provide important insights into the human condition and the complexities of infant weaning.

Weaning in a biocultural context

The World Health Organization recommends infants breastfeed for up to two years of age or longer. Indeed, evaluations of dozens of cultures reveal that breastfeeding cessation occurs typically between two and four years of infant age [3-5]. These findings are largely consistent across hunter-gatherers, horticulturalists, agriculturalists, and pastoralists [6]. Pastoralists who heard dairy animals are particularly noteworthy. The genetic underpinnings of the lactase enzyme that allows mammalian infants to digest the lactose of mother’s milk has been shaped by cultural practice among humans. Individuals who produced lactase post-weaning and lived in populations with cows, goats, camels, mares, and/or sheep were able to digest animal milks, thus gaining protein and fat in their diet [7]. This complex interplay between the human genome and cultural practices is known as gene-culture coevolution. Interestingly, the use of domesticated animals across cultures is associated with a later age of introducing solids but does not accelerate or delay weaning [6]. Instead, breast milk is complemented by dairy milk for young infants. Among the Datoga of Tanzania, dairy, such as fresh and soured goat or cow’s milk is introduced around three and a half months of infant age and breastfeeding ended in their second year of life for a majority of infants [8].

Among indigenous communities modernizing from traditional lifestyles, approaches to breastfeeding have been affected. Mayan women, in the Puuc region of the Yucatan Peninsula of Mexico were traditionally subsistence maize agriculturalists, but more recent adoption of mechanized farming, access to labor market economy, establishment of a village clinic, and greater population density has changed their diet, economy, and health [9]. Whereas once these women almost exclusively delivered babies in their home, more mothers are giving birth in clinics and experiencing Cesarean deliveries. With these health changes, formula feeding is increasing and mothers are delaying breastfeeding, even if just by a few hours after birth. Moreover, younger mothers introduced complementary foods earlier and stopped breastfeeding earlier despite advice from health care providers [9]. Complementary foods typically included boiled carrots, potatoes, squash, and chicken, as well as tortillas, pureed beans, and crackers. Interestingly, colostrum was viewed differently depending on access to clinical staff. Among younger mothers whose adulthood was marked by the introduction of a local clinic, colostrum was viewed as beneficial similar to a vaccine, but older women who had become mothers before clinical care was locally available, viewed feeding colostrum as good because it helped to bring about the transitional milk [9].

For Tsimane forager-horticulturalists in riverine forests of Bolivia, modernization is associated with more intensive breastfeeding, as mothers living in remote villages in the forest and along the river introduce weaning foods at earlier infant ages than do women living in more modernized conditions closer to developed areas [9]. These introductory weaning foods are typically watery stews of plantain or rice and meat or fish. A majority of Tsimane mothers stop breastfeeding between 12 and 26 months of infant age, with a mean of ~19 months [9]. Whether mothers lived remotely, however, was not associated with the cessation of breastfeeding.

Taken together, these studies reveal that modernization does not have a consistent effect on breastfeeding practices, but they highlight how public health programs can be most effective at assessment and implementation when they consider traditional practices and beliefs within the context of cultural transitions.

Mandel and colleagues recruited women who continued to breastfeed after the first year [10]. They sampled milk from 34 mothers who varied in how long they were lactating (between 12 and 39 months of infant age) and found that the percentage of milk fat was higher the longer lactation had been sustained [10]. They stated that the “The long-term effects of such high fat intake have not been studied.” Kay Dewey’s 1984 [11] study on breast milk composition from 12 to 20 months was able to look at many more aspects of milk, including many minerals. In general, the milk composition was similar in the second year of lactation to that in the first year, when mothers were producing more than 500 ml of milk a day. However, very few of these mothers were producing that much during the second year of lactation, most had significantly decreased their milk production.

Importantly, the two studies described above were conducted in “WEIRD” populations: Westernized, educated, industrialized, rich, and democratic, but most people aren’t WEIRD [12]. In 1978, Jeliffe and Jeliffe reviewed milk production across multiple populations, including poorly nourished communities in the Global South. Milk volume is seemingly much lower as lactation progresses. This is to be expected, as young consume solid foods and suckle less often, milk flow through in the mammary gland decreases, causing a down-regulation of lactose synthesis [13]. The lactose is responsible for pulling water into the mammary gland (yay osmotic pressure!), so as lactose synthesis decreases, milk volume decreases. Recently, Quinn et al. showed that among Filipino women breastfeeding up to 18 months of infant age that milk produced for older infants was higher in fat content and lower in lactose than during early lactation, consistent with expectations of the weaning process [14].

These studies primarily studied milk up to two years of infant age, rarely three to four years of age. And they investigated macro-constituents in milk; percentage fat, percentage protein. What about the fatty acid profile? Amino acids? And what about hormones? Cells? Immunofactors? Microbes? Oligosaccharides? There are hundreds, if not thousands, of constituents in milk that we are still describing during the period of exclusive breastfeeding [15-17] much less constituents in milk during complementary feeding. We are still unlocking what these constituents do when ingested by the newborn, much less toddlers and children. The information on breastfeeding for five or more years comes from rare self-selected cases, an extreme tail end of a continuous distribution of weaning ages.

Irwin Bernstein said it best, “The plural of anecdote is not data” [18].

Most of what we know about the effects of breast milk comes from studies comparing formula and breast milk feeding or comparisons of the duration of exclusive breastfeeding. The amount of the differences between formula and breast milk groups depends on context. For the very low-birth weight, premature infant in the neonatal intensive care unit at high risk of necrotizing enterocolitis, breast milk can potentially mean the difference between life and death, and can influence the length of hospital stay, and the hospital costs [19,20]. For kids in communities with high prevalence of infectious diseases, limited access to clean drinking water, nutrient scarcity, breast milk constituents can reduce the risk of lethal diarrheal disease [21] or malnutrition [22].

Moreover, since many studies collect data at a single point in time, rather than longitudinally, we can’t always identify at which age each individual infant reaches a threshold weaning state. Much like primatologists predict weaning occurs when birth weight is tripled or quadrupled, other milestones or thresholds may influence weaning. We recently observed no differences in health and growth parameters among Tanzanian children weaned before or after two years of age [23]. What we can’t know, was whether or not the condition of those individuals who weaned later would have faltered if they had been weaned earlier. Full-term, typically-developing, healthy babies of experienced mothers growing up suburban “WEIRD” populations have the luxury of milk mattering less than for the millions of babies whose early life experiences present more obstacles and challenges.

Similarly, since nutritional and environmental impacts have the strongest impacts earlier in development, as kids age, the effect of breast milk on cognition, health, behavior, and growth is expected to decrease. This is the crux of developmental programming. The age at which the benefits of each extra day of breastfeeding during complementary feeding converge to “no added value” for immune function, nutrition, metabolism, and psychological well being… we don’t have data to know. And whether or not continued breastfeeding should cross zero to detrimental consequences, I am not aware of any research that supports those claims either. Indeed, in a ground-breaking study that interviewed toddlers and children who were still breastfeeding, the older children reported that breastfeeding was a source of psychological comfort and was “better than chocolate” or “ice cream” to them [24].

Within our WEIRD American culture, we need to stop pretending that all mothers have all options. Aside from some medical conditions that hinder breastfeeding, many mothers cannot meet their breastfeeding goals because of economic realities, lack of social support, cultural barriers, and limitations in the medical training of their clinicians. Fewer than 350 hospitals in the US are designated “baby friendly” by offering “an optimal level of care for infant feeding and mother/baby bonding.” Some states don’t have ANY baby-friendly hospitals. Furthermore, the recommendations for exclusive breastfeeding for 6 months is challenging when one lives in a country without paid maternity leave. The Affordable Care Act mandates insurance coverage for high quality pumps, break time and break space for pumping, and storage space for collected breast milk… but employers are differentially compliant with these protections. In short, mothers may have economical, medical, cultural, and social constraints that impact the length of their lactation period.

So where does this leave us?

In 2005, Dror Mandel and colleagues [10] began their paper with the following sentence: “The optimal duration of breastfeeding is unknown.” Given the wide range of variation and continued limitations in the state of our knowledge, the idea that there is a specific adaptive age for weaning is not supported. There is no one way; there is no one size fits all.

So many people approach breastfeeding topics as black and white. But behavioral biology is entirely shades of gray—and way more than 50. Biological systems are exquisitely complex. Humans as biocultural organisms are confronted by the realities of the cultural and individual contexts in which we produce and rear our young.

Grappling with that complexity, as lactation biologists, neonatologists, and food scientists can tell you, precludes excessive claims relying on logical fallacies, intuitions, or non-existent data. Such claims are predicated on “all else being equal.” But all else is never equal, and how any given mother weighs each of her considerations will ALWAYS be specific to her individual situation. There is no one way; there is no “one size fits all.”