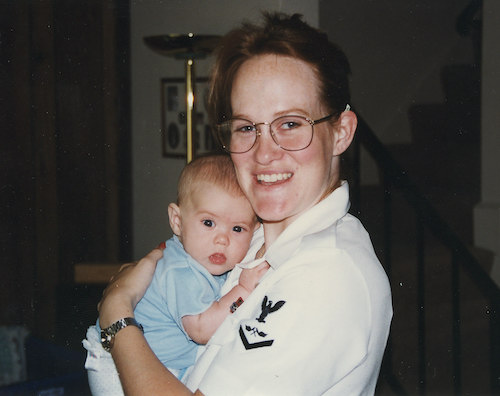 Back in the 1990s, when she had her first child, Robyn Roche-Paull was an aircraft mechanic in the United States Navy. She knew she wanted to breastfeed as long as possible, but her maternity leave was six weeks long, and then, in theory, she could be deployed to any part of the world. At that time, there was no military policy to facilitate pumping at her workplace, though she persevered. She would pump in the supply closet or the bathroom. “It was very, very difficult. The outlet I needed to plug my pump in was right by the bathroom door, and people would come in an out all the time—so the door was always opening to the hallway, with me standing right there,” she explains.

Despite daily struggles, Roche-Paull managed to breastfeed for a whole year while on active duty. The experience proved to be formative. Today, she works as a qualified lactation consultant and registered nurse with the US Army, and for eight years has been the executive director of “Breastfeeding in Combat Boots,” a nonprofit organization that seeks to support military mothers by providing advice, information, and inspiration for those who wish to breastfeed.

But the route to her current success has been bittersweet. When she and her husband decided to have more kids, there seemed little option but to leave her job. So, while her husband remained in the military, she put in volunteer hours at the Leche League and hit the books—and she left school a few years later with a nursing degree. The final-year dissertation required students to do something to help their community, so Roche-Paull wrote about how to help support breastfeeding women in the military. Soon lactation consultants started asking to share her dissertation with their colleagues. Then a publisher picked it up.

Roche-Paull began the book-writing process by setting up a Facebook page to gather stories from serving mothers and give her academic material more color. As women posted, she would reply to their messages with advice, and soon found that others who visited the page would do the same. “And that went way crazier than I thought,” she says. “It turned into a virtual support group. I started with a couple of people and now I’ve got 17,000 followers.”

The reason for the page’s popularity is not all positive—it also reflects unmet demand. Roche-Paull had struggled with a lack of military breastfeeding policy in the 1990s, and since then improvements have been slow to emerge. Only as of 2015 have all branches of the US military had rules and guidance for mothers who would like to breastfeed, and for their commanding officers. “Before it was sort of a free for all. If you had someone in charge who wasn’t supportive, then nothing happened—they didn’t do anything, they didn’t help you. The fact that we now have policies across all of the branches is huge,” says Roche-Paull.

The US Army was the last to put in place a policy. But, Roche-Paull acknowledges, it is the best because it embraces specifics. It states that moms who wish to pump should be provided with a locked room that has a table, a chair, and electrical outlet, and that the room cannot be a restroom. They should be given 15 to 30 minutes, every three to four hours.

In some ways, it is huge progress. Even as recently as 1972, women were discharged from the US Navy if they had a child. But all of the military policies—and each branch has different pumping regulations—still, put the onus on the mother to make it work. “If you’re out in the field, or something like that, you’re gonna have to think outside the box,” explains Roche-Paull. “Where is there going to be a place to pump? Is it going to be in the tent? Is it going to be turned around behind a tree with your jacket pulled up around you?”

Storing milk is another issue. Often military moms can use a communal refrigerator, or keep their milk in insulated packs that come with most pumping kits. “I’ve worked [with] moms who were sent out for two or three weeks and they would take a big cooler with them. And they’d get ice from the cooks to keep the milk cold. If there’s a truck coming to deliver supplies and mom’s got a week’s worth of milk stored up, then she sends her cooler back with the truck—and dad picks it up at home base. And hopefully, she brought two coolers with her…” Roche-Paull relishes recounting these tales of resourcefulness and success—there’s the one about the officer who sent milk back from Afghanistan via DHL, and the pictures she was sent of a woman pumping at the firing range, her rifle rested up against the wall and guys shooting behind her. “But,” adds Roche-Paull with a pause, “it’s all on the individual.”

There’s very little data to characterize what this means for breastfeeding success in the military. One survey of the US Navy, published in 2009—after Navy breastfeeding policies were in place—found that almost two-thirds of enlisted women and half of female officers who started breastfeeding reported stopping because of a work-related issue. Comparing the US Navy to the Department of Health and Human Services’ 2010 Healthy People objectives, the study concludes: “the reality of breastfeeding once the women return to duty shows an even larger difference from those goals; whereas the goal is 50% breastfeeding at 6 months; 30% plan to do so but only 13% actually do.”

Roche-Paull thinks that many of the remaining problems are cultural. “People often don’t understand why pumping needs to be done. There’s still a male-dominated culture—the sense that women don’t belong here, and now you are here, you want to do this totally feminine-women-thing. Why are we giving you breaks to go do this?” Sometimes senior women who do not have children, or who had infants when there were no breastfeeding policies in place, are among the least understanding, says Roche-Paull. “They kind of have this eat-your-young attitude. Well it didn’t work for me so I’m not going to let it work for you either.”

One policy that would undoubtedly make a difference is longer maternity leave. After searching for years to find sister organizations to Breastfeeding in Combat Boots in other countries, Roche-Paull has realized that they probably don’t exist because militaries elsewhere tend to give new mothers much longer leaves before they are required to return to work. In Canada, for example, female military personnel get a year’s maternity leave. Roche-Paull has also been researching pumping and milk storage policies in other countries. “I’m having a hard time finding them. Again, because you all have great maternity leave policies, it’s a moot point.”