Why Breastfeeding Protects against the Most Dangerous Type of Breast Cancer 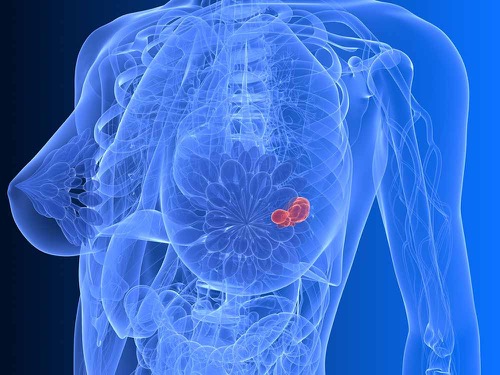 For some time it has been known that women who have their first pregnancy in their twenties, who have many children, and who breastfeed for extended periods have a lower risk of developing breast cancer than other women. It has also been well-established that the link between breastfeeding and lower risk is strongest for triple-negative breast cancer, a particularly dangerous form of the disease. Until recently, however, science has been unable to explain why. In a series of experiments, researchers at the University of Manchester and the University of Edinburgh, in the UK, have now demonstrated that the production of a milk protein called alpha-casein confers protection in human cells. It does this by downregulating signals that induce and maintain a population of tumor cells called breast cancer stem cells [1]. The work suggests a new avenue for developing small molecule drugs.

Triple-negative breast cancer gets its name from the absence of three types of receptor on the surface of its tumor cells. The disease is in fact a group of cancers that share this characteristic. Because of the lack of these receptors—specifically, receptors for the hormones estrogen and progesterone, and HER2 receptors—there are no targets for common hormone therapies and drugs like Herceptin, making triple-negative breast cancer especially hard for doctors to treat.

Triple-negative breast cancers contain a small group of cells that are the core of the problem. These stem cells populate other cells that form the tumor, and are associated with metastasis. The development of stem cell characteristics is in turn promoted by another kind of cell that surrounds the breast cancer: “activated” fibroblasts. These are normal fibroblasts (i.e., connective tissue cells) that produce the proteins “alpha-smooth muscle actin” and “fibroblast activation protein-alpha.” When fibroblasts around a breast cancer are activated, they secrete a lot of interleukin-6, a signalling molecule that can encourage normal cells to behave like stem cells [2].

To make the point that alpha-casein influences the development of triple-negative breast cancer, the research team, led by Kirsten Garner of the University of Manchester, first observed that cancer cells make an unusually low level of this protein. With data on alpha-casein gene expression from 250 samples of different triple-negative breast cancers, they demonstrated that the lower the expression levels, the greater the odds of patients surviving without relapse. Then, to probe the mechanism underlying this pattern, the researchers set up populations of triple-negative cancer cells that were all induced to start producing unusually large amounts of alpha-casein. They tested whether this affected the activity of an enzyme—aldehyde dehydrogenase—that is associated with poor outcomes in breast cancer. The results showed that large amounts of alpha-casein indeed cut the enzyme’s activity, compared with cells that produced normal amounts. This finding suggested that alpha-casein works by affecting cancer stem cells.

The link between alpha-casein and stem cells established, the next task was to explain it. To do this, the team then created populations of breast cancer cells in cultures, and used viruses to insert genes into them that would facilitate the measurement of levels of something called HIF-1alpha, which regulates the expression of many genes. Fibroblasts make large amounts of HIF-1alpha when they become activated, and as such, lots of HIF-1alpha is understood by oncologists to be a sign that these cells have developed into a cancer-promoting environment.

When these populations of breast cancer cells were cultured for 72 hours in alpha-casein—effectively, soaked in it—the fibroblasts made very little HIF-1alpha. Up to 72 hours, the effect proved to be dose-dependent: the more hours of incubation in alpha-casein, the less HIF-1alpha the fibroblasts made. By contrast, alpha-casein incubation did not affect levels of other gene-regulating molecules that the team also tested. In the paper they write, “we note that fibroblasts are not exposed to milk proteins in intact homeostatic mammary tissue but envisage that in the context of mammary remodelling during lactation, weaning and involution, the fibroblasts will be exposed to milk that builds up in the ducts and leaks into the tumour microenvironment.”

The fact that HIF-1alpha levels varied according to the presence of alpha-casein does not necessarily mean that the two kinds of molecule directly interact. Instead, alpha-casein might affect something that goes on to affect the levels of HIF-1alpha. Through further experiments, Garner and her colleagues demonstrated that powerful gene regulatory factors called STAT1 and STAT3 are crucial in regulating HIF-1alpha levels. When alpha-casein affects STAT1, this leads to reductions in HIF-1alpha in activated fibroblasts. Conversely, when it affects STAT3, it lowers HIF-1alpha levels in breast cancer stem cells, indicating that the cells have reduced activity. In this way, alpha-casein reduces triple-negative breast cancer risk via two mechanisms. These findings suggest that drugs that target STAT1 and STAT3 might help to fight this aggressive form of breast cancer.

This work helps explain a medical mystery. In short, the more time women spend breastfeeding, the longer that cells of their breast tissue are likely to be exposed to alpha-casein, and this implies the longer that the initiation of triple-negative breast cancer is inhibited by alpha-casein’s effect on STAT1 and STAT3. Most importantly, getting to grips with the details of the mechanisms by which lactation protects against this disease is good news for women everywhere, whether or not they have breastfed.