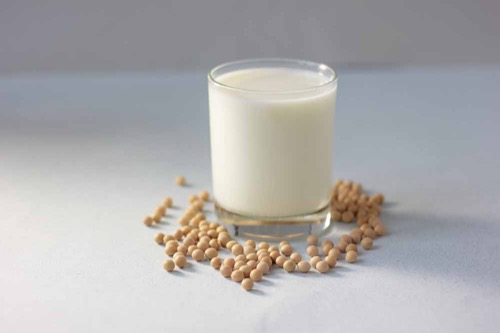 Humans domesticated soybeans over 10,000 years ago—roughly the same time that cattle were domesticated—so it should be no surprise that soy “milk” is the original plant-based milk alternative [1]. The first soymilk, believed to have originated in China over 2,000 years ago, was a byproduct from the tofu-making process and was much more like bean-flavored water than the “milk” you find in grocery stores today. Thanks to thickening agents and emulsifiers (as well as many other technological advancements that remove components associated with the “beany” flavor), soymilk has become one of the most widely consumed plant-based milk alternatives in the U.S. and across the globe [1, 2].

Many consumers select soymilk because of the unique health benefits provided from soybeans, including high protein and high isoflavone (phytoestrogen) content. Indeed, across all plant-based milk alternatives, soymilk is the only one to match cow milk in protein content. But consumers may be surprised to find out that many of soy’s natural components actually act to limit the body’s ability to absorb several essential nutrients [2]. Moreover, the very agents used to transform it from bean water to milk may actually have negative impacts on health [2]. When considering soymilk as a nutritional substitute for cow milk, it is important to consider the content and availability of all nutrients. Soymilk has most certainly come a long way in terms of taste and texture over the last 2,000 years, but a bean is simply unable to match a cow when it comes to the business of making milk.

With a diet highly dependent on soybeans and a dearth of dairy cattle, it is no surprise that early Chinese cultures manufactured soy milk. But what’s the appeal for modern-day humans? Compared with other plants used to produce milk alternatives (e.g., almonds, rice, coconut), soybean proteins provide all nine of the essential amino acids (that is, the amino acids the human body cannot make on its own) and are therefore considered a complete protein [1-4]. Whey protein, one of the two classes of proteins in mammal milk, also contains all essential amino acids, making milk a complete protein source as well [4]. Indeed, both whey and soy receive a score of 1.0 (the highest score on the scale) on the digestible indispensable amino acid scale (DIAAS), a measure of protein quality [4].

Soymilk is the only plant-based milk alternative to match cow milk’s protein content; both provide 8 grams of protein per cup [1, 4]. And yet despite these similarities, they are not interchangeable sources of protein. In addition to essential amino acids, milk protein includes biologically active components, including immune factors and peptides. Although their intended consumer was a baby cow, many of milk’s bioactive ingredients have demonstrated benefits to human consumers as well, including improving glucose metabolism, controlling appetite, and building muscle.

The casein component of milk protein also gives milk an edge over soy and all other plant-based milks. Milk’s casein proteins are delivered as micelles, small spheres containing both water-loving and water-phobic proteins. Once these micelles reach the stomach, digestive enzymes snip away at the water-loving proteins, transforming the soluble micelle into an insoluble curd. Milk may have started out as a liquid, but casein protein digestion effectively transforms it into a solid meal. Increased digestive time offers many advantages, including increased satiety, slower release and digestion of amino acids, and improved absorption of casein-bound calcium.

Mammal milks contain maternally-derived hormones, such as cortisol, adiponectin, and estrogen, which influence infant growth and development. Soymilk does not have cortisol or adiponectin, but it actually contains plant-derived compounds that are molecularly similar to estrogen. The structural similarity allows these plant compounds, called isoflavones, to mimic the effects of estrogen (hence, their classification as phytoestrogens). But is this a good thing for consumers?

First off, it is important to point out that the estrogenic effect of isoflavones is considerably weaker than the estrogen our own bodies manufacture; a cup of soymilk is not the hormonal equivalent of a birth control pill. Secondly, isoflavones have both estrogen-agonist and estrogen-antagonist activities [5]. Sometimes, isoflavones bind to a cell’s estrogen receptor and elicit a cellular response similar to that of estrogen. However, it is also possible that they bind to the estrogen receptor and nothing happens. But when an actual (human-made) estrogen molecule comes along looking to bind, the receptor is now blocked; by stealing its binding site, the isoflavone has kept estrogen from acting on that cell. Depending on which physiological system you are interested in, both actions can have health benefits or risks. Potential benefits under investigation for post-menopausal women include reduced bone loss and lower rates of some cancers [3, 5-7]. For children, men, and pre-menopausal women, the health benefits of isoflavones are less well understood, and they could potentially act as endocrine disruptors.

Bean water may offer a lot of protein and isoflavones, but those are not the only cow milk ingredients consumers are looking for in a milk-alternative beverage. Cow milk and dairy foods are the best dietary sources of calcium in U.S. diets because of their high calcium concentration and bioavailability. In order to compete as a milk-alternative, soy and other plant-based milks are fortified with calcium. Indeed, many even boast that they offer more calcium than cow milk. Unfortunately, consumers may not be getting as much calcium out of their cup of soymilk as the carton advertises. Soybeans contain a compound called phytic acid, which binds to minerals, including calcium, and prevents their absorption. Phytic acid also binds to iron. So even though soymilk beats cow milk when it comes to iron content [1, 2, 8], the presence of this anti-nutrient in the soymilk may significantly reduce the amount of iron that actually makes its way from the digestive tract to the circulation [1, 2, 4, 8].

Individuals that switch from cow to soy milk may also find themselves deficient in iodine. Dairy foods are the best dietary source of iodine; soy, almond, and rice milks contain only trace amounts. Moreover, natural ingredients in soybeans may interfere with the thyroid’s ability to absorb iodine, which could act to further increase the risk of iodine deficiency.

Soymilk’s high protein content, healthy polyunsaturated fats, and lack of cholesterol make it an appealing alternative to cow milk. This appeal increases when considering the possibility that isoflavones may provide unique health benefits to post-menopausal women, such as reduced risk of bone loss or breast cancer. But consuming soymilk because it is a healthy beverage and using it to replace cow milk and other dairy in the diet are two very different nutritional strategies. Compared with nut, rice, and coconut milk, soymilk offers the closest nutritional profile to cow milk (which may explain why it has been used as an alternate protein source for infant formula for over 40 years). Those that select soy because of cow milk protein allergy or lactose intolerance, or a commitment to animal-free diets may want to make sure that they are getting essential nutrients, such as calcium, iron, and iodine, from other dietary sources.