A Whale of a (Milk) Tale 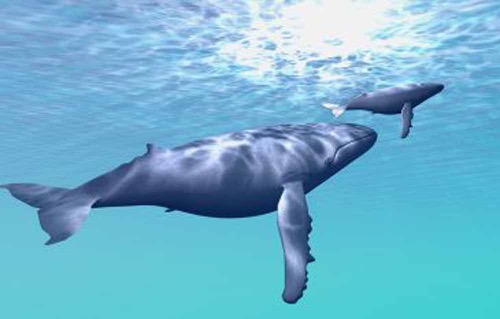 How much weight should a female gain during pregnancy? Forty-five thousand kilograms (or nearly 100,000 pounds) may seem an excessive amount, unless of course the question is directed at the blue whale (Balaenoptera musculus), the largest animal on the planet. Blue whales, along with other species of baleen whales, are remarkable for their ability to put on massive amounts of blubber during pregnancy. What may be even more remarkable, however, is their ability to quickly transfer that stored energy to their developing calf during lactation, all while consuming little, if any, food. But not all whales share this intense lactation strategy. The toothed whales (the evolutionary “cousins” of baleen whales) are the tortoise to the baleen whales’ hare, taking the slow and steady approach to milk production that is reminiscent of humans and other primate species. Why don’t the baleen whales pace themselves a bit more? Or, alternatively, why don’t the toothed whales pick up some speed? The evolution of two such dramatically different strategies in these closely related marine mammals can only be understood in the context of the species’ entire life course. After all, evolutionary success is not about winning a sprint, but successfully playing the long game.

Cetaceans are an order of mammals divided into two suborders: the baleen whales (Suborder mysticetes) and the toothed whales (Suborder Ondocetes). These two groups diverged approximately 38 million years ago, and the common ancestor had teeth, rather than baleen [1]. Baleen is made out of keratin, the same substance that makes up your fingernails, and baleen whales use it in a unique way to obtain food. Plates of baleen, each fringed by a network of hair-like threads, descend from the upper jawbone like teeth on a comb. Baleen whales open their mouths and take in huge quantities of water along with choice food items—often tiny—swimming in that water. Then, using their tongues, they push the water back out through the baleen like a filter, leaving behind the small fish, plankton, and krill (a small shrimp) that they swallow. One krill may not have many calories, but some estimates suggest a blue whale can eat up to four tons (8,000 lbs) of krill in a single day [2]!

Toothed whales (a group that also includes all dolphins and porpoises) have to work a little harder than simply gulping their food. They are active hunters that seek out and snatch fish, squid, or in the case of some killer whales, large marine mammals. Many toothed whales utilize echolocation to find their prey—like bats, they emit sound waves and use the sound waves that return to determine prey size and location (as well as information about their surrounding environment, such as distance to the ocean floor).

Saving for a milky day

The ways in which baleen and toothed whales make their living are intimately tied to their specific patterns and rate of growth, development, and reproduction. This includes their lactation strategy, which is described by the milk composition, quantity, the frequency of nursing, and the total duration of the lactation period. Baleen whales have developed a lactation strategy that Dr. Olav Oftedal, Emeritus Scientist for the Smithsonian Environmental Research Center and the world’s foremost authority on marine mammal lactation, describes as “intensive,” whereas that of toothed whales is “extensive” [3]. These terms refer not only to the time investment from the mother, but also to the amounts of nutrients transferred and the source of those nutrients.

Baleen whales travel great distances from their feeding grounds to their breeding grounds. In winter, they mate in warmer waters and then travel to higher latitudes with colder waters to feed and fatten up during the summer. Then, they travel back to warmer waters to give birth and nurse their offspring. By the time mothers and calves return in late spring to colder waters to feed (approximately six to seven months later), the calves have been weaned [3, 4]. For mammals of their body size, a lactation period of only six months is extremely short (for comparison, the largest land mammal, the African elephant, weighs 12,000 pounds and can nurse for up to four years). But when the quality and quantity of milk are examined, this “short” nursing period seems unbelievably impressive.

At peak lactation (the period just before offspring begin consuming foods other than milk), baleen whales produce milk with 30–50% fat [3, 4]. And they make a lot of it—Oftedal estimates that the blue whale can transfer up to 4,000 megajoules per day, or nearly 1,000,000 kilocalories [3]!

These numbers become all the more extraordinary when you consider that the majority of lactation takes place in warmer waters, which means that the mothers are consuming little, if any food. Energy for lactation in baleen whales comes largely from maternal energy stores of blubber [3]. The body mass of a lactating blue whale has been estimated at 120,000 kilograms (or approximately 265,000 pounds), an increase of 45,000 kilograms over pre-pregnancy body mass. If you are having a hard time picturing just how large 120,000 kilograms actually is, Oftedal provides some perspective: “The body mass of a lactating blue whale is equivalent to 40 lactating elephants, 2000 lactating human females, or 48 million lactating pygmy shrews.”

Baleen whales are not the only mammals to fast during lactation; this strategy is also seen in bears and seals. Not surprisingly, these mammals are also large. “Getting big allows you to have options available that are not available to smaller animals,” says Oftedal. Namely, bigger mammals can store more energy than smaller mammals, and can hang on to that energy for longer periods of time [5]. But baleen whales and other marine mammals have an additional advantage not available to large terrestrial mammals: buoyancy. “Their aquatic environment allows them to carry much more body mass,” explains Oftedal “because the costs of locomotion are much lower.”

The extremely intense lactation strategy of baleen whales is thus only possible because of their immense body size and their aquatic environment. But relying exclusively on body stores seems like a demanding strategy—and why all the rush? Why don’t baleen whales simply remain in one area with a reliable food source nearby to calve and lactate? According to Oftedal, there are three standard responses provided by marine biologists: seasonal food abundance, thermoregulation, and predator avoidance. Food resources “bloom” in high latitude seas in late spring and summer. But whale calves are born with less body fat than their parents, and the frigid waters would lead to heat loss in neonates. In addition, fewer predators (e.g., killer whales) are present in the sheltered bays and warmer waters favored by lactating mothers, again enhancing offspring survival. From the perspective of evolution, a strategy that is risky or demanding can be maintained by natural selection if it is offset by the benefit of increased reproductive success. Apparently, the opportunity of a seasonally rich food source outweighs the costs and hazards of global travel.

Not fasting, and not too fast

On the other side of that coin lie the potential risks associated with an extended period of lactation. A longer duration of lactation means a longer wait until offspring independence; the more time it takes for the offspring to become independent (and reproductively capable), the greater the risk that they will never make it to independence. Investment in an offspring that never reproduces is, from the perspective of natural selection, equal to never reproducing. So why would toothed whales have evolved such a strategy?

“Large brains, complex interactions, and complex social groups,” explains Oftedal. Toothed whales have relatively large brain sizes, which require a long period of development after birth. These larger brain sizes are directly related to their social behavior; toothed whales live in larger social groups than baleen whales and “have much more complex social interactions between group members,” says Oftedal. These interactions take time to learn, and these brains take time to grow (for perspective, bottlenose dolphins weighing near 500 kilograms nurse for up to 3 years, perhaps even longer) [3].

There is another order of mammals with large brains, an emphasis on learning, and slow postnatal growth rates—primates. And although they share very little with each other in regard to environment, primates and toothed whales have strikingly similar lactation strategies: longer duration of lactation, no maternal fasting while nursing, and lower daily costs of lactation. “You see convergence between these two taxa because the selective pressures are similar,” explains Oftedal.

Milk from toothed whales is not nearly as dilute as primate milk, as whales and dolphins face a thermal challenge not found in terrestrial mammals (they, like baleen whales, have to provide fat and energy for deposition of insulating blubber in their offspring). However, toothed whales do produce milk that is lower in fat and higher in water than their cousins, the baleen whales, demonstrating some convergence with the very distantly related primates [3].

Exceptions to the rule

Although most baleen whales follow the intensive approach and most toothed whales the extensive approach, there are several notable exceptions. And for Oftedal, this is where the research gets really interesting. “There is more diversity than we realize within each type of cetacean,” says Oftedal. “There are broad patterns, for sure, but we can not say that all baleen whales or all toothed whales are the same when it comes to lactation.”

Take, for example, the bowhead whale. Bowheads are baleen whales, but have a different reproductive strategy than their closest relatives—calves are born in late spring in cold waters and nurse for relatively long periods of time, all while the mothers are consuming food [4]. Why did they diverge? How are they able to get around the constraints of cold water and high predation rates?

There is an interesting exception within the toothed whales as well—the harbor porpoise, for example, is more like a hare than a tortoise. Their lactation is much shorter than other dolphins and porpoises (8 months vs. several years), as is their inter-birth interval (one year) and total lifespan (10 years) [3, 4]. When and why did they diverge from other porpoises to follow this more intense life history pattern?

Unfortunately, it may not be possible to ever fully understand the extent of variation within each group nor the reasons for the diversity because the data on whale lactation, particularly milk synthesis, are opportunistic and fragmentary. Most of what we know about the composition of milks comes from samples removed from mammary glands of hunted cetaceans, during the time when such practices were permitted [3]. And unfortunately, additional data points are rare (but see work by West and colleagues with bottlenose dolphins [6]) as there are numerous methodological obstacles in collecting from living whales and dolphins, both in the wild and captivity.

A blessing and a curse

Oftedal ended his publication on lactation in cetaceans by reflecting on the awe-inspiring maternal capabilities of the baleen whales, and it seems a fitting way to end this tale of whale lactation as well [1]. The amount of energy that mothers transfer to offspring during lactation is measured in six digits of kilocalories per day (per day!), and even more mind-blowing is the fact that this energy is derived so predominantly from blubber stores accumulated during pregnancy.

But this remarkable evolutionary adaptation proved to be a curse. Large blubber stores made them highly sought after targets for whalers. Populations of most baleen whales (and the sperm whale, a toothed species) were decimated by nineteenth and twentieth century whale hunters; it is ironic that much of what we know about their lactation is the product of a practice that placed these species in danger of extinction.

Data on milk components of both baleen and toothed whales mainly come from samples removed from mammary glands of hunted whales plus some data on stranded animals [3, 4]. Thus, successful protection and conservation of these amazing mammals may limit our understanding of the lactation of many cetacean species, but this is surely a worthwhile tradeoff.