The Ups and Downs of Genetic Selection in Dairy Cattle 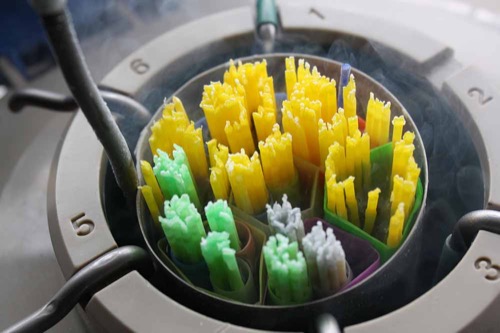 Selective breeding of animals has underpinned enormous production gains and farming efficiencies in dairy. But what has been the impact of intensive selection on the modern dairy cow? Armed with recent advances in genomics, scientists are beginning to answer this question.

One of the most significant issues in dairy production in recent times is a falling rate of cow fertility. Of course, this is a challenge for farmers, who must manage the pregnancy and lactation phases of their herds to maintain levels of milk production and hence the farm’s economic viability. Physiologists and nutritionists studying this area have identified that an underlying cause is the competition for energy supply between what is required to establish a pregnancy and the demands of the udder during peak milk production. So, the more energy that goes into producing milk, the less energy is available to devote to ovulation, implantation and embryo development. However, in Nordic Red dairy cattle, Kadri et al. from Aarhus University in Denmark, along with colleagues from Belgium and Finland, have now discovered another explanation. In the January 2014 issue of PLoS Genetics (1), they described a section of the bovine genome that simultaneously contributes to higher levels of milk production and lower levels of fertility. So, developing herds based on milk produced has meant that, as milk output has gone up, fertility has gone down in these breeds.

The combination of genetics and artificial insemination has brought substantial and widespread improvements in dairy production. A champion bull may contribute to hundreds, or even thousands, of daughters in dairy herds, nationally or sometimes internationally. This improvement in dairy production has been through several phases of development, and much of the gain in the past 25–30 years has been on the basis of bull-proving systems that estimate the genetic “value” of a bull based on the productivity of progeny. Recently, this approach has been complemented, or in some cases replaced, by the introduction of methods based on genomic selection (2–4). Genomic selection uses DNA-based methods rather than progeny testing (5), and has been made possible by the bovine sequencing project and the associated development of powerful, low-cost genotyping tools (6, 7). Whatever the system, these procedures have been developed to improve returns for farmers by making farming systems more efficient, so it is not surprising that selection has been heavily weighted toward production traits that deliver more milk, or milk with a particular quality, e.g. increased milk fat, or higher milk protein yield. What has been known by geneticists for many years is that certain traits overlap, i.e. there are regions in the genome that contribute to more than one outcome, and sometimes the same region can have an opposing or antagonistic effect on these traits. What was described by Kadri et al. is a prime example of how antagonistic effects may happen in dairy cattle.

Kadri et al. began with a traditional approach to investigate the genetic basis of fertility in dairy cattle. This approach has been notoriously difficult because measures of fertility in dairy cows vary considerably, and the way in which it is measured does not correspond closely with genetic effects (low heritability). However, these investigators had collated an excellent set of data from a very large number of records and several dairy breeds. When the data were analyzed, a region of the genome stood out that was statistically associated with rates of conception. Then the detailed detective work started. By combing through records that might in many circumstances have been filtered out before analysis, they discovered that in the Nordic Red cattle, there was a relatively small piece of DNA missing in some animals. This is not unusual; if genome sequences are compared between groups of individuals, there are many regions that may be duplicated or deleted in some animals and not others. However, in this case, when they compared the fertility data, they found that the missing piece accounted for low levels of fertility. To their surprise, they also found that, despite it contributing to low fertility rates, the missing piece of DNA was present in a lot of animals. Why would an apparently deleterious mutation not get weeded out of herds? The most likely explanation was that it was under positive selection, that is, it was providing benefits to production. Indeed, when Kadri et al. reanalyzed the data looking at milk production traits, this very same region was contributing to higher levels of milk production.

Of course higher milk production could only happen in animals that had inherited one copy of the deletion. When deleted regions contain genes essential for embryo survival, a calf will not be born if DNA containing the deleted region is inherited from both sire and dam. So, in the animals that were studied, those that had inherited a chromosome with a deletion in that region, and one without the deletion, they not only survived, but grew up to be cows that produced impressive volumes of milk. When selection based on milk yield progressed over many generations, the deletion was positively selected and its occurrence in the dairy herds gradually increased. As more animals with the deletion appeared in the herd, the overall production of milk may have increased, but overall fertility decreased. What can cause both positive and negative effects? This usually indicates a gene with a regulatory function. There are four genes in this region of the genome that come under consideration as a first step to understanding the biology. Kadri et al. suggest that a gene called RNASEH2B may provide the explanation, because it also prevents embryo development when deleted in mice. However, they do not rule out other potential explanations, including effects from neighboring genes, and there certainly appears to be others around that region that may have regulatory functions. For now, it remains a mystery, but like any good detective story, all will be revealed in the final chapter.