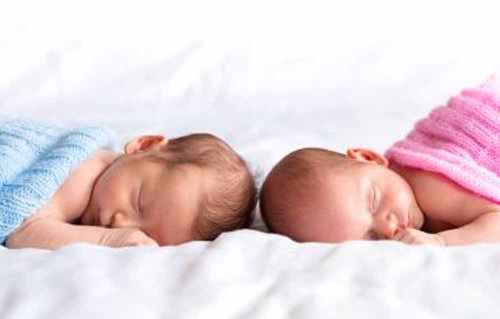 Lactation biologists have long known that human milk synthesis varies across and within mothers. In the search for sources of this variation, the spotlight has been primarily directed at maternal factors. But it takes two to nurse, and human infants are not simply passive consumers of milk. Infant characteristics, from low birth weight [1] to illness [2], are known to affect milk synthesis, primarily through an increase in the very ingredients needed to improve infant health, growth, or cognitive development. Human milk appears to be tailored to specific infant needs—one milk does not fit all.

Illness and birth weight are temporary characteristics that are associated with short-term alterations in milk composition. But what about something permanent, like infant sex? Do human mothers produce milk with different types or quantities of ingredients for boys compared with girls? Maybe—there have only been a handful of studies that compared human milk composition for boy and girl infants, and not all found evidence for sex-specific production [3–5]. However, the results of a new study [6] on growth in twins push that “maybe” closer to “yes.” Kanazawa and Segal found that same sex (SS) twins were taller and heavier than opposite sex (OS) twins but only if they were breastfed [6]. Could access to sex-specific milk be responsible for the growth advantage to SS twins?

To relate evolutionary success to milk production, just look at differences between the sexes in growth patterns [7]. Human males are generally larger than females at birth and during infancy, have a later age at puberty, later start of the adolescent growth spurt, and cease skeletal growth as much as five years later than females [7]. Larger body size during infancy and throughout the life course may correlate with more energetically dense milk production for boys (including greater quantities of fat as an energy source and protein as a growth substrate), while an earlier puberty (and adolescent growth spurt) in females may favor production of milk components, including calcium and phosphorus, that aid in skeletal maturation.

Indeed, these are the very differences evolutionary biologist Katie Hinde identified in rhesus macaques milk [8–10]. Mothers of sons produced milk with higher fat and protein (and thus total calories) than those of daughters, while daughters received greater quantities of milk with higher concentrations of calcium. However, these signatures of male and female milk were more pronounced in first time mothers compared with those that already had offspring. Hinde suggests that first time mothers, who may still be growing and have fewer energetic resources than more experienced mothers, “cut corners” with daughters and produce lower quality milk because body size is less important for reproductive success in females than it is in males [8–10].

Human females may also produce higher energy milk for males. In a sample of 25 American mothers, those with sons (aged 2–5 months) produced milk with 25% more energy than those with daughters [3], and mothers of 4-month-old sons (n = 25) in Singapore produced milk with more fat, including more polyunsaturated fatty acids, compared with those with 4-month-old daughters (n = 25) [4]. Neither of these studies, however, measured milk volume or controlled for first versus later born offspring. In contrast, Quinn [5] failed to identify any significant differences in milk fat, protein, or total energy content relative to infant sex (or maternal experience) in her sample of over 100 Filipino mothers. In addition, sons and daughters (both first- and later born) nursed with similar frequency, suggesting they received similar quantities of milk [5].

Thus, it is not clear from available data on milk composition if there is a recipe for success for boys versus girls. If the data from rhesus macaques are included to look at an overall pattern in primates, sex-specific milk production may be limited to first time mothers and/or may involve differences in quantity of milk rather than simply milk energy, factors that have not been systematically investigated in humans.

Evolutionary psychologist Satoshi Kanazawa at the London School of Economics and Political Science and his colleague Nancy Segal at California State University, Fullerton, decided to tackle the issue of sex-specific milk production using a novel approach. Rather than collect and compare milk samples, they focused on growth data from twins [6]. They reasoned that if mothers were tailoring milk production to optimize the growth and development of boys or girls, mothers of OS twins would be in a biological pickle—they could not simultaneously produce milk tailored for a boy and a girl. Milk for OS twins could either be tailored for one sex or for neither sex. As a result, breastfed SS twins were predicted to have a growth advantage over breastfed OS twins [6].

To test this prediction, Kanazawa and Segal [6] utilized growth data from the National Longitudinal Study of Adolescent Health (Add Health). Over 20,000 American adolescents were interviewed (and measured) at four time points (or waves) between 1994 and 2008 (between the ages of approximately 15 and 29 years). From the larger sample, 779 individuals had either an SS twin (n = 546) or OS twin (n = 233). Data on breastfeeding came from interviews with mothers and were analyzed in the statistical models as never breastfed or ever breastfed, with the latter category including all individuals who were reportedly nursed for at least three months.

In addition to the categories of SS or OS twin and ever or never breastfed, the authors included several other variables that could potentially influence height and weight during adolescence, as these could potentially confound their results. These included birth weight (larger babies may be larger adolescents); sex (a female from a female/female twin pair was compared with a female from a female/male twin pair); age at time of measurement; and finally, zygosity, or whether the twins were identical (one fertilized egg) or fraternal (two fertilized eggs), a trait that may influence body size [6].

At the first wave (mean age = 15.6 years), no significant differences were found in height or weight between breastfed OS and SS twins. But at each of the other three waves (mean ages of 16.2, 22.0, and 29.1 years), breastfed OS twins were significantly shorter (nearly an inch) and lighter (by about 12 pounds) than breastfed SS twins. This finding alone is suggestive of tailored milk production, but the researchers found something even more telling.

“The original analysis only included the breastfed same sex and opposite sex twins, and demonstrated that the same sex twins were taller and bigger than opposite sex breastfed twins,” explains Dr. Satoshi Kanazawa. “But my friend, the great developmental psychologist Jay Belsky, told me that the best demonstration of causality is to make it disappear.”

Remembering the advice of Dr. Belsky, Kanazawa compared never breastfed twin groups. “If breastfeeding was causing the advantage enjoyed by same sex over opposite sex twins, then this advantage should disappear when you take breastfeeding away.” When the data were analyzed to compare never breastfed twin pairs, no significant differences were found in body size between SS and OS twins. In fact, SS twins tended to be slightly shorter and lighter than opposite-twins [6]. “It was a reverse of the pattern found in breastfed twins,” continued Kanazawa. “I was glad that I listened to Jay’s words.”

From infancy and beyond

Although the focus of the study [6] was sex-specific milk production, the results highlight another amazing feature of lactation—the effects are not short-term and limited to infancy. But when do growth differences between twin types first begin? Are breastfed SS twins always larger than breastfed OS twins? Unfortunately, the Add Health dataset only provides metrics from age 15, so it is not clear when the observed differences in height and weight first appear, or if it is a general pattern throughout infancy and childhood.

However, the lack of significant differences in weight or height at the first measurement time point suggests that SS twins might not always enjoy a size advantage. “This was an unexpected finding of our study,” says Kanazawa. “We fully anticipated that we would observe an effect in all waves.” It is interesting that SS twins were taller and heavier at ages 16, 22, and 29 but not at 15, and the findings are difficult to explain without any data points during late childhood or early adolescence. One possibility is that the benefits (in both weight and height) of sex-specific milk on growth are not fully realized until the completion of the adolescent growth spurt. Perhaps the measurement at a mean age of 15.6 years was catching many—but not all—females at the end of their spurt and fewer males, who end their growth spurt at least a year later. Another possibility is that breastfed OS twins started their growth spurts earlier than breastfed SS twins. Thus, at the first time point OS were relatively the same size as SS twins who were still growing, resulting in similar weights and heights. Whatever the explanation, it is quite remarkable that breastfeeding, perhaps for as little as 3 months, can be linked with patterns and rates of growth experienced over a decade later.

Differences in body size between ever breastfed OS and SS twins (and a lack thereof between never breastfed twin types) indirectly support the hypothesis of sex-specific milk production. However, could there be another explanation for the reported results [6]? What else could be specific to identical twins of either sex but not OS twins that would result in attaining higher stature and body mass? Kanazawa and Segal propose alternative explanations but find none of them satisfactory [6]. Kanazawa believes that the results strongly suggest SS twins can benefit from tailored breast milk whereas OS twins “may be at a developmental disadvantage.” When it comes to milk production, sex matters.

As an evolutionary psychologist, Kanazawa is interested in ultimate explanations or identifying adaptations produced by natural selection. Mothers who produced milk with ingredients that best facilitate and support sex-specific patterns of growth and development would have greater reproductive success and leave more progeny that would, in turn, carry genes for sex-specific milk production. Just how mothers know the sex of their offspring is up for debate, but it is likely that because of human’s invasive placenta, hormones or other signals of infant sex communicate with the mammary gland prenatally [11]. Kanazawa believes that OS twins are unable to take advantage of tailored milk composition and thus “may be evolutionarily selected against.” Selection against OS twins actually begins much earlier than during lactation, he explains. “Twin researchers have always assumed that dizygotic twins were just as likely to be same sex as opposite sex. But in large population samples in the US and the UK, there are actually significantly more same sex than opposite sex dizygotic twins.” Assuming the rates of conception of SS and OS dizygotic twins are the same, this would mean that SS twins have a better survival rate in utero than do OS twins.

Are the issues with fetal survival and milk production somehow linked? Although purely speculation, it is certainly tempting to suggest that human gestation (and concomitant mammary gland development) operate most successfully when receiving information from just one sex. “Mixed signals” from OS twins may affect fetal growth patterns or result in the production of low quality milk, which could have lower energy or reduced immune components, growth hormones, probiotics, or any number of factors that relate to growth, development, and health.

The hypotheses stated above are testable and hopefully lactation biologists will continue to investigate milk production for evidence of a specific recipe for boys and girls. Thus far, much of the research has focused on macronutrients in milk. However, milk contains numerous bioactive ingredients, including hormones that influence skeletal growth and body composition. Expanding comparative studies to include a larger number of ingredients (and measures of volume) may reveal patterns that can help explain Kanazawa and Segal’s findings.