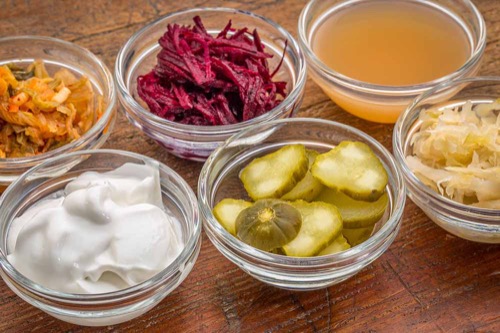 The idea of using probiotics in place of antibiotics was born in the dairy industry. But in recent years, humans as well as cows have been taking probiotics as alternative treatments for mastitis, especially as multidrug resistance has become more commonplace. Evidence that probiotics work has been gathering. Until recently no study had evaluated one easily available source of them—fermented foods such as kefir—alongside mastitis’ common risk factors. Based on interviews about fermented food-product consumption with more than 600 Turkish women, a new study finds that both the frequency with which mothers consume these foodstuffs, and the diversity of the products that they consume, are associated with lower odds of developing mastitis [1].

Turkey is the perfect place for such a study. First, fermented food products are popular there, and many different kinds are widely available. The study in question, by Pelin Basım and Yasar Ozdenkaya of Medipol University, in Istanbul, assessed the consumption of no fewer than six types of fermented foodstuffs. These included four liquid foods—kefir, homemade yogurt, conventional yogurt, boza (a fermented drink made from wheat and yeast)—and two more solid kinds of fermented foods, tarhana (a grain that is mixed with yogurt or fermented milk) and pickles. The pickles in question are vegetables such as cucumbers that are fermented with lactic acid bacteria, which, as in yogurt, are crucial to the fermentation (or pickling) process. Second, the specific substrains of lactic acid bacteria and yeasts found in Turkish fermented foods have been shown to be the same as those that are known to be effective in the treatment of staphylococcal mastitis [2]. This means that there was a good chance of the study finding a result, if a protective effect truly of consuming fermented foods exists.

The study established two groups of mothers. One group had not reported any signs of lactational mastitis. Before these women were included in the study, physicians examined their breasts to check that they were really infection-free. The same doctors examined mothers in the other group, which was made up of women who were having episodes of mastitis while they were breastfeeding. Sometimes ultrasound was used to check the diagnosis. On average, having mastitis or not was the only identified difference between the two groups, which were statistically the same by age, income, education, body mass index, and number of pregnancies and births.

The researchers administered a face-to-face interview, using a questionnaire, to both groups of mothers. The purpose of the questionnaire was not only to find out about fermented-foodstuff eating or drinking habits, but also to probe whether the women had risk factors that the medical literature associates with mastitis. Infection of the mammary gland has, for example, been linked to developing cracked nipples or some sort of nipple trauma, and to using antibiotics around the time of giving birth. For each of the six types of fermented foods in the study, the participants were asked whether they consumed them once or less than once per month, once a week, two or three types per week, or every day.

For the most part, the study confirmed that many of the protections against mastitis already found in the literature appear to work in the Turkish context. Of particular note, receiving breastfeeding education from an expert was linked to ten times greater protection against developing mastitis than not doing so. Moreover, women in the group confirmed to not have mastitis on average consumed three different kinds of fermented foodstuffs; those in the group with mastitis consumed one fewer kind, on average.

This study adds weight to the evidence that fermented foods offer a cheap means of reducing the odds of developing mastitis. The question, of course, is how they do so. Various mechanisms have been suggested. For example, some studies propose that lactic acid bacteria increase IgA antibodies and transform growth factor b2 in the milk in the breast, which in turn makes it harder for bacteria to attach to the mammary epithelium [3]. But, for the time being, to know the extent to which drinking kefir helps to ward off a desperately uncomfortable condition, compared with everything else that a mother can do, is valuable.