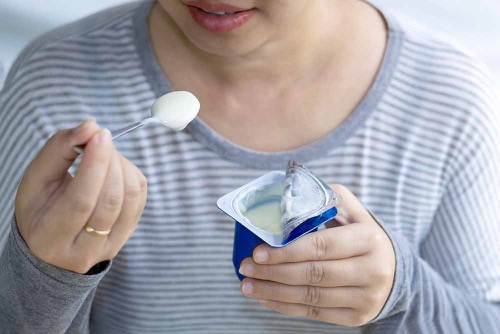 The ability to digest lactose is essential for very young humans, for whom the sugar provides approximately one-third of their daily calories. But upon weaning and growing up, to varying extents, human bodies become less proficient at this task. For many people, the change is so evident that they are diagnosed as lactose intolerant, and, as a result, cut dairy completely out of their diets in an effort to avert unpleasant symptoms. Yet the medical consensus advises against this [1]. Several strategies to manage the symptoms of lactose intolerance and malabsorption are instead proposed: careful dietary management, supplementing the missing lactase enzyme, and, most recently, consuming pre-biotics.

The symptoms of lactose intolerance arise because, in the absence of the enzyme lactase, the sugar hangs around in the gut where it alters the osmotic forces. Gut bacteria are left to ferment lactose, leading to the rapid generation of gases. The reason that some people do not produce lactase is genetic. Most people with European ancestry who can digest lactose owe this ability to a single nucleotide mutation known as “T-13910,” which is situated in a “control” region of the genome (specifically, a transcription factor), upstream of the lactase gene. A few other mutations are associated with lactase persistence into adulthood, as detailed in a previous issue of SPLASH![2].

Managing lactose intolerance is often difficult because it is misdiagnosed. Self-diagnosis is frequently misguided. One review of 26 studies reported that during testing, both people whose bodies have no trouble absorbing lactose and those whose bodies struggle to digest it frequently report symptoms [3]. Bloating, bellyache and so forth simply have various possible causes, yet lactose intolerance is often assumed because it is a well-known medical term. The standard diagnostic test measures changes in the concentration of hydrogen gas in the breath after consuming a lactose solution. High readings imply that gut bacteria are doing the lactose digestion rather than lactase produced by one’s own body. The hydrogen breath test is also used to find out if strategies to manage lactose intolerance are effective.

The most obvious way to manage lactose intolerance or malabsorption is to watch what you eat. Even completely intolerant individuals tend to be unaffected by small amounts of lactose in the region of 12–15 grams of lactose per day. Indeed, some dairy products, such as yogurt, are especially well tolerated by lactose-intolerant individuals because yogurt passes more slowly through the digestive system than does milk, and because the bacteria in live yogurt start to break down lactose inside the gut before resident gut bacteria get the chance [4]. Eating yogurt, or drinking fermented milk beverages such as kefir, or leben, as opposed to other kinds of dairy, therefore enables lactose-intolerant people to get more of the considerable health-promoting benefits of dairy, such as calcium that strengthens the bones, and better protection against digestive problems and cardiovascular diseases [5,6]. In particular, dairy foods that contain bacteria that produce beta-D-galactosidase are understood to be especially calming of the symptoms of lactose intolerance [2].

An alternative to avoiding dairy is to find non-dairy substitutes that contain the nutrients and minerals otherwise lacking in one’s diet. In recent years, many products have appeared on supermarket shelves, claiming to be fortified with proteins, calcium, and vitamins such as A, D, and B12. But typically there is an important unknown in switching one’s diet to these products: that they contain particular components does not automatically imply that the components are easily available to the body for absorption. Whereas the “Digestible Indispensable Amino Acid Score” of cow’s milk protein is extremely high—meaning that it contains very high-quality and bioavailable proteins—the protein bioavailability of most fortified plant-based beverages is unknown [2]. The same goes for the vitamins and minerals that are added to these products. One study of more than 5,000 Canadian children found that children who consumed plant-derived substitutes for dairy, such as soy and almond milk, were on average 0.4 cm shorter in height than those who drank milk [7].

Another strategy for managing lactose intolerance while seeking to avoid the downsides of low dairy consumption is to deliver lactase to one’s intestines in gel, capsule, or tablet form, so that the enzyme survives the journey through the acidic environment of the stomach. To date the results of this approach have been encouraging yet patchy—one study analyzing shifts in the hydrogen breath scores of lactase-deficient people given two lactase tablets per day reported significant reductions in breath hydrogen among 18% of participants but no change in the rest [2].

Then there are pre-biotics (foods that induce the growth of “good” gut bacteria). The Food and Drug Administration in the United States recently approved galacto-oligosaccharide for the management of lactose intolerance. This is a prebiotic that has been demonstrated to improve hydrogen breath test scores in randomized double-blind trials. After 30 days of ingesting galacto-oligosaccharide, participants in one of these trials were six times more likely than the participants who received a placebo to report experiencing no problems tolerating lactose after their ate dairy foods [8].

These innovations, and the deepening understanding of contributors to nutrient bioavailability, mean that options for reaping the health benefits of dairy consumption are increasing for lactose-intolerant people. In the day-to-day, it would be far easier, if food labeling were better standardized, to enable consumers to straightforwardly assess the lactose content of different products. Scientists are calling on governments to introduce legislation that mandates this [2]. Consumers would benefit if they did.

4. Petherick, A. Dairy for the Lactose Intolerant. SPLASH! November 2014.