Towards Individualized Genomes for Dairy Cows 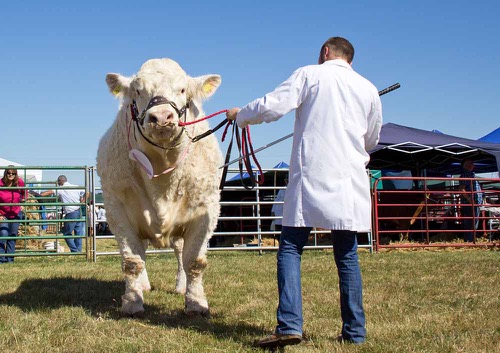 International cooperation between scientists has really taken off in genomic sciences, and now, in a program that has grown out of dairy genetic research, one thousand bulls are set to be immortalized by having their DNA sequenced. The so-called 1000 Bulls Genome Project is an international collaboration between scientists in Europe, USA, and Australia. The project began in 2010, when scientists were looking for a way to share the huge cost of sequencing many entire genomes. The result was the 1000 Bulls Genome Project, which spreads the costs and shares the resources to help geneticists apply their collective knowledge of cattle to improve the productivity of cattle herds.

Why are dairy scientists so interested in generating so much information about bulls? After all, it is surely the cows that are important for milk production. Well, ever since artificial insemination became the method of choice for breeding dairy cattle, a number of national programs were established to select the best bulls. The semen from these bulls is then sold to farmers who are developing and improving their herds. Through these programs, one bull may give rise to many thousands of daughters. Milk production of many of the daughters is then tested on a regular basis and the information sent to a central analysis centre to calculate the genetic value of the bull. Farmers use this information to select the bulls that they want for their breeding programs. So bulls have become the center of selective breeding practices, and over time, farmers have been able to increase the returns from their herds by using the best bulls.

The potential for accelerating the rate of improvement was given an enormous boost with the completion of the bovine genome sequence, which was officially released in 2009. Although this was a reference sequence derived from a single animal, the project spawned a huge number for related research projects, and resulted in an enormous database of information about diversity in cattle. As a result, it became possible to apply the new information to detect and analyze the genetic differences between individual animals that affects their productivity. Dairy scientists were at the forefront of this effort, primarily because they were armed with mountains of data from decades of performance measurements, and the outcomes of breeding programs. With this information already collected, they were able to quickly develop new methods.

The ultimate goal for selective breeding using these DNA based methods, is based on a theoretical model proposed in 2001 by Meuwissen et al[1]. The model outlined a framework to develop a system for what is now referred to as genomic selection. The process divides the entire genome into intervals that can be compared between bulls to accurately predict how much milk their daughters will produce, as well as the milk quality. Because of the bovine genome sequencing project and related studies, the potential to develop this approach to selective breeding has rapidly become a reality. The major question being asked by scientists became: which genomic markers are the best ones to use to define the intervals? The question has generated a great flourish of activity in recent years in an attempt to define and test the model against sets of markers, and to develop accurate predictions that can be applied for herd improvement[2-5].

So, why do we need the genomes of one thousand bulls to be completely sequenced? Even though the data supported the original models and molecular breeding values have now been calculated for dairy programs across the world. However, scientists soon discovered that within a few generations, or for distantly related animals, the capacity to predict the productivity of the cows fell quickly. Not to be deterred, the scientists have regrouped. They reasoned that the best strategy is to use markers that are found in genes that control the most important physiological functions that drive milk production. The search is now on to identify just these markers, but it is not such a simple task, and requires a lot more detailed sequence data, hence the 1000 bulls project. Choosing one thousand bulls meant that the most important gene sequences will be found, and their precise location in the bovine genome will be known. The international consortium for the 1000 bulls project reported its first outcomes (using 234 bulls) in a recent publication [6]. The study reports the first success in extracting detailed information from the sequencing efforts, and confirmed the identity of over 23 million sites to explore – including significant mutations in genes that affect milk fat content. In addition, the scientists used a very clever technique called imputation [7-9]. Imputation allows them to fill in the unknown sequence information between two sites in the genome of an individual cow based on the relationship of the animal to one of the 1000 bulls. In this way, the value of the 1000 bulls project is amplified enormously.

The exciting news is that more recent reports have indicated that many more than 1000 bulls have been sequenced. The project has gained momentum and will become a major international resource for selective breeding programs for many decades into the future.

Very soon, individual dairy cows will have their genome sequence recorded in an ever-growing international dairy cattle database. In the future, cows may even have their individual DNA sequence recorded on their ear tag or in a microchip attached to their body. Farmers will use this information to improve the health and productivity of their cows.