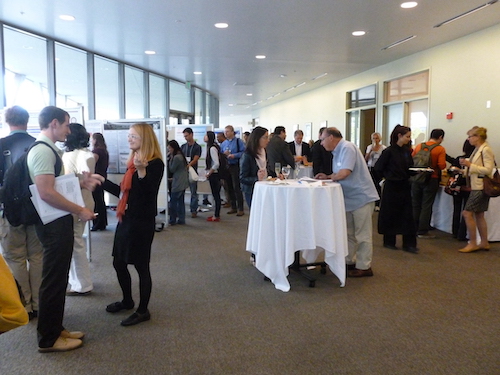 The International Milk Genomics Consortium held its 10th annual conference on Human Health and Milk Genomics on October 1-3, 2013, at the University of California, Davis. The meeting included 29 talks, two panel discussions, a poster session, and a dinner. In case you missed it, here are the top ten moments.

Number 10: Dave Mills highlighted the potential for milk-based translational opportunities centered on developing a healthy microbiome. Specifically, in a crossover study with formula-fed and breastfed infants, his group showed that the beneficial gut bacteria Bifidobacterium infantis can only colonize well and persist in the presence of milk.

Number 9: Riveting panel discussions expounded upon daily presentations and future research applications of milk. Bruce German noted that modern cars have over 25 diagnostics running at all times monitoring the wellness of the vehicle, but humans have no similar external around-the-clock health gauge. The future of medicine will include non-invasive diagnostics, one of which may utilize compounds found in milk.

Number 8: Dining and musical festivities at the Old Sugar Mill reminded us that scientists may often be serious during the day, but we do like to let loose in good company. Exquisite cuisine, conga lines, and the Johan shuffle, as Bruce German kindly nicknamed it, were the highlights of this wonderful evening.

Number 7: Julie Sharp presented exciting findings of two newly discovered proteins exclusively appearing in monotreme lactation. These proteins are shown to have anti-bacterial properties, which likely evolved because the milk consumption environment of monotremes is not very sterile.

Number 6: The conference embraced social media to share the exciting research of the presenters with the public and fellow researchers. Highlights of Twitter postings by participants can be seen here.

Number 5: Vengama Naidu Modepalli and Sanjana Kuruppath both investigate lactation in the tammar wallaby to learn about developmental advantages of marsupials, which help to increase their chances of survival despite early-gestation birth. Modepalli and Kuruppath found, respectively, wallaby milk supplementation to be effective for assisting the development of lung tissues and stomach tissues in two separate mouse models.

Number 4: Katie Hinde approaches milk through a specific evolutionary lens by investigating the influence of infant gender on the mother’s milk composition. In a large-scale study, she found cows with daughters produce significantly more milk after their first parity. If optimized through the use of sex-selected semen, this could have vast implications for the dairy industry.

Number 3: Carlito Lebrilla shared some of his numerous contributions to glycomics that began fifteen years ago on a homebuilt FT-ICR mass spectrometer. His group has developed methods to quantify and classify the oligosaccharides in a vast number and type of samples. These methods can resolve molecular details like secretor status, species differences in milk, or even serve to phenotype gut microbiomes based on collective saccharide cleaving enzymes.

Number 2: Jeff Gordon delighted us with an outstanding body of research that highlighted the benefit of bovine milk oligosaccharides in the development of a healthy gut microbiome and their potential in food therapeutics for malnourished Malawi children.

Number 1: An increase in collaboration has been one of the biggest accomplishments over the ten years of the IMGC. Depicted as a web of connections, the IMGC began with a brave few and has now expanded into a network of informative collaborations and shared research objectives. Collaborations among IMGC scientists have increased 25-fold! Publications have increased by 1100%! Together, we have expanded the fields of milk biology, agriculture, and human health.