To Secrete or Not to Secrete 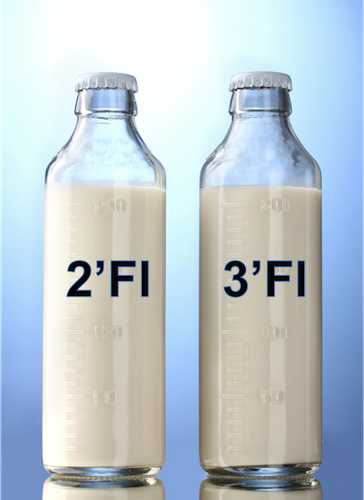 On a cruise ship with a Norovirus outbreak, the chance of becoming infected is largely determined by a single gene: FUT2. Likewise, a mother’s “secretor status”—whether or not she secretes certain protective sugars in milk—is determined by this same gene.

In 2004, Dr. Ardythe Morrow and others made the important discovery that breastfed infants of mothers who produced a certain milk sugar were protected against diarrhea1. (For those who must know, it is 2′-FL, a specific 2-linked fucosyloligosaccharide.) Why don’t all moms produce this sugar? It comes back to that gene, FUT2.

Moms whose milk-making cells turn “on” the FUT2 gene produce a different set of milk sugars that are more protective than those produced in the absence of a functioning FUT2 gene. Moms with a functional FUT2 gene are called “secretors”. “Nonsecretors” have a disabling mutation in the FUT2 (α-1,2-fucosyltransferase) gene and therefore produce sugars with different linkages in their milk.

Perhaps a simpler way to visualize these differing linkages is to use Stick People Chemistry. The difference in sugar structures created by a nonsecretor or secretor is like attaching a Shoe to the left hand or the left foot of a Stick Man. Even though the Stick Man and the Shoe are individually the same in both cases, their ability to function as a whole is different depending on whether the Shoe is on Stick Man’s hand or foot.

Why is the milk of secretors more protective?

All moms produce milk oligosaccharides (sugars). These sugars are not there to feed the infant, despite the fact they are the third most abundant component in milk. Milk oligosaccharides have at least two key functions. The first is to feed beneficial bacteria in the infant’s gut. Some milk sugars selectively feed beneficial bacteria because only these bacteria can sever the link between the sugars to consume it. In our Stick People Chemistry analogy, while some bacteria can remove the Shoe from the Foot, even fewer can remove the Shoe from the Hand.

The second superpower of human milk oligosaccharides (sugars) is to sequester unfavorable bacteria. This sounds complicated, but actually the sugars act as a simple decoy. Cells along our intestines produce a variety of sugars that stick out like tree branches. Bacteria attach to these sugars, enabling them to hang out in the intestines like monkeys in a tree. Some of the sugars in milk, like the 2’FL, are made to mimic these intestinal cell sugars so that the bacteria bind instead to the milk sugars and get flushed out into the baby’s diaper. If a monkey grabs a decoy tree branch that is not connected to a tree, the monkey will fall to the ground.

So why is secretor milk more protective? While it is not known with certainty, the milk sugars from secretor milk are almost certainly better at either feeding beneficial bacteria or binding/flushing bad bacteria.

Premature babies (“preemies”) could certainly benefit from some extra secretor-milk-like protection. Preemies are infants born too soon, before the end of gestation, i.e., before 37 weeks of pregnancy. Many preemies survive birth but face a multiplicity of health complications and prolonged stays in a neonatal intensive care unit (NICU). They are vulnerable to gastrointestinal diseases and infections—in particular, necrotizing enterocolitis (NEC)—due to the delayed establishment of protective intestinal microbiota. Secretor phenotype influences these risks. In a cohort of preemies born at less than 32 weeks gestation, 15% of preemies with low secretor phenotype died, compared with only 2% of those with high secretor phenotype2.

While exclusive breastfeeding provides the ideal nutrition for infants, the optimum for preemies is less clear. Premature milk is not nutritionally complete, nor does it recover in the postpartum period. Perhaps mammary gland development is prematurely halted with the baby’s birth. From an evolutionary perspective, young preemies did not survive, so there would have been no selective pressure for early maturation of mammary glands. Therefore, breast milk needs to be supplemented, particularly for those whose neonates were born at less than 32 weeks gestation.

Human milk contains a few hundred different types of oligosaccharides (sugars), the most of any mammal. Does the mom of a preemie produce all of these sugars? In a recent paper from the Journal of Proteome Research, De Leoz and colleagues present the first comprehensive profile of the milk oligosaccharides in milk from women delivering preterm3. They studied variation in the sugars over time and between individuals as well as certain chemical characteristics, such as fucosylation and sialylation, which are important in the prevention of disease.

The results of this study by De Leoz et al. suggest that the composition of sugars in preterm milk is not consistent (has a higher degree of variability) compared to term milk. The milk from three subjects did not even obey the law of “milk secretor status”: their milk sometimes contained the fucosylated milk sugars and sometimes did not. Given the postulated importance of these sugars in pathogen binding, their fluctuation in mothers’ milk may further compromise the gut health of their premature offspring.

A pool of milk from many donor moms is one possible solution. Donor milk from full term secretor moms is enriched with protective milk oligosaccharides. Fortification of mom’s milk or formula with these protective sugars may be especially beneficial for nonsecretor infants. In Breastfeeding Medicine, Stellwagen et al. propose something low tech: pool milk from the birth mom’s separate pumping sessions4. While they suggest this method to remedy known inconsistencies in macronutrient content, it may help the problem with milk sugar variability as well.

Life is not all bad for nonsecretors