A Time Before Nipples 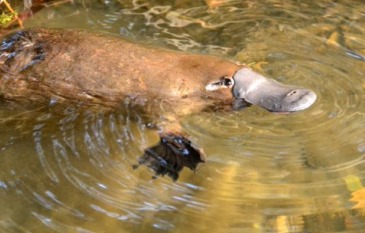 What was milk like long ago in evolutionary history? In the absence of a time machine, the next best way to answer this question is to take what is known about the diversity of living mammals and work backwards using deductive logic, just like Sherlock Holmes. Recently, progress in this area has received a major boost from two papers about the different sugars found in monotreme milk—monotremes being the wackiest and most ancestral-like of the classes of mammals, with membership so exclusive it is limited to only two kinds of creature, the platypus and the echidna.

These two recent papers investigate the mid-sized sugar molecules, called oligosaccharides, that occur in platypus [1] and echidna [2] milk, respectively. The chemical structures of these oligosaccharides would have likely been innocuous details of milk evolution if it weren’t for one thing. In both the platypus and the echidna oligosaccharides, a very unusual structure was observed: one that goes by the tag line ‘4-O–acetylation’, meaning that an oxygen molecule in a particular position is attached to acetyl group.

Why would this matter? On the face of things, it didn’t make biological sense. Scientists consider one of the main roles of the oligosaccharides in milk to be acting as a foodstuff for certain species of bacteria in order for these bacteria to become more common in the infant gut, and thus outcompete pathogenic species. At least, that is what happens in humans. But bacteria cannot chomp through oligosaccharides with 4-O–acetylation. Which sets up the question of why monotremes (and, most likely, also ancestral mammals) would bother to devote resources to making such strange chemical arrangements. At this point in the puzzle, it helps to think about nipples—in fact, eggs and nipples.

One of the things that make monotremes unique among modern mammals is that they lay eggs. Their eggs are not hard on the outside like chickens’ eggs, but have shells composed of a material rather like parchment, leaving the developing embryo inside prone to dehydration. Creatures called synapsids (the ancestors of mammals) also laid eggs of this nature, and female synapsids are thought to have secreted a kind of not-yet-evolved milk from glands in their skin, to stop their eggs from drying out [3]. Likely, their permeable eggs would have taken up nutrients like calcium from these secretions.

As in synapsids, monotreme milk oozes out from glands and runs all over the skin because platypuses and echidnas do not have nipples. No one really knows when in evolution the nipple came about, but nipples certainly evolved after milk. In this sense, nipples matter because—rather like drinking beer from a bottle, as opposed to an open glass prevents a drink from being spiked—nipples keep milk away from all the stuff in the environment that might pollute or metabolize it. Without nipples for suckling, newly hatched monotremes drink milk in a way that is more akin to licking a nightclub floor—they lap or vaccum up what has been secreted on the warm, exceedingly hairy, probably sweaty, skin of their mother’s pouch. (Echidnas have proper pouches, while platypuses wrap their beaver-like tails under their abdomens to form temporary pouches.)

So, the cost-benefit analysis of producing oligosaccharides with structures that bacteria cannot eat stacks up differently for monotremes than it does for mammals with nipples. If monotreme mothers were to make milk that bacteria thrived upon, bacteria would run amok in their pouches, probably threatening the survival of their young.

Curiously, there is a strong hint from an old piece of research that indicates that young monotremes have a particular enzyme capable of breaking down oligosaccharides with 4-O–acetylation, thus potentially enabling them to use these sugars for energy. Many years ago, a researcher called Michael Messer found this enzyme in a slurry of echidna gut cells. While his finding needs backing up with more modern laboratory equipment, if supported, it suggests a new way of viewing the oligosaccharides in milk. In modern humans, oligosaccharides may be mainly there to feed good bacteria as opposed to infants, but the signs are that their historical role in the mammal lineage is the other way round. The young of early mammals probably metabolized oligosaccharides, while the bacteria in their environment could not.