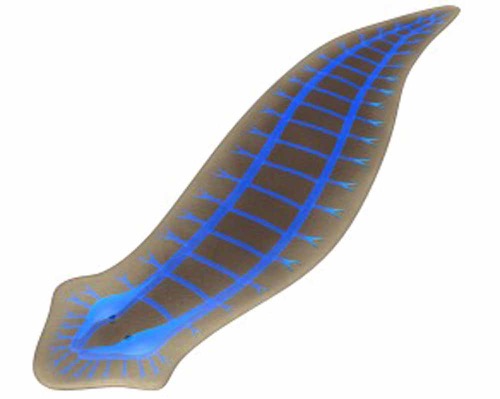 What do breast milk, regenerating flatworms, and infected mice have in common? That might sound like a particularly cryptic riddle, but the answer may improve our understanding of the beneficial properties of breast milk and could potentially lead to new therapies for many diseases.

Serhan’s previous work has helped show that the resolution of inflammation is an active process, mediated by molecules dubbed ‘specialized pro-resolving mediators’ or SPMs [2,3,4,5]. “This is a pretty novel concept,” says Serhan. SPMs are small molecules made at the site of an infection that promote the clearance of bacteria and cellular debris from the infection site and stimulate the resolution of the inflammatory response.

But that may not be all they do. In a recent study, Serhan and his team showed that in pigs with periodontitis—a gum infection that destroys the bone supporting teeth—using pro-resolving molecules to control inflammation actually allowed the tissue to regenerate [6]. Serhan recounts that the team “started to think hard about how all these specific signals in the resolution response can actually stimulate tissue regeneration.”

In the new PNAS study, Serhan and his team isolated chemical signals from self-limited bacterial infections in mice, and then examined whether these could promote tissue regeneration. They looked at the effects of these signals on flatworms called planaria, which have an amazing ability to regrow body parts that have been injured or cut off [7]. According to Serhan, “They’re an ideal model for looking at tissue regeneration. You can cut those planaria in half, and then they’ll regenerate on their own, and we looked at whether these specific signals would regulate this.”

Jesmond Dalli, a biochemical pharmacologist at Brigham and Women’s Hospital and the first author on the PNAS study, estimates that “if these signals are as important as we think they are, then they have to be conserved in evolution.”

“So, we started with a mouse, and then we went to planaria, to see whether these processes were active there,” says Dalli. Looking at human milk, “gave us a way to look at regeneration in humans,” he says. “We can’t really chop someone’s fingers off and look at what’s happening, so these regenerative processes that are happening in infants that are developing, that was our validation.”

The team had good reason to think that these signals might be present in milk. Human breast milk has been previously shown to contain chemicals and nutrients that play a role in infant development and immunity [8]. A recent study also found high concentrations of certain types of SPMs in human breast milk [9]. Moreover, many SPMs, including SCI and SCII, are synthesized from fatty acid precursors such as docosahexaenoic acid, or DHA. Serhan says that “Another reason we were interested in milk was because we know that in mother’s milk, there’s a high concentration of DHA.” DHA from breast milk is thought to play a role in early neural development, and is added to some infant formulas, although, according to the FDA, it is still unclear whether DHA in infant formula is beneficial [10].

Serhan is currently working on determining therapeutic uses for SPMs. The compounds found in the PNAS paper and in another more recent study by Serhan’s team enhance the killing and clearance of E. coli [11]. He explains, “They’re actually enhancing the anti-microbial action of the innate immune system.” The ability of SPMs to control inflammation could prove useful against the many diseases where unresolved inflammation may play a role. In fact, he says, “There are a couple of these molecules and their analogs that are already in clinical trials for things like periodontal disease, and eye inflammation.” What makes SPMs particularly handy is that unlike many common anti-inflammatory molecules, they do not suppress the overall immune system, so they wouldn’t disrupt the body’s ability to respond to other infections.

There’s also the question of what natural role these molecules might be playing in human breast milk. We don’t have specific answers yet, but Serhan thinks we can speculate. From his work, “what becomes even more exciting is the possibility that these agents are present in milk to enable growth and tissue development,” he says. Given that breast milk carries many immune mediators, these molecules could also be important for the infant’s immune development. Serhan says, “Those are really exciting possibilities, and I guess more reason why breast milk is very important.”