The Promise and Challenges of Producing Human Milk in the Lab 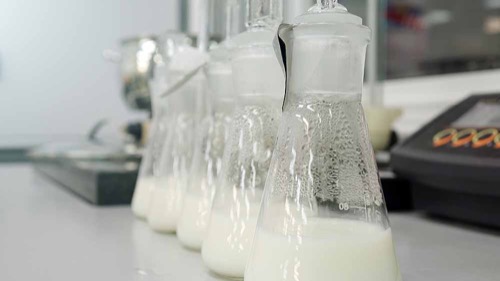 Breastfeeding is known to be both nutritious and beneficial to the health of infants, including improving their immunity and helping to protect them from infections. However, not everyone is able to breastfeed, and many mothers have to rely on donor milk or formula instead.

Current formula is generally derived from cow’s milk and still lacks many important human milk components, including certain sugars, fats, and immune cells. “The aspiration for formula has always been to make it closer to human milk,” says Monique Rijnkels, Research Associate Professor at Texas A&M University. “And cow’s milk is not human milk and there’s differences with it,” she says.

Recently, multiple startup companies—including Biomilq of North Carolina and TurtleTree Labs of Singapore—have been attempting to produce human milk from lab-grown cells in order to better replicate breast milk. The specific approaches of the companies vary, and they’re all still at an early stage.

Biomilq grew mammary cells in a bioreactor—a vessel for growing cells under controlled conditions—and successfully produced two major milk components, lactose and casein (1). At the moment, the mammary cells are derived from commercially available cell lines. “The Biomilq people are currently using just off-the-shelf mammary epithelial cells,” says Rijnkels. “They’re interested in pursuing making their own cell line or things like that eventually, but I think they just want to do a proof-of-concept with what they have right now,” she says.

TurtleTree Labs uses a different approach, extracting stem cells from donor human milk and differentiating them into mammary cells that can produce human milk (2). Other startups are using food science approaches that don’t require mammary cells at all, such as New York-based Helaina’s yeast-centric approach (3).

Details about these startups’ methods are scarce, as each uses proprietary technology in its efforts to produce human milk. Regardless of the method used, they’re all far from having a commercially available product that’s received regulatory approval. They are also likely to face many challenges in getting closer to replicating human milk, or even formula, which is manufactured to be consistent in composition and is closely monitored for quality. However, these cell-based approaches may eventually present an intriguing alternative to formula.

“If this enables us to produce a formula or some kind of baby food milk that is closer to human milk compared to what’s on the market, that’s probably good,” says Rijnkels. “I would like to see the price proposition that’s related to that, but if this is a cost-effective proposition then there might be a niche for it,” she says. “It’s not going to take over the formula market in the next couple of years, but if they pull it off there will be a market for it,” she says.

So far, none of these companies is close to reproducing all the constituents of human milk. “I think these companies also admit that they’re never going to totally replace breast milk, because it’s just virtually impossible,” says Rijnkels. “It’s not like these cells need to make this one particular protein or a small group of proteins,” she says. “It’s very complex matter that is made and that’s why it’s so fascinating,” says Rijnkels.

“There’s so much that is sourced directly from the mother that’s not produced in the cells, and we’re not even talking about whether we’ll ever get the cells to actually produce at the levels that they do in the body,” says Rijnkels. “I’m still somewhat skeptical, but I’m excited that people are trying this, and it will be an advancement for the field if they can actually pull it off by producing in cells at high enough levels something that resembles human milk to a good degree,” she says.

A complex mix of components

There’s still a lot researchers don’t know about the composition of human milk. But it’s clear that it’s a complex mix of ingredients, containing variable levels of immune molecules, proteins, lipids, sugars, hormones, vitamins, and other nutrients and microbes. Many of these components interact in ways that can affect immunity [4-7].

In addition, human milk is customized to the baby. Human milk varies from mother to mother, and its nutritional contents change throughout the day and over the course of weeks to meet a baby’s needs (8). It can also vary based on environmental factors, the mother’s food choices, and exposure to infections. An infection in the mother can lead to her passing on antibodies to that infection in her milk, which can help her newborn fight off infections (9,10).

“It’s all custom made for the baby and that’s one of the advantages of breastfeeding,” says Rijnkels. “If that’s not an option, there needs to be other good options that are as close as we can get,” she says. “Of course, we can also discuss what better support for breastfeeding could add to the picture,” says Rijnkels.

Many breast milk components would not be produced by mammary cells in culture, and lab-produced milk would thus need supplementation. “Milk has a lot of components that are passed through the mammary cells rather than being made in the cells,” says Rijnkels. “So a number of those either would have to be added or won’t be in there,” she says. These include immune components such as immunoglobulins and hormones such as serotonin.

What about the milk components actually produced by mammary cells? “In principle everything that is made in a mammary cell could be made in cell culture, given the right signals,” says Rijnkels. “I’m not quite sure if we’re clear on what the right signals are for all of those ingredients, however, and how efficient the process is going to be; that’s kind of the challenge that I see” she says. The stage of the cells could also matter. Studies on milk-derived mammary epithelial cells from dairy animals showed that lactation stage can significantly affect milk composition (11).

Rijnkels says Biomilq’s ability to get cells to produce lactose and casein is just a start. “It’s a good start if we can make that, but the question is, can we make the other things that are in milk at acceptable levels to the right ratios,” she says.

While researchers have been studying the major milk protein genes for a long time, they still have a lot to learn about other components, such as lipids. “We’re learning more about how the lipids are formed and in a large part that can still be a challenge in the culture systems,” says Rijnkels. Previous work has shown that production of milk lipids, and especially their secretion in complex structures known as milk fat globules, varies based on the body’s metabolic and hormone signals, lactation stage, and nutrition (12-16).

The lab-grown cells will also need to produce all the milk ingredients at sufficiently high levels. It’s unclear whether mammary cells in culture would include sufficient quantities of vitamins E and K, minerals such as iodine and iron, and omega-3 fatty acids. Current infant formulas are generally fortified with such components.

“A mammary cell in the body will turn out milk ingredients at such high levels, and I have yet to see a cell in culture do that,” says Rijnkels. “That’s kind of where my fascination is with the systems they are setting up and maybe it doesn’t need to be at those levels because they can concentrate things a little bit afterwards,” she says.

Growing mammary cells in a lab isn’t a novel idea. Researchers such as Rijnkels have long been doing this in order to study such cells. So far, they’ve learned a little bit about how complex the process of lactation is, and why it might be hard to replicate outside the body.

“I’m totally fascinated, because I’m a mammary gland biologist and I know the challenges of trying to replicate what the mammary gland does outside of the body,” says Rijnkels. She points out that the companies appear to use various proprietary bioreactor systems quite different from the cell culture systems researchers use in the labs. “If with their culture systems they can replicate that closer than most of the cell culture systems that we have right now, that’s fantastic, and I want to know how they do it,” she says.

How the cells are cultured can make a big difference. “They definitely like to be in the right environments having the right interactions with the matrix and with each other,” says Rijnkels. “In a lab culture, it would be easy if we could just place them on a plastic dish and have them do what a mammary gland epithelial cell does in the body, but that’s just not happening,” she says.

Researchers have tried to replicate the signals that the cells receive within the body. “People have done a lot of work and established that they need some kind of matrix and they need the right signals,” says Rijnkels. “There are different signals that will signal the making and the secreting of milk, and we know most of that, but I’m pretty sure we don’t know everything about it,” she says.

Lactation is also a metabolically demanding activity for the cells. “One of the challenges of keeping lactation persistence is to keep those cells healthy and alive,” says Rijnkels. “In a mammary gland in the body, there’s such a demand on those cells for bioactive production that it’s really hard to keep them around for a long time, and they need to renew and there’s processes in the glands to support that,” she says. “So I think that’s going to be a challenge too, to keep the cells healthy and productive,” says Rijnkels.

Researchers could benefit from companies’ successful efforts to produce human milk from lab-grown cells. “We know that there are absolutely challenges in culturing cells and making them work as they work in the actual mammary glands,” says Rijnkels. “People in the field would benefit from the ability to use these companies’ approaches for our research, and I think it will help mammary gland biologists and scientists helping moms that have issues with lactation and studying lactation in the dairy setting as well,” she says. “If this works well, it’s fantastic and I would love to learn more details.”