The Fifteen Lives of Mammary Cells 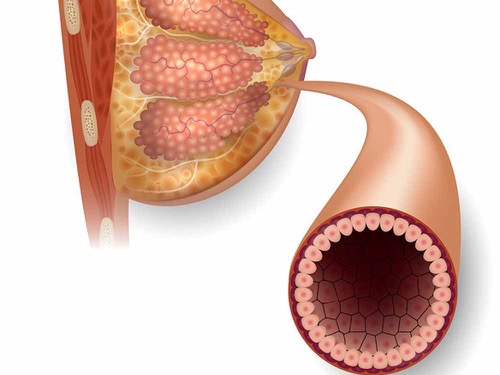 How do mammary cells change and gain the ability to make milk at each birth? Scientists, at present, only have fragmentary information and little detail about the hierarchy of mammary cells contributing to the lactation cycle beginning at each pregnancy. A cellular hierarchy is like a family tree. It shows the relationships between different types of cells i.e., who begat whom. Knowledge of cellular hierarchies in mammary tissue could help answer many difficult questions. Which cells (progenitor cells) give rise to the cells that make milk or cells that form part of the mammary tissue structure supporting lactation? How do mammary epithelial cells cease producing milk after weaning? Which mammary cells develop into breast cancer and why? Recently, a group of investigators produced a massive molecular resource that may help answer these and many other questions relating to mammary tissue function [1]. Importantly, the investigators made the resource available to all scientists to maximize its potential for additional discoveries.

Milk is exquisitely tailored to suit a newborn offspring’s rapid growth and developmental requirements while also protecting it from microbial infections. Thus, milk provides newborn offspring with an enormous head-start in life until they reach the stage when they can feed themselves. The challenge for scientists is to better understand how a mother’s mammary tissue is prepared during pregnancy for lactation after birth, and then how lactation is turned off after weaning of offspring, with the whole lactation cycle beginning again at the next pregnancy. There are also important practical reasons why scientists want to better understand the regulation of mammary tissue functions. This knowledge is crucial for improving the efficiency of milk production in dairy cows, and it may also lead to new ways to treat human breast cancer.

Mammary Tissue is Unlike Other Tissues

Mammary tissue is very different from other tissues, just ask any mother. The mammary tissue of an adult female undergoes amazing cellular changes during pregnancy, lactation, and weaning. This cycle of cellular changes means that mammary tissue has unusually rapid cell turnover (high rates of cell death and new cells formed), which is repeated at each pregnancy. Many of these cellular changes are triggered by hormonal changes during pregnancy and after birth. The highly dynamic cellular state in mammary tissue during the lactation cycle contrasts with most other tissues, like liver, brain, and muscle, which simply focus on the maintenance of cells contributing to a fully developed and relatively constant physiological function. Also, unlike most other tissues, mammary tissue develops its primary function, the potential for lactation, after puberty. This timing is relatively late in the developmental programs that underpin the physiology of most tissues. Somewhat mysteriously, a mother’s mammary tissue becomes more efficient at producing milk after the first pregnancy and lactation cycle [2, 3]. How does this occur?

Some cell markers identified progenitor cells of mammary epithelial cells [5, 8]. The role of a progenitor cell is to provide cell replacements in a tissue and thereby maintain or change a tissue’s physiological functions. A progenitor cell is a little like a stem cell, but unlike a stem cell, it does not indefinitely replace itself. It can also only generate a limited range of other cell types. A mammary progenitor cell in the right circumstances can change (differentiate) into a specific subtype of mammary epithelial cell. Cell markers identifying progenitor cells can also be used by scientists to map cell hierarchies, which are fundamental for understanding the cellular changes in the lactation cycle and the origins of breast cancer cells [5-7]. However, scientific progress in this area of research over the last decade became slower and more difficult. There could be additional subtypes of cells lurking unidentified in mammary tissue because scientists do not have simple and specific markers for these cells. It’s hard to find something if you don’t know it exists! There must be a better way.

A Cellular Fingerprint of Gene Activities

Recently, a group of investigators based at the University of Cambridge and the nearby Wellcome Sanger Institute in the United Kingdom took a very different approach to characterize the different types of cells in mammary tissue during the mouse lactation cycle [1]. The investigators exploited the mouse model of lactation, as it has become very useful for deciphering the complexities of cell hierarchies and the identification of progenitor cells in other tissues. Instead of relying on cell markers for cell-type identification, the investigators inferred cell types based on the activities of thousands of genes within each of about 23,000 mammary epithelial cells isolated from mammary tissue. The technology used by the investigators strikingly picked up pace about three years ago when the ability to efficiently isolate individual cells was combined with very high throughput measurement of gene activities from individual cells. Gene activity is the ability of each gene to produce a messenger RNA molecule (mRNA), which carries a unique blueprint used by the cell to synthesize a specific protein. Different cell types produce different quantities of common mRNAs as well as some unique mRNAs. Thus, the profile of thousands of mRNAs within a cell acts like a fingerprint that provides a very accurate means of identifying similar or different cell types. The mammary tissue samples were collected by the investigators before first pregnancy, at mid-pregnancy, at peak lactation, and after weaning. The investigators isolated individual epithelial cells from each tissue sample and then determined their mRNA profiles.

Bach and colleagues produced a huge amount of data using the new single-cell RNA sequencing technology to generate mRNA profiles for tens of thousands of mammary cells [1]. The investigators’ analysis of the data was very informative. They identified 15 “clusters” of epithelial cells involved in the lactation cycle using the mRNA profiles. The “clusters” are equivalent to different functional types of epithelial cells. Bach and colleagues noted that few of the “clusters” corresponded with a unique cell marker [1]. This conclusion highlighted the coarse nature of previous studies using cell markers and the much greater cell-resolving power used in the current analysis. Bach and colleagues concluded that combinations of some of the “clusters” identified epithelial cells with well-known functions, thereby providing strong proof that the research strategy had worked well. The investigators also inferred hierarchical relationships between different epithelial cell “clusters” across the lactation cycle i.e., they inferred which cells were progenitors of other cell types. This result was a particularly useful discovery.

Bach and colleagues’ major conclusion was that instead of the presence of discrete types of epithelial cells in mammary tissue, their data suggested a continuous spectrum of mammary epithelial cells at varying stages of development during the lactation cycle [1]. They also concluded that a single progenitor cell type was responsible for the generation of the epithelial cells lining mammary tissue ducts (lumina).

Epidemiologists report that breast cancer is a leading cause of cancer deaths in women especially in many Western countries [10]. It is not a single disease, as it is heterogeneous, and this challenges the effectiveness of current therapies [11]. Many scientists suggest that breast cancer occurs when the regulatory system for controlling normal mammary epithelial cell development, growth, and hormone responsiveness goes askew [5, 9, 12]. Thus, mammary tissue function and breast cancer development are intimately intertwined.

Bach and colleagues also demonstrated that the first lactation cycle caused lasting changes in the mRNA profiles of epithelial cells in the mammary lumina [1]. The investigators stated that this result was “especially interesting” as pregnancy and breastfeeding have protective effects against breast cancer [13, 14], and the mammary luminal epithelial cells were likely derived from a single type of epithelial progenitor cell. Bach and colleagues concluded that “luminal progenitor cells maintain a memory of gestation and lactation.” They implied that a better understanding of the molecular basis of this progenitor cell “memory” could be very informative for the discovery of new therapies for the treatment of breast cancer [1]. The “memory” also may be an explanation for why more milk is produced after the first birth and first lactation cycle in most mammals. Importantly, the powerful single-cell mRNA profiling technique used by Bach and colleagues [1] is also being used by other scientists to directly unravel cell hierarchies associated with the origins of human breast cancer [9, 12]. In the future, perhaps these large-scale studies will intersect and generate additional ideas that ultimately lead to better outcomes for women with breast cancer.