The Environmental and Nutritional Impact of Removing Dairy Cattle 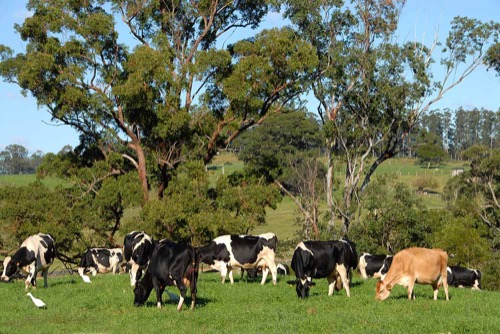 The United States dairy industry is a major contributor to the US food and nutrient supply. Dairy products are a major source of protein, calcium, and many essential vitamins not just in the US but all over the world [1-3]. The US dairy industry also accounts for 16 percent of the greenhouse gas emissions from all of US agriculture, and contributes roughly 1.58 percent of the total US greenhouse gas emissions [4,5].

One suggested approach to reducing greenhouse gas emissions has been to reduce or eliminate animal production in favor of plant production [6,7]. A new study set out to examine the nutritional and environmental impacts associated with removing dairy production [8].

“The project is actually a continuation of some work that we put out in 2017 where we evaluated what would happen if we removed all animals from US agriculture,” says assistant professor Robin White of Virginia Tech. The 2017 study revealed an increase in micronutrient deficiencies despite greater food availability in a simulated system without farmed animals for food production [4]. “This work is a specific follow-up to look individually at the dairy industry, which has some unique trade-offs in terms of provision of human edible nutrients and environmental impact,” says White. Dairy products contain a mix of unique nutrients required by humans, while milk production from dairy cattle has a lower environmental impact than meat production or production of some plant products, such as lettuce [9-11].

White and her colleagues set out to determine the current contributions of dairy products to the nutrient supply in the US. The new study also considered the mechanics of how land use within the agricultural system might adapt to reduced consumption of animal products. Previous studies found that when non-livestock animals move into areas previously used by livestock, there is a significant effect on greenhouse gas emission [12].

The researchers also took into account the effects of different approaches to dairy depopulation. “We have two different types of scenarios, one focusing on the question of practicality, if we are to reduce the size of the dairy industry, how would we go about doing that, and the second question focusing on how we might use agricultural land that would be liberated when we reduce the size of the dairy industry,” says White.

“We have three scenarios or three levels, one of which is kind of the extreme scenario where we actually go through and do a one-time depopulation of all dairy cattle,” says White. “That is effectively a mass slaughter of dairy cows, so that we no longer have them contributing to environmental impact,” she says. “In all likelihood that’s something that would be really socially unacceptable,” says White.

“Our results suggest that depopulation probably is a scenario where we get a big environmental benefit and highlights that there are some trade-offs there,” she says. Under this scenario, greenhouse gas emissions from agriculture declined 7.2% compared with emissions from the current production system, although supplies of several essential nutrients declined as well.

The researchers also considered a second scenario, the current management (export dairy) scenario, where people may stop consuming dairy products, but the dairy industry largely remains unaffected because they sell dairy products for other purposes and use those products as an export instead of selling them to US consumers. “That’s kind of the extreme scenario in terms of if we were only economically motivated,” says White. Greenhouse gas emissions were unchanged in this current management (export dairy) scenario, with a decrease in nutrient supplies compared with current diets or the depopulation scenario.

The researchers also considered a retirement scenario, where dairy animals are retired to pastures. “Then there’s a third scenario that probably reflects what the average consumer would expect to see when we talk about reducing the size of the industry, and that’s a scenario where effectively dairy cattle are just retired out of the milk production sector and animals are allowed to maintain their semi-feral existence on available pastures and such,” says White. She notes that this scenario doesn’t address how one would actually achieve population control for those animals, which is an issue for other feral populations in the US such as feral horses and feral cats. The retirement scenario showed an 11.97% decline in total agricultural greenhouse gas emissions compared with current emissions, likely because of the greatly reduced population of cows sustainable on available pastureland. However, available supplies of all nutrients decreased in this scenario.

The researchers estimate that retiring dairy would translate to a 72.6%, 56.7%, and 53.9% decrease in domestically produced supplies of calcium, vitamin B12, and vitamin D, respectively, relative to the current contributions of dairy to the US agricultural system. “The sheer quantity of nutrients that are contributed to from the dairy industry was pretty staggering,” says White.

The study’s investigation into the impacts of removing dairy cows from US production agriculture suggests that the greenhouse gas changes would be relatively minor, equivalent to 0.7% of the total US emission. The researchers found that removal scenarios that did not reduce micronutrient availability also did not improve greenhouse gas emission relative to the current production system. They suggest that nutrient production and meeting of essential nutrient requirements should be considered when evaluating the impact of removing any animal production system.

“The primary takeaway is that there are tradeoffs within the food production system between the production of high quality human edible nutrients and the environmental impact of the food production system,” says White. “Of the numerous scenarios we evaluated there wasn’t a single one that was better in both of those categories than our current agricultural system,” she says. “The current agricultural system does present some sort of optimum there, and in evaluating different strategies to try and influence some of the negative aspects of that system—the environmental impact being an example—we need to be considering the collateral impacts of those choices on the other aspects of the system,” says White.

In follow-up experiments, White and her colleagues plan to work toward similar assessments at a global scale. Such assessments may help policy makers consider the pros and cons of various scenarios. “From the standpoint of deriving policy, I think that this highlights the importance of looking at the different policy options with as wide a lens as possible,” says White.

Post-script: A note about methane’s role in greenhouse gas emissions

Methane is a potent greenhouse gas that is 25-28 times stronger than CO2 over a 100-year period. However, there is some evidence, including from a recent white paper, that carbon dioxide (CO2) and methane differ in the way they contribute to global warming, particularly depending on the source of methane. Whereas the burning of fossil methane—such as from natural gas—gives rise to CO2 that can remain in the atmosphere for centuries, methane emitted by cows is relatively short-lived and is broken down after 12 years in the atmosphere.