The Early Influence of Breastfeeding on the Infant Immune Response 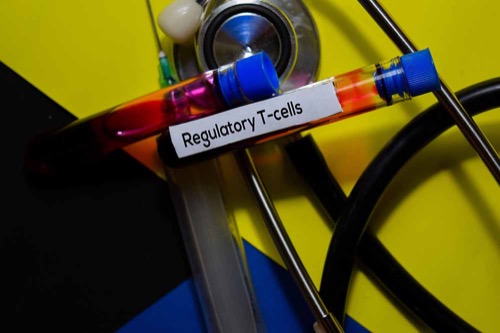 Breastfeeding is known to have several long-term impacts on health and immunity, including a lower incidence of allergy, asthma, diabetes, and multiple sclerosis [1-4]. But researchers still know relatively little about the development of the immune system within the first few weeks of life, and about the effect of breastfeeding on this early immune development [5-9].

“If you think about what babies need to do from the immunological point of view when they’re first born, they need to learn to respond to pathogens, but they also need to learn to tolerate environmental antigens and things that the immune system shouldn’t be reacting to,” says Dr. Gergely Toldi of Birmingham Women’s and Children’s Hospital. In a new study, Toldi and his colleagues investigated the development of the neonatal immune system and how it is affected by breastfeeding [10].

Studying the immune system of newborn babies wasn’t easy. “Working on blood samples taken from babies is always a challenge because of the small quantity of the samples that we can take, but it also provides a lot of interesting information, and with today’s technologies a lot can be done from just tiny amounts of blood,” says Toldi.

Toldi analyzed the development of the immune system between birth and three weeks of age in a cohort of 38 healthy neonates born by Caesarean section (C-section). “We know that labor and delivery induce an inflammatory response both in mom and baby, so this is why we very purposefully chose a cohort of all babies born from Caesarian section to rule that influence out,” he says. “They were all healthy and only sampled for research purposes, so they didn’t have any other sort of medical problems that could have influenced the function of the immune system,” says Toldi. “The first three weeks of life was also very carefully selected because as these babies grow and receive immunizations or acquire infections, these influence the immune response,” he says.

Toldi and his colleagues also explored how breastfeeding influenced neonatal immune responses. “We know from epidemiological studies that those early influences, whether someone receives breast milk or formula milk, can have quite long-lasting consequences during the individual’s lifetime,” says Toldi. “In particular, immune-mediated disorders are known to present with variable prevalence in those who are breastfed compared to those who are formula-fed,” he says.

The researchers compared the immune repertoire and function between breastfed and formula-fed infants, and also investigated the microbiome from neonatal stool samples. “We first wanted to characterize the kinetics and changes of the T cell compartment of the immune system, which is the adaptive arm of the immune system and includes the cells and the networks that learn to recognize pathogens,” says Toldi. “The first step was basically just looking at how these cells evolve in the first three weeks, how the complexity of this cell subset changes, and what different subtypes evolve over time,” he says.

Toldi and his colleagues found that certain immune cells known as T regulatory cells expanded substantially in the ﬁrst three weeks of life. “We found that there is an increase in the population of the T regulatory cells, which is quite a special type of cell responsible for regulating the response from all the other T cells,” says Toldi. “So it’s basically a brake on the immune system and controls inflammation or the immune response when it’s not needed anymore,” he says.

The researchers then investigated how the neonatal immune system responded to maternal cells. “The next step was to see how the baby’s and mother’s immune systems recognize each other because they are not perfectly separated,” says Toldi. “Before birth, there is some cell exchange through the placenta and after birth in a breastfed baby the maternal cells do enter babies’ guts and eventually their circulation through the breast milk,” he says. “It is an interesting question that hasn’t really been studied before, to see how an immune tolerance is maintained towards those maternal antigens that otherwise would be recognized as foreign from the baby immune system’s point of view,” says Toldi.

The researchers found that tolerance of maternal cells was much better in babies who were breastfed. “Physiologically that makes perfect sense, because even if there’s probably not that many maternal immune cells entering a baby’s system in a single feed, over time it adds up to quite a lot of antigen exposure and antigenic load,” says Toldi. “This was an interesting finding that there is this tolerance and it’s stronger in babies who are breastfed,” he says.

Toldi and his colleagues then investigated the mechanisms of these early immune responses. “This is where the T regulatory cells come into the picture again, because in breastfed babies we found almost twice as many T regulatory cells as in non-breastfed babies, and they are actually mechanistically responsible for maintaining this immune tolerance,” says Toldi. “So when we depleted these cells from the immunological experiments that we conducted using moms’ and babies’ cells, then this tolerance did not occur,” he says. “The tolerance is also very specific towards moms’ antigens, because it was not seen when we repeated the experiments with an unrelated, healthy persons’ cells,” says Toldi.

The researchers then analyzed stool samples to look at changes to the microbiome. “By three weeks we did find subtle differences, with specific strains of bacteria called Gemella and Veillonella more abundant in breastfed babies’ stool samples,” says Toldi. “The way this fits in with the immunological findings is that we know that these strains of bacteria produce large amounts of short-chain fatty acids, and so they support the function of the T regulatory cells,” he says. “Whether the increase in these bacteria is a consequence of having higher numbers of T regulatory cells or whether these bacteria actually contribute to that elevation is not quite clear yet, and that’s something we would like to clarify in future studies,” says Toldi.

Toldi is also interested in future studies looking at babies born vaginally, although this will require finding ways to rule out the compounding effects of labor and delivery on the immune response. “From the microbiome point of view, there would definitely be differences in how these babies develop in the first three weeks compared with the C-section-born babies,” he says. “Another interesting question would be to see how long-lasting these changes are and whether these things balance out in later life at some stage,” says Toldi. This would require following up on the cohort and seeing how the children develop. “That would allow us to also explain whether there’s a direct link between these early immune changes and the epidemiological findings that support different incidence of things like autoimmune diseases between breastfed and formula-fed children,” he says.

Toldi’s findings suggest that breastfeeding directly promotes the development of T regulatory cells that suppress immune recognition of maternal cells, and these effects could potentially confer lifelong benefits. The results improve our understanding of how breastfeeding very early in life can influence health and immunity. “What surprised me was that it’s such a well-balanced system and it all kind of fits together very nicely,” says Toldi.