The Daddy of All Cows 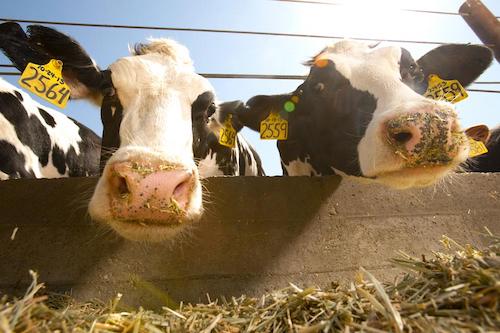 Holstein cattle have become the dominant dairy breed worldwide. These black and white cows have become synonymous with dairy in many countries and they produce billions of liters of milk. This has been facilitated by artificial insemination technology that is the basis for herd replacement and genetic improvement programs around the world. With this in mind, Yue et al. [1] conducted a study to examine how much genetic diversity exists in the male chromosomal lineages of modern cattle.

The genome of cattle consists of 30 pairs of chromosomes. As with other species, two of these chromosomes are sex chromosomes, named X and Y. Males have one Y-chromosome and one X-chromosome, whereas females have two X-chromosomes. This means that all male offspring of one bull inherit an identical Y-chromosome from their sire. So if the male ancestral animals have been few in number, the variation in genes that sit on the Y-chromosome is very limited. Considering that the Y-chromosome contains genes that are major contributors to male fertility [2], it becomes a very important factor for management of dairy herds, and for accessing the gene pool that may contribute to selective breeding.

A study by Yue et al. [3] set out to determine Y-chromosome diversity amongst Holstein cattle. The scientists dug into the records and databases for over 60,000 Holsteins in the USA and over 220,000 Holsteins from international sources. These records include pedigree information that could be used to trace the ancestry of dairy cattle up to recent times.

Yue et al. [3] identified the records of bulls from electronic databases held by the National Association of Animal Breeders (USA) beginning in the 1940s, and then physical records that went back beyond those years. The earliest records relating to the original import of Holstein cattle into the USA about 150 years ago. However, there was a significant change in patterns of sire use when artificial insemination was introduced in the 1960s, so animals born in those years were given special attention as founders of modern cattle. They compared these with the pedigrees available on bulls from over 35 countries going back as far as the 1950s.

Next, the study focused on Y-chromosome DNA data that had been determined for 257 modern-day bulls [1]. The Y-chromosome of cattle is particularly rich in repeated regions of identical or similar DNA sequence, referred to as copy number variants (CNV). The 257 bulls were grouped according to the founder animals that gave rise to their pedigree line. The scientists had data from these animals that measured their reproductive capacity or fertility, which had been previously linked to the Y-chromosome CNV.

The research showed that, out of over 62,000 bulls born in the USA between 1950 and 2013, over 99% were the descendants of only two bulls. In other words, all of the bulls from modern times have only one of two Y-chromosomes. This represents an extreme bottleneck in the male line of Holstein dairy cattle. Why would all these progenies arise from only two bulls? Clearly, farmers want to use the best bulls to breed their herds. It’s their way of increasing the efficiency and economic viability of their enterprise. Following the introduction of artificial insemination and a system to deliver semen across the country, it was possible for farmers to choose the very best, and these animals were from the two bulls that were identified. It’s also possible that bulls were removed from the pool due to genes that caused inherited disorders. Yue et al. [3] speculated that the bottleneck could have contributed to declining fertility rates in dairy cattle, which appears to be correlated with the increase in milk production that has been a primary target of improvement strategies. The limitation in Y-chromosomes amongst Holstein bulls may restrict attempts to reverse a decline in male fertility.

How could the limited number of Y-chromosomes be reversed? The simplest answer would be to look outside the USA for bulls with different founders and alternative Y-chromosomes, then import semen.

Unfortunately, when Yue et al. [3] analyzed the pedigrees from over 220,000 Holstein bulls in the international database, they found the same effect and the same founders. The senior scientist in the study, Dr. Liu, has since developed a different strategy. He has gone back to archived samples of frozen semen and found a bull from a different line to use for breeding [4]. There may be similar archive samples held in repositories around the world. The alternative would be to cross breed using other productive dairy breeds as the source of semen, but the impact of this strategy on herd improvement is likely to be more complex. Modern genomic tools should help to iron out the complexities.