The cow that keeps on giving 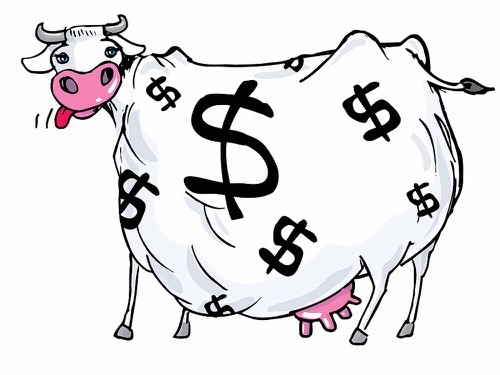 Imagine a dairy cow without a lactational dry period. Most people would say it’s science fiction, but the discovery of bovine mammary stem cells perhaps brings this possibility a little closer to a reality.

A recent review by Capuco et al.1 highlights the roles of bovine mammary stem cells in lactation and their potential to be used by the dairy industry to increase productivity and efficiency.

There are specific periods during a cow’s lifetime when it is not producing milk or not optimally producing milk. Increasing lactation performance during these time intervals could markedly improve financial returns for the dairy farmer.

The dairy industry is already rearing heifers rapidly to bring them into early puberty, early breeding, and early lactation. This shortens the overall period of ‘non-performance’ in a cow’s total lifetime. However, the non-lactating period, or dry period, between successive lactations still collectively corresponds to a significant proportion of the lifetime, and this period does not generate income for the dairy farmer. Scientists are now looking to stem cells as a means to extend the lactation period.

Shortening, or even eliminating, the dry period would substantially increase the productivity of each cow. This period corresponds with the biological and hormonally driven imperative linking lactation with reproduction. In humans, lactation simply follows as a consequence of reproduction, i.e. gestation and lactation are usually separated in time. However, in the dairy cow, there is typically substantial overlap in the lactational and pregnant states because the cow typically becomes pregnant about four months after the previous calving, and is therefore still lactating.

During the later stages of pregnancy, the cow diverts precious energy away from making milk and puts it into growing a fetus. Lactation during this period declines, eventually ceasing in the dry-off period. After giving birth the cow takes about a month before peak lactation is reached again.

Extending the lactation period by decreasing the dry period would not only increase milk production, but it would also reduce the total amount of time a cow spends in the perinatal period in its overall lifetime. The perinatal period is linked to increased health risks and additional costs.

Birth and death of milk-producing cells

Mammary epithelial cells (MECs) are the milk production factories in the mammary gland. Milk production is dependent on both the number and the milk secretory capacity of MECs within mammary tissue. Both of these factors, particularly the latter, increase during the approach to peak lactation. The number of MECs within the tissue is dependent on the rate of cell renewal and cell death. Amazingly, this race between cell renewal and cell death results in the replacement of the majority of MECs during each lactation cycle.

After peak lactation, the steady decline in milk production is caused by both the decreasing milk secreting activity of aging MECs and declining numbers of these cells. This loss of MECs during the later stages of lactation is caused by decreased renewal of MECs and a natural programmed cycle of cell death that eliminates MECs. Scientists therefore expect that increasing the MEC renewal process or decreasing cell death would significantly extend the lactation period.

The complete cycle of lactation is characterised by substantial cellular restructuring of mammary tissue. The repeated cycle of tissue remodelling in the mammary gland during multiple lactations indicates the existence of a cell population with tissue renewal ability resident within the mammary gland.

Stem cells are critical for the normal growth and maintenance of the mammary gland. These cells have the capacity to renew themselves indefinitely and, under the right circumstances, they can produce a variety of different types of specialist cells characteristic of different tissues. Fetal stem cells are the most plastic and can generate all of the different tissue types that make up a living organism.

Mammary stem cells have been well characterised in the mouse and human mammary glands. Indeed, transplantation of a single mammary stem cell into a fat pad in a mouse can generate mammary tissue which produces milk.

Adult bovine mammary stem cells have been identified. It is possible these cells could be activated within mammary tissue to increase the number of MEC precursor cells that, in turn, would produce more MEC and therefore more milk, especially after peak lactation. As these new MEC would be young cells, they would also be expected to be very efficient at secreting milk. This strategy could markedly extend the lactation period, and in an extreme possibility, completely replace the dry period.

The challenges to implementation of this strategy are to find practical and acceptable means to increase the number of stem cells in lactating mammary tissue, to specifically activate the production of MEC precursors, and induce self-renewal of the stem cells. The industry may unknowingly be already inducing some of these changes through practices such as increased daily milking frequency and the administration of somatotrophin. There may also be unidentified and fundamental differences in mammary stem cell populations in different breeds of dairy cattle that could create a challenge in determining the most effective methods of increasing milk production in cows.

In biology there is usually a physiological cost for every commercial benefit. Some evidence exists that the dry period may be important for maximising milk production in the succeeding lactation. Consequently, any implementation of a strategy designed to reduce the extent of the dry period will need to be carefully assessed for unexpected physiological side effects and untoward impacts on the welfare of the cow.

The eventual elimination of the dry period may be possible, but it is only an embryonic ambition at this time. Still, one day the dairy industry may use a cow that keeps on giving.