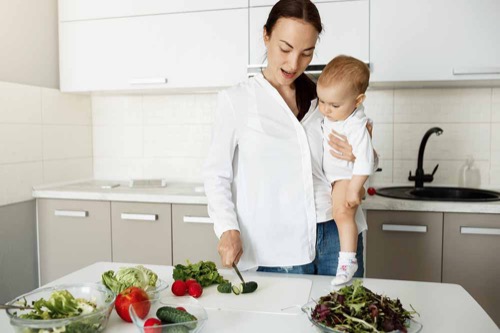 Human milk is known to provide a variety of nutrients that aid infants’ growth and development and are beneficial to their health (1). But as children grow a little older, they often don’t meet recommended dietary guidelines, particularly when it comes to eating enough fruits and vegetables (2).

Taste is often an important factor in determining food preferences and choices, especially in children (3,4). Studies have shown that these taste preferences can be influenced by the flavors that infants experience early in their life, such as from their mothers’ milk. The flavors in human milk can in turn be influenced by maternal diet (5).

The study suggests that breastfed infants may be exposed to bitter vegetable flavors at an early age, and may thus accept these flavors more easily, leading to healthier food choices later in life. “We hypothesized that being exposed to low levels of bitterness via breastmilk could possibly contribute to bitter taste acceptance of infants, similar to the acceptance of carrots by infants after breastfeeding mothers had been eating carrots,” the researchers said (7).

Previous studies have shown that children who were breastfed are less picky and more willing to try new foods as they grow compared with children who were fed formula (8). In addition, the overall duration of breastfeeding has been shown to predict vegetable intake (9). “However, our study was exploratory and the association that we found, as well as the possible effect of varying bitterness levels of human milk on later vegetable acceptance, need further evaluation,” the researchers said.

The researchers initially set out to describe the sensory properties of human milk, of which there is relatively little knowledge (10,11). In particular, they looked specifically at differences in the sensory and analytical properties of fore milk—approximately the first 30 milliliters of milk expressed—and hind milk—the remaining milk expressed. “Since we know that certain sensory characteristics of breast milk can be influenced by maternal diet, we wanted to look at the relationship between the bitterness of her diet and the bitterness of human fore and hind milk, as an initial indication of the transference of the bitter taste to breast milk,” the researchers said.

Twenty-two lactating mothers were trained on reference samples to become familiar with the five basic tastes—sweet, salty, bitter, sour, and umami—and creaminess. The mothers then kept a 24-hour food diary to assess the bitterness of their diet, followed by a sensory self-assessment of their fore and hind milks to assess how bitter they were perceived to be. The researchers also conducted analytical measurements of fore and hind milk to quantify fat, carbohydrate, total protein, and free amino acid content.

The researchers found a significant positive correlation between the bitterness of the maternal diet consumed 24 hours before lactation and the perceived bitterness of fore milk but not hind milk. The bitterest foods in maternal diet were fruits and vegetables, caffeinated beverages, and cheeses, with vegetables being particularly bitter.

It’s still unclear why the bitterness of the maternal diet was correlated with the bitterness of fore milk but not that of hind milk, and future studies will be needed to further explore this question. The researchers suggest that the answer may lie in the differences between fore and hind milk, with fore milk being significantly less creamy, less fatty, and more watery than hind milk. Previous studies have shown that fatty acids present in human milk can mask the bitterness of certain bitter solutions (12).

The study suggests that consumption of bitter foods in the maternal diet may influence the bitterness of human fore milk, and could thus serve as an additional factor in children’s flavor learning. “Our study was exploratory but it has added to our hypothesis that the bitterness of human milk could potentially be an influencing factor on children’s later vegetable acceptance,” the researchers said.

“The taste of human milk is difficult to study, and we hope that this paper will inspire additional research that will help to further develop the knowledge of the importance of the maternal diet during breastfeeding, taking into consideration the international nutritional recommendations for lactating mothers,” they said.

5. Mennella, J. A. 2007. The chemical senses and the development of flavor preferences in humans. Pages 403–14 in Textbook on Human Lactation. Hale Publishing, Plano, TX.