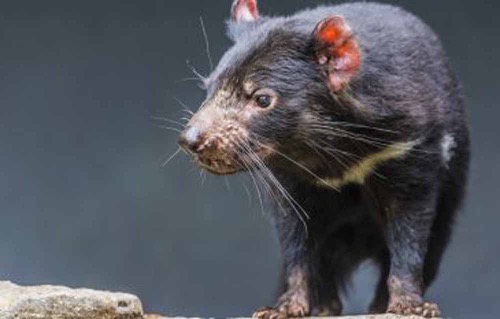 The Tasmanian devil is best known for being a swirling, growling, trouble-making cartoon character. But the marsupial mammal’s reputation is about to get a complete makeover, thanks to new research on the function of proteins secreted in their milk and their skin [1]. These proteins, called cathelicidins, are found in all mammals, and are known to have antimicrobial properties. However, a team of Australian researchers found that those secreted by Tasmanian devil mothers pack an extra strong punch. In addition to fighting pathogens present in the environment of the developing pups, Tasmanian devil cathelicidins also killed strains of drug-resistant human pathogens, including methicillin-resistant Staphylococcus aureus (MRSA). If these unique proteins can be utilized in the fight against human superbugs, the Tasmanian devil could transform from cartoon villain to public health superhero.

All mammals, from the egg-laying monotremes to the marine-living whales, produce milk for their offspring, suggesting that this evolutionary adaptation has very ancient roots. Olav Oftedal, a leading expert on mammalian milks, believes that milk first evolved in mammalian ancestors (called “mammal-like reptiles” or synapsids) over 200 million years ago [2]. These earliest “milk” secretions came from maternal skin glands that would later evolve into the mammary gland and would have served two functions: (1) to provide moisture to the developing egg and (2) to provide antimicrobials to protect the egg from pathogens [2]. Thus, immune factors are some of milk’s most ancient ingredients, predating the nutritional components that milk is best known for.

Cathelicidins may be one these very early ingredients. This family of proteins has antimicrobial properties and is part of the innate immune system of all living mammals [1], indicating they were inherited from a pre-mammal ancestor. Cathelicidins kill bacteria, parasites, and fungi directly and also indirectly, by influencing the actions of other immune functions that kill pathogens (such as the inflammatory response) [1]. Because they are part of the innate immune system, they are not pathogen-specific. Although this may mean that they do not create memory cells like B cells or T cells (both part of the acquired arm of the immune system), cathelicidins have the ability to take down a broad spectrum of pathogens at first sight. This attribute makes them especially beneficial to neonatal and infant mammals, which have naïve immune systems and little to no acquired immunity.

Researchers hypothesize that the unique pattern of growth and development of marsupials favored selection on an increased number of genes associated with these germ-fighting proteins [1]. Marsupials give birth to extremely underdeveloped offspring that are immediately transferred to a pouch to continue their “fetal” development, nourished through maternal milk. Unlike the uterus, the pouch is not sterile; young are regularly exposed to pathogens in their environment. Thus, marsupial neonates and infants are extremely underdeveloped immunologically and at a higher risk for pathogen exposure than their placental mammal cousins [1].

The devil is in the details

A team of Australian researchers argued the Tasmanian devils may have an even greater need than wallabies for strong, broad-spectrum antimicrobials [1]. Offspring are born after only 30 days of gestation and weigh only 0.3 grams [1]. To get an idea of just how small this is, a paper clip weighs around 1 gram. Add to this highly altricial start the observation that Tasmanian devils lead a very aggressive lifestyle (they are not called devils for nothing), resulting in cuts and bites that require pathogen protection. If the calm tammar wallaby makes such potent proteins, what about the truculent Tasmanian devil?

To address this question, researchers Emma Peel and her colleagues began by searching the Tasmanian devil genome for genes associated with cathelicidin proteins. They found six, all on chromosome two. Interestingly, two of the genes (named Saha-CATH1 and 2) have very strong sequence similarities to cathelicidin genes from other marsupials and are believed to have originated over least 70 million years ago. In contrast, three others (named Saha-CATH3, 5, and 6) appear to be species-specific and the result of gene-duplication events during the evolution of the Tasmanian devil. Thus, there is a mix of shared marsupial proteins and those that are unique to the Tasmanian devil, supporting the idea that devils might have unique immunological priorities compared to other marsupial mammals.

The next step was figuring out just where these genes were expressed (that is, which types of cells actually made the proteins that the genes code for). Not surprising for proteins involved in immunity, gene expression was found in the blood, spleen and lymph nodes. But in support of the researchers’ hypothesis regarding protection of naïve offspring, cathelicidin genes were also expressed in the uterus, maternal pouch, milk, skin, and mouth mucosa of Tasmanian devils [1].

The final, and most important step, was figuring out protein function. The team made synthetic proteins representing each of the six devil cathelicidins (named Saha-CATH1–6) and applied them to pathogen strains (both bacterial and fungal) from several species of mammals, including humans. Three cathelicidins (CATH1, 2, and 4) did not have antimicrobial activity. However, the fact that the genes associated with these proteins are expressed in cells throughout the body suggests that they may be indirectly involved in immunity, influencing the actions of other immune factors [1]. In contrast, CATH3, 5 and 6 were direct pathogen killers.

Fortunately for Tasmanian devil joeys, Saha-CATH1, 2, 4, 5, and 6 are expressed in the milk, the pouch, and the mouth (transferred when mothers lick joeys), providing both direct and indirect immune protection. As it turns out, humans may be quite fortunate, too. Not only did Peel and colleagues find that CATH5 and 6 kill bacteria found in the pouch and skin of the Tasmanian devil, both killed antibiotic-resistant bacteria species that infect humans, including vancomycin-resistant Enterococcus faecalis (VREF) and MRSA. Indeed, CATH5 appears to have diverse antibacterial activity, killing both Gram negative- and Gram-positive bacteria as well as species from the genus Candida, a fungus common in skin infections.

Why are the Tasmanian devil milk proteins so effective against human pathogens? Exactly how these proteins kill the pathogens is still being worked out, but their effect on human pathogens probably has nothing to do with their methods. Indeed, researchers suspect they work the same way as cathelicidins from placental mammals [1]. Their effectiveness is because of their novelty.

The human immune system and human pathogens are in an evolutionary arms race, constantly changing to try and keep up with the other side. In humans, a mutation may be favored because it allows for more effective identification of a particular pathogen; for pathogens, a random mutation that makes them look less like invaders and more like human cells turns the advantage to their side. Technology, in the form of antibiotics (and antifungals, antivirals, etc.), gave humans the edge but only for a short time. Resistant pathogens, nicknamed superbugs, are an inevitable evolutionary outcome, and a major public health concern, leaving scientists scrambling to find effective alternatives.

Human pathogens have never encountered cathelicidins from marsupials, many of which are species-specific, which means the arms race has yet to begin. Could Tasmanian devil cathelicidins be our secret weapon? The findings of Peel et al. [1] suggest they could. Not only were they able to kill the superbugs MRSA and VREF, they did so at concentrations that kept them from being toxic to healthy human red blood cells (compared with human cathelicidins, which kill pathogens but also kill other types of mammalian cells).

Although prescriptions for Tasmanian devil milk proteins might not happen right away, these antibiotic alternatives offer great promise as potential drug candidates. The same is true for cathelicidin proteins from other marsupials; researchers have tested only two species’ proteins thus far, and both have demonstrated the ability to kill drug-resistant strains [1].

The study also provides an important reminder of the importance of an evolutionary perspective to medicine. The number of infectious diseases is growing, and it is critical that we think about pathogens and our own immune reactions as products of the evolutionary process if we are to identify treatments that work in both the short and long term.