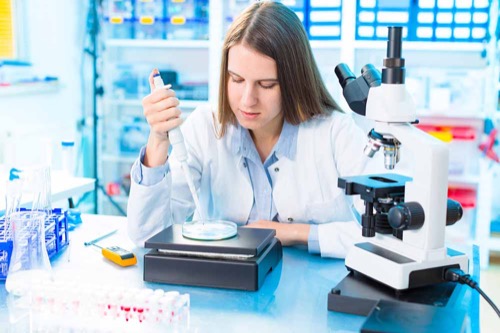 Human milk is rich in sugars, called oligosaccharides, which have been associated with many beneficial effects [1,2]. These human milk oligosaccharides (HMOs) form the third-largest component of human milk, and are known to modulate the immune system, protect against pathogens, and help establish the gut microbiome [3-9].

Given their beneficial effects, it’s no surprise that researchers have been interested in synthesizing HMOs for their potential to be used as nutraceuticals or therapeutics. In the past decade, they have developed a variety of methods to synthesize these sugars [10,11]. But despite having identified hundreds of HMOs so far, researchers have only been able to synthesize a small number of them in large quantities, and the synthesized HMOs tend to have relatively simple structures.

“Most of the research dealing with human milk oligosaccharides, especially synthetic ones, mainly deals with relatively small oligosaccharides,” says Geert-Jan Boons, Professor of Chemistry at the University of Georgia. “But if you look at the composition of human milk oligosaccharides, there are also highly complex molecules,” he says. “To make these very complex branched structures, there are no synthetic methodologies yet,” says Boons. One alternative to synthesizing complex oligosaccharides is to extract them from cow milk or human milk by fractionation. Although this technique has been helpful for trying to replicate the diversity of HMOs found in human milk, it’s not as useful for isolating well-defined individual HMOs.

Without the ability to isolate well-defined HMOs with complex structures, there’s still a lot we don’t know about how their structural complexity affects their biological activity or their potential to be used as therapeutics or nutraceuticals. “I’ve always had an inkling that there must be something to these complex structures,” says Boons. “My suspicion was that there would be major differences in their biological activity,” he says. Boons and others have thus been looking for ways to synthesize complex HMOs in sufficient quantities to investigate their biological mechanisms. “We have been thinking of these issues for a long time, and have been working on chemo-enzymatic approaches,” he says.

In a new study, Boons and his colleagues describe a chemo-enzymatic strategy to synthesize a wide array of complex HMOs [12]. They previously used a different chemo-enzymatic approach to make asymmetric N-linked glycans [13]. “In the new study, we take it one step further, and through relatively simple enzymatic transformations we make highly complex, well-defined human milk oligosaccharides,” says Boons. “This is a wonderful tool for exploring the importance of human milk oligosaccharide complexity,” he says. The researchers found that the complex structures of HMOs affect how different proteins bind to them, suggesting that these structures play an important role in the biological activity of HMOs.

The new synthesis approach relies on a particular enzyme, N-acetyllactosaminide β1,6-N-acetylglucosaminyltransferase, or GCNT2, which is responsible for creating branch points in the HMO structure. “The key feature is that we identified the branching enzyme,” says Boons. “If we install the branching point at the right step in synthesis, one arm can be extended while the other arm is not,” says Boons. This allowed the researchers to build complex asymmetric HMOs step-by-step, using a combination of glycosyltransferase and hydrolase enzymes. “Exploiting these enzymes that make human milk oligosaccharides can provide additional levels of control,” says Boons.

As a proof of principle, the researchers exploited the inherent selectivity of glycosyltransferase and hydrolase enzymes to create a library of 60 highly diverse HMOs with complex structures, which they used to develop a glycan microarray. They then used this microarray to test whether complex HMO structures led to differences in protein binding.

Boons and his colleagues tested the binding of three glycan-binding proteins: a protein involved in immune modulation, a Vibrio cholera toxin and an adhesion protein from rotavirus, a virus that can cause gastroenteritis and diarrhea in infants. “The results turned out to be very dramatic, even more dramatic than I had anticipated,” says Boons.

The researchers found that complex HMO architectures had a large influence on how proteins recognized them, and the complexity of HMO structures affected the selectivity of protein binding in unanticipated ways. “The more complex branched structures are much more potent ligands compared with the simple oligosaccharides,” he says. This suggests that it’s not just the terminal oligosaccharide motifs but the entire oligosaccharide structure that mediates protein recognition. “I think we’re beginning to get a handle for why these complex human milk oligosaccharides exist; because they’re much better ligands,” says Boons.

The new technique could provide researchers with a valuable tool to study HMOs. “Now at least we will have the ability to research almost every possible human milk oligosaccharide,” says Boons. “Our study is a proof of principle, but hopefully it will serve as motivation for others to conduct more studies on these complex molecules,” he says.

The newly-developed synthesis technique is well suited to studying the biological activity of individual HMOs, to find out which ones are beneficial and determine their functions. “The beauty of chemical synthesis is that it is replenishable, we can scale it, and we can get materials of very high purity, so we can have confidence in testing biological activity,” says Boons. “We can make one change at a time to tailor-make a molecule, so we can look at the structure-activity relationship of a particular molecule in isolation,” he says.

In the future, Boons is planning to create a much larger collection of HMOs and use them in additional glycan microarrays, which he hopes will help the research community study how these molecules behave in different biological systems. “We want to move this field into the “omics” era, where we can quickly look at large numbers of oligosaccharides,” he says.

Being able to quickly study a wide variety of complex HMOs could help researchers identify HMOs that are useful as nutraceuticals or as therapeutics. “I think we now have the tools to go hunting for which human milk oligosaccharides should be included in things like baby formula,” says Boons. However, using the new technique to produce HMOs at a very large scale for commercial purposes is likely to be very expensive. “I see this as a discovery tool for human milk oligosaccharides,” says Boons. “If we know the ones that are important, we can use other methods to synthesize them,” he says.

Someday we might be able to use some of these complex HMOs in baby formula to make it more closely resemble human milk, but there’s still a long way to go. “I don’t think we are close to recreating human milk, but maybe we can identify a handful of molecules that resemble the pool of human milk oligosaccharides in human milk,” says Boons. “We’ll still have to do clinical studies, which is a slow process, but now at least we can see a path forward,” he says. “The hope is that this brings us one step closer,” says Boons.