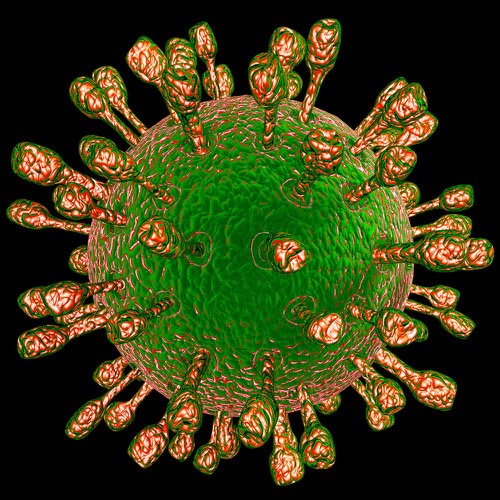 The main culprit behind viral gastroenteritis in young children is a group of viruses called rotaviruses that cause severe diarrhea and dehydration. Having evolved to recognize certain surface molecules on cells that line the small intestine, the rotaviruses latch onto these molecules to launch their warfare and invade the gut. However, mammals have evolved some biological weapons of their own to counter the viral attacks. For example, milk contains many remarkable ingredients, including sugars and proteins, which mimic the cell surface receptors that rotaviruses bind to in the gut. These milk goodies could help protect the infants from gastroenteritis by acting as decoys, mopping up the harmful rotaviruses.

Each year, diarrhea caused by rotavirus infections afflicts millions of children worldwide and kills about half a million children under the age of five, mainly in developing countries (Tate et al., 2012). Rotaviruses are also responsible for serious illness in the young of other mammalian species, giving rise to significant economic losses in livestock production. Two human rotavirus vaccines became available in 2006 and have since proved highly effective (85–100%) in reducing the burden of rotavirus infections in industrialized western countries (Giaquinto et al., 2011). In developing countries, however, vaccination has been less effective (typically 40–70%), besides being hampered by high cost and other barriers to widespread distribution. Scientists and public health authorities are therefore continuing to search for additional means that can help combat rotavirus infections in humans as well as in animals.

Several scientific studies over the past few decades indicated that breastfeeding protects infants from the intestinal havoc brought on by rotaviruses. Researchers long attributed this anti-rotavirus effect to certain sugars, proteins, and antibodies present in milk, but unraveling the details of the molecular warfare is still ongoing.

Researchers at the University of Illinois recently confirmed the hypothesis that sialic acid-containing oligosaccharides present in human milk could thwart such attacks on gut cells by the sialic acid-dependent rotaviruses (Hester et al., 2013). Based on tests in laboratory-grown cell cultures, they reported that blocking rotavirus attachment to cells was most likely the main counterstrategy of the milk sugars. Their data also indicated that even if the viruses prevailed in the binding step, the milk sugars might still put up a fight, for instance by interfering with the viral break-in into the cells or with the ability of rotaviruses to replicate within the cells.

Hester and colleagues concluded that milk sugars could be useful for preventing rotavirus infection in human infants as well as in young animals. They suggested that human milk sugars might even be used therapeutically, for instance in formulas, to reduce the severity and duration of the disease in children already infected with rotavirus. As part of their study, they developed an effective method to examine the rotavirus–milk sugar battle inside the gut of piglets. Following strict animal ethics guidelines, this new animal model provides a sensitive system for screening milk sugars and other ingredients for anti-rotavirus activity.

While this proof-of-concept study demonstrates positive effects of complex milk sugars against a sialic acid-dependent rotavirus that infects pigs, it shows no effect of milk sugars against a human rotavirus that does not need sialic acid to bind host cells. Because human rotaviruses are typically not dependent on sialic acid, there must be additional components in human milk that confer the observed protection of breastfed infants from gastroenteritis.

Focusing on three human rotaviruses that commonly cause gastroenteritis, researchers in Cincinnati, Ohio, hypothesized these viruses would home in on another sugar structure (Huang et al., 2012). They provided the first evidence that a protein protruding from the major human rotaviruses, spike protein VP8*, binds in a specific manner to a group of complex sugars known as histo-blood group antigens (HBGAs). HBGAs are present on the surfaces of red blood cells and cells that line the digestive, respiratory and genitourinary tracts.

The study by Huang et al. suggested that sialic acid-independent human rotaviruses might exploit HBGAs as binding partners to gain entry into cells. Incidentally, HBGAs are also present as free-floating oligosaccharides in several biological fluids, including milk. These investigators found that the HBGA-containing fractions of human milk samples bind to human rotavirus. So there is mounting evidence that milk contains an arsenal of complex sugars fit to fight against different types of rotaviruses.

Many of the proteins in milk are also thought to be key players in defense against pathogenic invaders. For example, the human protein lactadherin inhibits human rotaviruses (Kvistgaard et al., 2004). Lactadherin is one of the building blocks in the thin film of proteins and lipids surrounding the fat droplets in milk, known as the milk fat globule membrane.

Like many of the proteins in the milk fat globule membrane, lactadherin is a glycoprotein, meaning it is embellished with oligosaccharides. The sugars jutting out from the protein surface likely deserve at least part of the credit for the antivirus effect.

Several labs demonstrated that other glycoproteins, such as MUC1, that make up the milk fat globule membrane in both human and cow’s milk also inhibit rotaviruses. These human and bovine glycoprotein cousins vary quite a bit in their ability to inhibit rotaviruses, probably because of differences in the protein structure as well as in the attached sugars (Kvistgaard et al., 2004). There is still a lot to be discovered about their anti-virus mechanism.

Much effort has gone into attempts to develop commercial milk products with anti-infectious properties. In particular, cow’s colostrum—the rich pre-milk fluid secreted during the first few days of lactation that contains high amounts of antibodies—has garnered great interest. Antibodies, also known as immunoglobulins, are glycoproteins on a search-and-destroy mission, capturing foreign invaders such as viruses or bacteria by locking onto specific target molecules on their surface.

A potential barrier to widespread use of colostrum-derived products is their high cost given the precious nature of the raw material. Interestingly, though, a team of researchers from Denmark and Spain demonstrated that rotavirus-neutralizing antibodies were present in an ordinary, commercial whey product, suggesting there might be low-cost alternatives to colostrum-derived antibodies (Bojsen et al., 2007).

However, rotavirus antibodies are easily destroyed by heat treatment (pasteurization), which is used for hygienic reasons in the preparation of commercial bovine whey products. Bojsen and colleagues hence emphasized that it is crucial for manufacturers to optimize the heating conditions to maintain a relevant anti-rotavirus effect.

Clearly, apart from providing nutrition to nursing infants, both human and cow’s milk are packed with defense molecules, some of which have evolved specialized revenge mechanisms in the arms race with rotaviruses. Evidently, rotaviruses are formidable enemies that have too often had the upper hand. But with the emerging promise of human rotavirus vaccines and the potential to boost their success in appropriate combination with breastfeeding practices and advanced milk-derived products, rotaviruses now seem to have the cards stacked against them.