Success of African Cattle Linked to Admixture Event 1,000 Years Ago 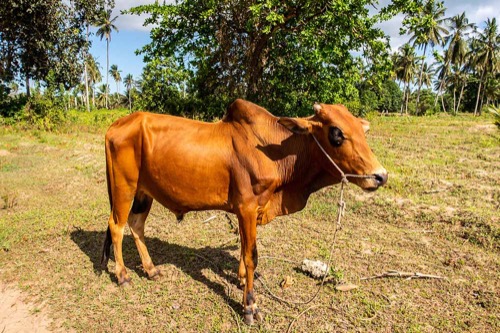 If cattle had ancestry.com or 23andMe (er, make that 31andMe), it would look a lot like this study [1]. An international team of researchers sequenced the DNA of 172 cattle from 16 breeds indigenous to Africa to understand their genetic history and identify genetic markers for traits related to the cattle’s survival and success (and that of the pastoralist populations who rely on them) across the continent over the last several millennia.

Kim and colleagues [1] discovered that today’s African cattle owe their resilience to an admixture event that occurred 150 generations (750–1,050 years) ago between two species, Bos taurus and Bos indicus. Gene flow between these two species increased genetic variation, giving both the humans that bred them and nature a chance to select for traits that enhanced survival and productivity [1].

The majority of today’s cattle breeds in Africa trace their ancestry to both B. taurus (taurine cattle) and B. indicus (indicine cattle) [1]. B. taurus were domesticated in the Near East [2] and their earliest archaeological evidence in Africa dates to between 6,000 and 7,000 years ago in Egypt and Sudan [1]. B. indicus were domesticated on the Indian subcontinent and had a much later arrival in the Horn of Africa, circa 700 A.D. [1, 3, 4].

To figure out how long it took for humans to cross these two species after B. indicus arrived in Africa, Kim et al. [1] had to work backward. First, they determined the level of taurine and indicine admixture found today in each of the 16 African breeds surveyed. Then, they calculated (with the help of some fancy genetics statistical software) how many generations it would take to establish these varied genetic patterns.

Kim et al.’s calculations suggested the two species first swapped genes approximately 150 generations ago [1]. Assuming a generation time of 5–7 years, this would equate to approximately 750–1,050 years ago [1], or about 300 years after B. indicus arrived on the African continent. This means that the mosaic of genomes seen across today’s indigenous African cattle breeds took a mere 1,000 years to evolve. Such rapid evolutionary change (described as an “evolutionary jolt” by study co-author Stephen Kemp [5]) strongly points at selection—natural and artificial—as humans and their cattle moved into new habitats.

African cattle have over 20,000 genes. If one of those genes is evolutionary neutral (that is, it neither increases nor decreases survival and reproductive success), it is just as likely to have come from B. taurus as it is from B. indicus. Genes under selection, however, favor a particular ancestry. Kim et al. [1] identified three genetic regions that showed an excess of taurine ancestry and 13 that showed an excess of indicine ancestry.

Further genetic sleuthing revealed protein-coding genes within these regions related to the inflammatory response, immunity, and heat stress. B. taurus contributed several genes believed to be associated with increased tolerance to the parasitic infection trypanosomosis (aka sleeping sickness), known to be a major obstacle to livestock productivity in Africa [1]. This would have provided an advantage in humid environments where tsetse flies were more common. In contrast, B. indicus passed along genes related to heat stress and water conservation that would have been beneficial in Africa’s more arid environments [1]. Finally, they identified a handful of immune-related indicine genes that may play a role in resistance or tolerance to ticks and tick-borne diseases [1]. Although neither species is native to Africa, B. taurus and B. indicus both brought genes from their ancestral homes that proved advantageous in many environments across the African continent.

Using the Past to Inform the Future

Modern-day African cattle now know that they got their parasitic infection tolerance from their B. taurus ancestors, and their tolerance to heat stress and tick infection from their B. indicus ancestors. Although this knowledge may be of little use to cows, it is extremely useful to modern-day pastoralists and those working in livestock management. Specifically, Kim et al. [1] highlight the importance of genetic diversity. As global temperatures increase and the demand for milk and meat grows, they suggest that breeding indigenous African cattle with exotic cattle could help increase adaptability, productivity, and sustainability in modern-day livestock.