Stinky Cheeses Have a Diverse Array of Peptides 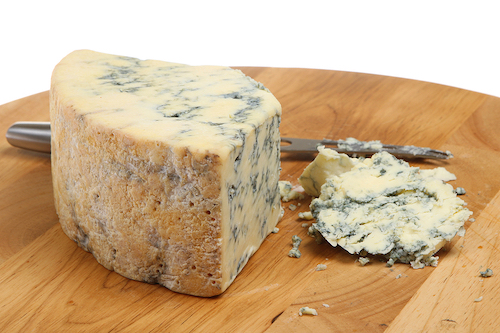 The thought of maggots, fungus, and mites infesting your cheese might make you feel queasy, but researchers are looking into how these unconventional cheese-making methods might actually release peptides, or amino acid sequences, that could be beneficial for your health. In a new study, scientists at the University of California, Davis, profiled the array of peptides found in four particularly pungent cheeses and discovered a huge diversity of peptides—between 2900 and 4700 per cheese [1].

“We selected a few unique cheeses from Europe that had different microorganisms living on them that can contribute to protein breakdown,” says Randall Robinson, a Postdoctoral Fellow who authored the new paper. “We looked at what peptides were formed and their potential bioactivities.”

Milk contains a suite of complex proteins, and during cheese processing and ripening, acids and enzymes break down these large proteins into smaller peptides, or short amino acid sequences similar to proteins but with different functions. Some of these peptides have been found to be bioactive, meaning they can have antihypertensive, antibacterial, or anti-inflammatory properties that can be beneficial for your health [2-6].

“When cheese is made, the milk proteins get coagulated—there’s some protein breakdown,” says Robinson. “Then, during the ripening process, the proteins can be digested a little bit more and potentially form more bioactive peptides. Its something that people haven’t looked at in a lot of types of cheeses.”

Previous studies have looked at the peptide profiles of more commonplace cheeses such as Emmental, Cheddar, and Manchego [7-9], but this time the research team wanted to study a few cheeses—Casu Marzu, Mimolette, Stilton, and Taleggio—with unconventional preparation methods.

“Casu Marzu is the famous one because it’s illegal in a lot of countries,” explains Robinson. “It has fly eggs on it. They hatch and the fly maggots start eating the cheese and digesting it.” The Italian sheep milk cheese is made from Pecorino that’s been exposed to Piophila casei maggots, which after two to three months, make the cheese soft and creamy.

Mimolette, a bovine cheese from France, was another polarizing cheese. The hard cheese has mites added to its surface, and the cheese is banned in the United States. Stilton is a bovine cheese from the United Kingdom, and its interior is inoculated with the mold Penicillium roqueforti, giving it a sharp, distinctive blue cheese taste. Taleggio is an Italian cheese ripened in humid conditions and rind-washed with saltwater, so a unique set of yeasts and molds flourish on the cheese. “It’s really soft so it almost melts at room temperature,” says Robinson. “The taste wasn’t too bad if you like cheese. Stilton was super strong. I didn’t like that one.”

In addition to figuring out what peptides could be found in the cheeses, the research team was also interested in comparing the peptide profiles from both the center and the rind of the cheeses—something that previous studies hadn’t yet looked at. Because the interior and exterior of the cheeses are exposed to very different environments and enzymatic activity, they would have differences in the peptides released.

For the study, Robinson took samples from both the inside and outside of the cheeses and separated the peptides from the proteins and fats. The peptides were separated using liquid chromatography, and the amino acid sequences were analyzed using mass spectrometry [1].

What the research team found was a huge diversity of peptides: 2933 for Casu Marzu, 3520 for Taleggio, 3408 for Stilton, and 4701 for Mimolette. Previous research that used older technology isolated fewer than 200 peptides in their respective studies [7-12], demonstrating that the peptide ensembles found in cheese are much more diverse and complex than previously thought. Among the four cheeses, the team found 111 bioactive peptide sequences, with Mimolette containing the highest number at 88 [1]. The majority of these bioactive peptides were found to be antimicrobial or potentially antihypertensive.

The study also quantified the differences of peptidomes on the rinds versus the insides of the cheeses and found drastic differences. In Stilton, for example, only 4.3% of the total peptides were found on both the inside and outside of the cheese [1]. “In the rinds of the cheese we could see digestion of some proteins that weren’t digested very well on the interior,” says Robinson, who gave the example of β-lactoglobulin, a notoriously hard-to-digest protein. Casu Marzu, Mimolette, and Taleggio all showed more fragments of the broken down protein on the rind than the center.

“Lactoferrin was another one that was in high abundance, which is kind of interesting because it’s an antibacterial protein, and when it gets digested, some of the other peptides are also antibacterial,” says Robinson. Mimolette had a surprisingly large number of lactoferrin-derived peptides at 117, and all but one were found on the rind.

Robinson said that a major direction for future research would be to analyze the bioactivities of more dairy peptides. Out of the thousands of peptides identified in his study, less than 5% had been studied for potential bioactivity. “There’s this huge collection of peptides where we don’t really know what they do yet, but they could be influencing our health in ways that we don’t know about,” he says. For peptides that have known health benefits, more research needs to be done to determine how and in what quantities they could be consumed in order to confer a possible health benefit. Studying the diversity of dairy peptides is still in its infancy, and the field has exciting potential when it comes discovering possible health benefits.