Something to Bark About: Humans and Dogs Co-Evolved Adaptation for Lactose Digestion in Europe and the Middle East 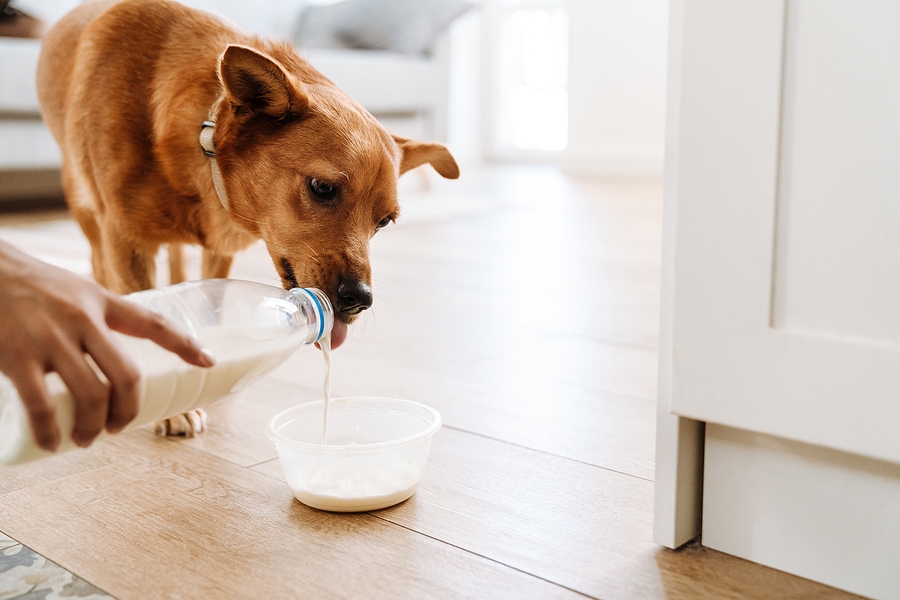 Humans and dogs may be distant relatives on the tree of life, but they share very similar evolutionary stories. In high-altitude Tibet, humans and dogs have the same gene mutation that reduces physiological stress from low oxygen levels [1]. In West Africa, both human and dog genomes show evidence of natural selection for a gene that provides protection against malaria infection [2]. And now a new study [3] reports European and Middle Eastern dog genomes, like those of their human companions from the same regions, are more likely to have a mutation that allows them to drink milk.

Adaptations to high-altitudes and malaria reflect shared environments, but an adaptation for lactose digestion reflects shared food. As humans adopted and adapted to new dietary practices, so did their four-legged companions that consumed their leftovers. Dog food companies might have you believe that your dog is essentially a carnivorous wolf with floppy ears and a wagging tail, but genetic studies [3-5] demonstrate that being human’s best friend resulted in more human-like digestive abilities.

Survival of the Friendliest

Dogs are the first animals domesticated by humans, but the when, where, and why of their domestication are still being worked out by researchers. “Dog evolution is highly debated,” explains Dr. Jessica Hekman, DVM, PhD, a veterinary researcher at Karlsson Laboratory in the Broad Institute of MIT and Harvard, “but the current consensus is that the domestication event happened close to 30,000 years ago.” Genetic data indicate that the closest living relative of dogs (Canis lupus familiaris) are gray wolves (Canis lupus), and that both are descendants of a now-extinct wolf species [6]. As for where dogs were domesticated, “we actually have no idea,” Hekman says. “But not in North America or Australia, probably in Eurasia.”

If these dates and location hold, dog domestication began during the Last Glacial Maximum of the Pleistocene when much of Europe and Asia were covered with ice sheets and human populations were practicing a hunting-gathering mode of subsistence. “The invention of agriculture did not spur canid domestication,” says Hekman. Then what did? A leading hypothesis suggests prehistoric table scraps may have led to wolves domesticating themselves [7]. Friendlier, less timid wolves could have benefited from staying close to human camps to scavenge on leftover meat. In turn, humans could have benefited from their presence if these friendlier wolves helped keep other predators away.

By the time humans started domesticating plants and dairy animals, dogs were an integral part of human culture [8]. And human cultural practices, in turn, had major impacts on dog evolution. As Hekman explains, “dogs literally change themselves to fit in to our niche, because we create so much food.”

In parts of the world where excess food included milk, yogurt, and cheese, it stands to reason dogs could have been under similar evolutionary pressures as humans to adapt to lactose digestion. All mammals are born with the ability to digest the milk sugar lactose, via the enzyme lactase, but then essentially “turn off” lactase production after weaning. Among humans, natural selection increased the frequency of lactase persistence—through genetic changes that keep the lactase enzyme turned on—in multiple populations that have a long history of dairy culture.

Dog and wolf genomes were compared to determine whether dog breeds that trace their ancestry to Europe and the Middle East were under similar evolutionary pressures for lactose digestion [3]. The researchers analyzed the genomes of 242 European and Middle Eastern dogs, 38 Southeast Asian indigenous dogs, and 41 gray wolves for evidence of positive selection. Mutations can increase in frequency in a population for many reasons, but if they do so because they offer a selective advantage (that is, they increase reproductive success or ability to survive), they will leave a telltale signature in the DNA.

Using statistical tools that identify these genetic signatures of positive selection, the team identified three genetic markers from European dogs with strong positive selection signals [3]. One of these three markers was in the lactase (LCT) gene and was found in 91.7% of European dogs, 61.8% of Southeast Asian dogs, and just 6.1% of wolves [3]. Based on research in mice and humans, the genetic change associated with this LCT marker is believed to increase the expression of the LCT gene; dogs who have this mutation would keep this gene turned on more and make more lactase than those that have the original, or ancestral, LCT gene [3].

These results suggest that in places where human populations relied heavily on dairy for nutrition (either by dairy farming or pastoralism), humans and their dogs evolved adaptations for improved lactose digestion. Dr. Pat Shipman, Professor Emeritus of Anthropology at Pennsylvania State University, is not surprised by these results. “Adapting to milk obviously meant a new, high-protein and high-fat source of food. Dogs obviously would reap similar advantages [to humans] if they could digest a milk-based diet.”

The impact of agriculture on dog evolution is not limited to lactase persistence. Compared with wolf DNA, dog DNA was found to have more copies of the gene for amylase, an enzyme that helps digest starchy foods [4]. Human populations that eat diets high in starch have more copies of the amylase gene than do those with less starchy diets [9], suggesting selection favored increased copy numbers in both humans and dogs in response to dietary changes. Lactase persistence adds one more example of convergent evolution between dogs and humans that resulted from dietary changes during the development of agriculture.

For those wondering what these results mean for their own dog’s ability to digest lactose, take note. The mutation that increases the expression of the LCT gene is nearly fixed (that is, close to 100%) in dog breeds of European and Middle Eastern ancestry but is also present in more than half of the dogs from Southeast Asia. The lower frequency in Southeast Asian dogs may be because of reduced selective pressure for lactase persistence in this region or it could be an artifact of their smaller sample size in the data set. “I wouldn’t draw the conclusion that since my dog’s breed is historically from a particular part of the world, my dog will be lactose intolerant,” says Hekman. To get a better idea of how the lactase persistence mutation is distributed across current dog breeds, future studies on lactase persistence should increase the number of non-European dogs. Perhaps one day soon, dog DNA analyses can tell you your dog’s breed and whether they can eat a bowl of ice cream without digestive issues.