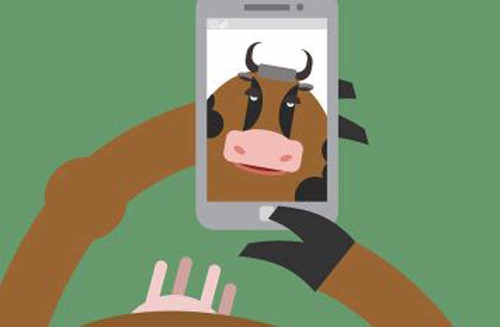 Parallel advances in biology and information technologies are converging into hybrid devices with the potential for widespread impact. Among other areas, these hybrid technologies will revolutionize field measurements and on-site analytics. A recent study by Ludwig et al., described the development of a novel device that has capitalized on these technologies and, in a pilot project, demonstrated its use in milk analysis [1].

Measurements that can be made cheaply and simply on the farm, or in processing factories, can quickly provide crucial information for decision makers. Development of micro- and nano-scale, bio-analytical samplers has advanced considerably in recent years, and will fundamentally change our capacity to make complex biological measurements on site that currently require well-equipped laboratories (see e.g. [2-5]). One example of this emerging technology is the Portable Protein Microarray.

Proteins are the building blocks of cells, tissues, and whole organisms. They also provide the means for these cells and tissues to perform their physiological duties, e.g. muscles are packed with proteins that work together to contract and give us strength. We also recognize proteins for their nutritional value, and milk is a great example of a rich nutritional source of protein. Because proteins are so intimately involved in biology, they are also very useful for monitoring processes or detecting events, in which case we refer to them as biomarkers.

There are many laboratory assays that have been designed to detect protein biomarkers for a range of purposes. For example, we can measure a small amount of a single protein in the complex mixture represented in milk. We can also detect changes to proteins in milk that may be associated with mastitis, or a particular stage of lactation. However, accurate measurements of this type require costly laboratory processing and equipment. More recently, there is increasing interest in developing tools that will provide this information on-site and in real time. One of the tools that has tremendous promise for such a purpose is the protein microarray.

The protein microarray is an existing technology that is best described as a miniaturized tool for measuring individual proteins in a complex, and often unprocessed sample (see e.g. [6]). This is commonly achieved using tiny nano-scale amounts of a panel (or array) of antibodies. Each antibody is customized to recognize just one type of protein in the sample. Ludwig et al., [1] have now married a portable version of this technology with smartphone technology to produce a prototype of a system that does not need a laboratory and can deliver instantaneous results. The team that developed this innovative technology focused on demonstrating its use analyzing milk samples in the field. They named this new technology the Portable Protein Microarray and, for those who need to measure and interpret biological information quickly, it holds enormous potential.

The essence of the invention is the use of existing smartphone camera functions to capture images from a protein microarray. This provides an added potential to send results to any other phone or compatible device. Both the smartphone and the protein microarray are existing platforms, but what the scientists developed was an interface that would connect the two. Using a 3-D printer, they printed a microscope to fit onto the lens of the smartphone camera.

They then wanted a real-world test to demonstrate that the device would work. They chose milk because of its complex mixture of proteins and set the challenge of detecting minute quantities of an antibody generated by the immune system of dairy cows treated with recombinant bovine growth hormone (rbST), also known as somatotropin. Although there are issues associated with use of rbST in some parts of the world, the reason for choosing to detect this biomarker was entirely related to the technical challenge. They also looked for a protein called IGF1, to demonstrate that they could multiplex, that is, detect more than one protein simultaneously. For these assays, they used antibodies bound to a molecule that was excited by the LED light fitted into the microscope adapter. The scientists also developed a simple smartphone app for capturing and analyzing the signals from the microarray.

The study demonstrated that the prototype system was effective in measuring the targeted proteins. It proved that the Portable Protein Microarray system is viable for field applications. There are still avenues for further developments, but even if we consider only our interests in farming and the dairy supply chain, there are many other potential uses. On the farm, for example, it could quickly check for the presence of protein biomarkers that indicate health status of an individual cow using milk or other biological fluids, or even at herd level using milk from the vat. A rapid detection method at factory level may also be useful for estimating concentrations of valued proteins, perhaps the presence of different amounts of casein variants, like A2. Potentially, the technology may also be developed to identify protein fingerprints, or trace sources of unwanted contaminants.

One thing is certain, with the remarkable growth of precision farming and automated systems for farm management, nanotechnologies and information technologies are here to stay, and will continue to impress with innovative applications.