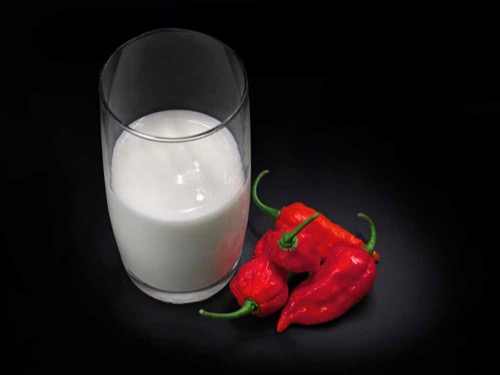 Every so often on The Jimmy Fallon Show, celebrities attempt an interview whilst eating chicken wings that are dowsed in chili sauce. With every next chicken wing the sauce gets hotter, and the celebrity responses become less coherent. There is always a glass of milk on the table. It is there, presumably, because the show’s producers know that milk has been shown to be especially useful at extinguishing the sensation of burning in the mouth. Indeed, SPLASH!® previously reported on milk’s great powers as a palate cleaner. In a recent issue of the journal Physiology and Behaviour, Alissa Nolden of Penn State University and her colleagues put milk to the test again [1]. They evaluate how well both fat-free and full-fat milk fare against other drinks. Their result that full-fat milk beats alternatives to milk was unsurprising. But the fact that fat-free milk also performed well suggests that milk’s ability to reduce the burning sensations left by chili peppers may result, in part, from its protein components, rather than merely its fat content.

The substance that makes chilis hot is capsaicin. It is a non-polar molecule, and for this reason, liquids that contain fat have been thought to be the best candidates to bathe one’s mouth in when suffering from a chili-scorched mouth. Thus, experiments have pitted olive oil against ice cream and milk, to test which of these fat-containing substances is considered by participants to be most effective at quelling capsaicin-induced discomfort. This previous research has shown that fat content on its own isn’t everything. Milk outperforms olive oil, which has much higher fat content because, it is thought, its tiny fat droplets are dispersed in the form of an emulsion. This means that they are easily able to flow around the mouth and block the non-polar-molecule-attracting receptors (called transient receptor potential vanilloid-1) that surround the taste buds, to which capsaicin binds [2].

The recently published research by Nolden and her team instead tests milk with two different levels of fat content against several common beverages. The experimental set-up required the 72 participants to drink a small amount—just 30 ml—of spicy tomato juice (specifically, “Master of Mixes 5 Bloody Mary Mix”). Immediately after swallowing it, they had to rate the strength of the burning sensation that they experienced on a scale of from 0 to 100, with 100 indicating “the strongest imaginable sensation of any kind.” Then they quickly consumed a test beverage that was provided in a 40-ml aliquot, and they continually re-evaluated the strength of the burn in their mouth every 10 seconds for the next two minutes.

Between each two-minute evaluation process, the participants took a short break to let any remaining oral flames die down. That done, they moved on to testing the next beverage among those up for evaluation. The full list was composed of water, full-sugar cola, cherry Kool-Aid reconstituted from dry mix, seltzer water, skim milk, whole milk, and a brand of non-alcoholic beer called O’Doul’s. To ensure that neither the temporary building up of tolerance to chili, nor a crescendo of unrelenting burn affected the results over the course of the experiment, the order of the test beverages was different for those taking part.

To analyze the results, the researchers adjusted each participant’s score according to their individual sensitivity to chili, so that records of the degree of burn abatement could be compared on the same scale. Relative to suffering the effects of capsaicin with nothing to drink, all of the beverages significantly reduced the burning sensation. The beverages that were most effective 10 seconds after swallowing the hot Bloody Mary mix were Cherry Kool-Aid, alcohol-free beer, full-fat and fat-free milk, with little to distinguish them. However, over the course of the two minutes of monitoring, both milks started to overtake and clearly outstrip the other beverages in the chili-burn-quenching stakes. At the end of the test period, both full-fat and fat-free milk were approximately equally effective. Sugary beverages—Kool-Aid, beer, and cola—formed a group that performed clearly worse than milk but also clearly better than water.

These findings are intriguing because they suggest that mechanisms involving sugar and protein may reduce capsaicin’s effects, in addition to the better-known mechanism that involves fats blocking the capsaicin receptor (TrpV1). The details of these additional mechanisms are unclear. Other researchers have proposed that sucrose has an analgesic effect via the opioid system [3]. That is, it reduces the feeling of pain because it encourages neurons in the brain to release neurotransmitters such as endorphin, and these activate opioid receptors there.

The evidence that proteins might also work against chili-burn comes from the milk results. Skim milk contains roughly the same level of protein as whole milk, while virtually lacking the fat component. The fact that the two milks performed equally well in the experiment suggests that a mechanism involving protein may even be more effective than one involving fat. Nobody is sure why protein might have this effect, but one suggestion is that casein—milk’s most common protein—might solubilize or emulsify capsaicin, and in doing so stop much of it from reaching receptors because it is stuck in solution. The research to back up that idea, however, is yet to be done. Nonetheless, it does suggest there may be wisdom in chewing the chicken wing and drinking a glass of milk at the same time as one consumes chili sauce.