The Search for Dairy Genes 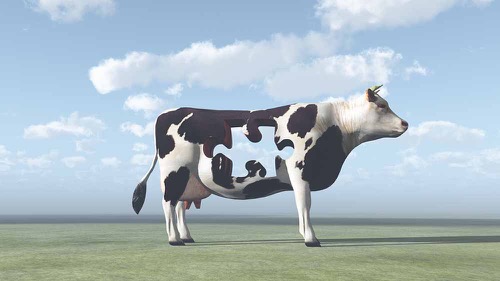 The search for gene variants that define a high performing dairy cow continues in earnest with the emergence of tens of thousands of genotypes and an increasing number of genomes sequenced. One of the ways that this can be accomplished is by comparing diverse breeds of cattle. Lee et al. (1) took this approach using the Korean Hanwoo breed, and by comparing this breed with Holsteins, reported findings of highly selected genes.

From the time of domestication, herders and farmers have been practicing selective breeding, eventually giving rise to cattle breeds that today number approximately eight hundred. Breeds that are most numerous include dairy cattle, especially the black and white Holstein-Friesian breed.

The original practice of applying personal preferences for selection evolved into a modern and sophisticated science. The latest genetic tools to apply to this science are “personalized” individual animal genome sequences and SNP genotyping arrays. These same tools are used to evaluate the genetic makeup of existing breeds, with dairy breeds, specifically Holstein-Friesian, as a reference point.

Selective breeding and the formation of breeds produces region of the genome that have a much higher frequency of characteristic gene variants when compared with ancestors or diverse breeds. They appear within blocks, referred to as haplotypes, within the genome. Along with haplotype blocks, additional SNP variants accumulate over time. So there are haplotype blocks on each of the chromosomes that are characteristic of specific breeds, and within the breeds there are haplotypes that are associated with variation in the phenotype of individuals. However, at some point the most important DNA variants within these blocks- those that have a major impact on a desirable trait- become fixed within the breed or subpopulation. These genomic features are generically referred to as “selective sweeps,” which together create signatures that can be read from the DNA sequence of each animal. Geneticists working in herd improvement are interested in identifying selective sweeps because they point to the genomic regions within a subpopulation or breed that are most important for production traits. Dairy cattle feature prominently in these studies.

One way to identify selective sweeps is to compare diverse breeds. This was the approach taken by Lee et al. (1) in characterizing selective sweeps in dairy cattle. They contrasted the genomes of Holstein cattle with the Korean Hanwoo breed. Korea is a peninsula, and due to this geography, this breed developed in isolation from ancestral stock over a 4,000-year period. The Hanwoo was originally bred for pulling plows or wagons, but eventually became a domestic beef breed valued for similar meat characteristics to those of Wagyu. Meanwhile, on the other side of the planet, ancestors of the Holstein-Friesian breed developed in Western Europe, initially from ancestral stock brought by migratory tribes around 2,000 years ago. Of course, this breed is now the most productive and widely used dairy breed in the world. So compared with Holstein-Friesian cattle, Hanwoo are about as diverse as any that can be imagined.

There is a series of methods that have been developed for detecting selective sweeps (2-9). Lee et al. (1) initially chose a procedure called the cross-population extended haplotype homozygosity test or XP-EHH. This analysis was able to detect haplotype differences between the two cattle populations by looking for alleles that had become fixed in the respective breeds. Based on these differences, they found over 250 candidate genes that may contribute to the dairy “signature”. When these were compared with candidates from other studies, over 96% were within regions associated with dairy traits. This encouraged the researchers to dig deeper, and what emerged was a consensus of genes from this and previous studies that included casein genes, plus other genes of known function, namely ITGAV, CSRP1, ATP1A2, CASQ1, RAB1A, SULT1E1 and BMP10.

What do we know about these genes? Casein genes have been recognized for many years as markers of selection and dairy cow performance. Most likely this arises from the capacity of dairy cows to produce a high yield of milk protein. The ITGAV gene produces a protein that controls how cells expand and find their place in an organ or tissue. Little is known about the function of the CSRP1 gene product, but it contains domains that are found in other proteins that provide fundamental cellular functions. ATP1A2 is an enzyme that regulates fluid balance by controlling sodium and potassium levels between the interior of a cell and its surrounding fluid. CASQ1 is involved in calcium regulation, most likely through its capacity for calcium storage. RAB1 is involved in the cellular processes that ensure that proteins are secreted. SULT1E1 is involved in the process of steroid hormone production, and is particularly important for estrogen activity. BMP10 is a member of a family of proteins that have many functions and a complex biology. At this time the precise role of BMP10 is not clear, and we know only of its role in switching between types of muscle protein.

This brief description of functions associated with the genes that were highlighted by Lee et al. (1) provide a good example of the challenges presented by lactation biologists. The proteins produced by nearly all genes function in complex pathways and networks, so individual genes that may have a major effect on the performance of a dairy cow are very rare. It is also much more difficult to find definitive proof of a causal link between a gene variant and a complex trait. This really requires biological experiments that ideally include integrative, functional genomic approaches. Even when these are employed, it is essential to keep an open mind, because sometimes there is not a single gene variant within a haplotype that contributes. A good example of this is the effort to define a role for a single gene in a region on bovine chromosome-6 (10).

Although there is still much work to be done before the mechanisms by which individual gene variants contribute to dairy production traits, what is emerging through convergence of numerous studies based on recent advances in genetics is a common signature that may answer the question, “what makes a dairy cow?”