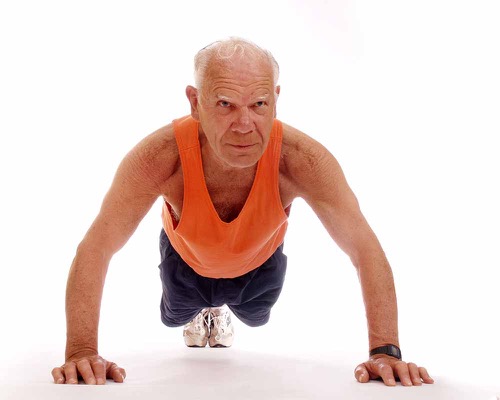 Many of the changes that happen with aging are hard to explain. Among them is a difficulty in maintaining and growing muscle mass. This is known as sarcopenia and has been estimated to account for 1.5% of total healthcare expenditures in Western countries. Over time, researchers have shown that a careful combination of resistance training, plus a diet containing sufficient and particular amino acids, can keep you looking buff well into your autumn years.

It all comes down to a simple relationship: if your body makes more muscle than it breaks down, you will gain muscle. Conversely, if—as often happens in old age—you break down more muscle than you synthesize, you will become less muscular.

But the simplicity of the problem stops there. On the upside, as theory has developed, it has become more optimistic. The understanding that muscle metabolism becomes fundamentally compromised with age has been replaced with the idea that muscle building is merely harder to trigger in older bodies. What’s needed to counteract aging is stronger muscle-building stimuli.

This assertion is derived from data that indicates the muscle synthesis rates in people who were fed increasing amounts of protein after resistance exercise. In young people, the body temporarily hikes muscle manufacture in a dose-dependent manner up to about 20 g of protein (ingested after resistance exercise). But when young people consume more than that amount, the extra amino acids are oxidized rather than used to stimulate muscle synthesis.

Neither protein digestion nor protein absorption rates slow down in the elderly. But greater protein consumption is still required to spur muscle growth.

For instance, in the previous experimental set up, when older people are fed 35 g of protein following resistance exercise, muscle synthesis rates rise beyond the level that they reach when this same group is fed 20 g. (Recall that 20 g is the amount that prompts maximum muscle synthesis in the young.) But what counts as the maximum rate of muscle synthesis stimulated by eating protein after resistance training seems to be about the same for adults of all ages—it’s just that older people need to eat more protein to make it happen. Put another way, although the body’s response to muscle-building stimuli becomes blunted over time, it is not diminished.

What causes the blunting isn’t clear. There are two main theories, which are not mutually exclusive. One suggests the delivery of essential amino acids to muscle cells is limited by blood flow. The second involves insulin, inflammation, and an abnormally high level of lipid in the blood—hence anti-inflammatory drugs are sometimes prescribed to thwart the blunting of the muscle-building response.

What is better understood is that only essential amino acids appear to stimulate muscle synthesis—with one having a particularly important role. Leucine jump-starts mRNA translation—protein making—for muscle growth. It does this by interacting with a ribosomal protein (S6) and other proteins called initiation factors 4E (eIF4E) and 4G (elF4G), in the cytoplasm of muscle cells. Because branched-chain amino acids such as leucine appear in the bloodstream in direct correspondence to their level in the diet, leucine’s effect in prompting protein-making in muscles can be improved by changing what you eat.

This is where a few intriguing studies come in. They deal with two categories of leucine-rich proteins that are by far the most-studied in the context of muscle synthesis: whey and casein proteins, which are both found in milk.

The important difference between whey and casein is the rate at which they are absorbed by the body. Whey is broken down quickly and its constituents exert a muscle-building effect about 3 hours after ingestion. Casein, meanwhile, forms an insoluble ball in the stomach, which slows digestion down. Its constituents therefore take 6-8 hours before getting to work in muscle tissue.

This was recently demonstrated in a neat study1 that followed the muscle building effect of the two protein types. When participants in this study consumed a meal containing both whey and casein proteins, each with a different label, the amino acids derived from casein were incorporated into muscle over a much more sustained period than those derived from whey—proving the point about their absorption rates.

Sports coaches should take note of this: it suggests, for example, that a casein-rich supplement would be most appropriate before bedtime, while a whey-rich one might be more useful in the middle of the day when there is rarely long to wait before the next meal.

And when it comes to the elderly, there isn’t always a clear sarcopenia-beating winner between whey and casein supplementation. One related finding2 is particularly noteworthy, however. It measured the net balance of one amino acid—phenylalanine—in the legs of 15 elderly people and compared what happened when those people ate whey versus a mixture of corresponding essential amino acids. Curiously, the whey group incorporated more phenylalanine into their limb: they grew their leg muscles more than when the same amino acids were delivered in a non-whey source.

So whey, at least, must help muscle building through more ways than the amino acids it contains. The Arizona State University researchers behind the study think the key to this might lie with increased insulin secretion, a known inhibitor of muscle protein breakdown. Whatever the answer, they have uncovered another helpful detail that could improve the health of many.