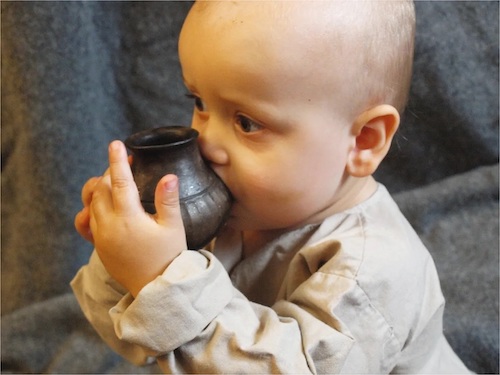 It has been quite an amazing year for milk-related anthropology research. First came a study [1] in the fall of 2018 on barium levels in the molar of a 250,000 year old Neanderthal fossil that demonstrated the child was weaned between two and three years of age, similar to the age of weaning in modern human populations. Using the same methods on even more ancient teeth, a study [2] published this summer found that australopithecines living 2 million years ago likely weaned one to two years later than modern humans. Then in September, an analysis [3] of plaque on several 6,000-year-old human teeth from Great Britain provided the oldest direct evidence of human consumption of cow, sheep, and goat milk. And to end the year comes a study [4] that combines the topics of weaning and dairy agriculture—organic residue analysis on 3,000-year-old ceramic artifacts suspected of being baby bottles found fatty acids unique to ruminant milk fats, demonstrating cow or sheep or goat milks were used as weaning foods for infants and young children after the advent of agriculture.

Archaeologists have long suspected that certain ceramic vessels they unearthed functioned in the same way as modern day baby bottles, owing to their unique shape—that includes a spout or straw-like projection through which a liquid could be poured or suckled—and the fact that they are commonly found in graves of young children [4]. Presumably, that liquid was animal milk, due to the widespread use of animal milks as weaning foods across modern day populations, and because the vessels’ archaeological appearance and increase in prevalence map well onto our understanding of the origins and development of dairy agriculture. The earliest such vessels come from a 7,500-year-old Neolithic site in Germany and they become more prevalent in settlements and graves across central European sites associated with Bronze Age (ca. 5,000 years ago) and Iron Age (ca. 3,000 years ago) prehistoric populations [4].

Putting these suspicions and presumptions to the test, however, has proven difficult. Vessels with small openings limit sample collection for organic residue analysis, the method of choice for trying to reconstruct ancient diets from ceramic artifacts. But a team of European archaeologists and geochemists was recently granted access to three vessels with a more open, bowl form that were found in two Iron Age graves (ca. 2,800–2,500 years ago) and one Bronze age grave (ca. 3,200–2,800 years ago) from southern Germany [4]. Vessel 1 was found in a grave at the feet of a young child (0–6 years of age) and resembles a small bowl with a spout. Vessel 2 was found near the right hip of a one-year-old child and is shaped like a pipe. Vessel 3 was broken but was investigated because of its provenience in a cremation burial of a 1–2-year-old child [4].

The high lipid content pulled from the surfaces suggested the vessels were used in sustained processing or consumption of food or liquids high in fat. But the presence of fatty acids with 12 and 14 carbons, which are rare in prehistoric ceramics, pointed specifically to ruminant milk fat (cow, sheep, or goat milk, but not human) [4]. This finding was corroborated by the results from two other chemical analyses: stable carbon isotope (δ13C) analysis of fatty acids and high-temperature gas chromatography-mass spectrometry to identify specific triacylglycerols (TAGS). Specifically, the δ13C values of lipid residues from all three vessels plotted in the ruminant milk fat region while the TAGS identified from vessel 2 were diagnostic of ruminant fats (TAGS from vessels 1 and 3 were not detectable, suggesting they had been degraded while buried) [4].

Three independent lipid analyses identified ruminant milk fat residue on bottle-like ceramic vessels pulled from child graves. The study team believes this constitutes unequivocal evidence that these vessels were primarily used for feeding ruminant milk to infants and young children, most likely during the mixed feeding period (mother’s milk and other foods) and during weaning [4].

There is one additional piece of evidence that suggests it was infants and children, as opposed to sick or elderly members of the populations, consuming ruminant milk from these vessels. The oldest baby bottle-like vessel yet discovered is nearly 8,000 years old, which predates the spread of the lactase persistence (LP) gene (allowing for lactose tolerance) in Europe by at least 3,000 years [3]. However, infants and young children do not need a LP gene in order to digest ruminant milk as lactase is produced by all humans through infancy and early childhood (after all, human milk has nearly twice the lactose as cow milk). Neolithic (and even some Bronze Age) adults may not have been able to consume substantial amounts of ruminant milk without digestive issues, but it appears that they recognized the same was not true for infants and young children.