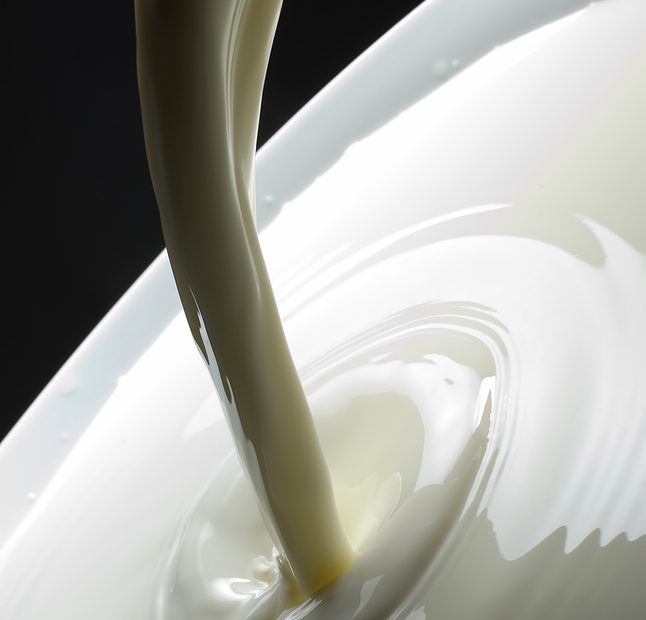 Spock:
“Captain, it’s a unique liquid formulation taken by their young to accelerate growth and development, enhance deductive reasoning and it protects them from alien invasions.”

Kirk:
“Can we use the replicator to make enough to save them?”

Spock:
“Unlikely Captain. We have little understanding of how the liquid is synthesized. Perhaps the new research from the Medrano Lab will help.”

MILK’S RECIPE CHANGES THROUGHOUT THE STAGES OF LACTATION

Milk provides essential nutrients and calcium for rapid postnatal growth and development of the young. It also provides much more. Some of milk’s specialised components promote maturation of intestinal tissues and rapid growth of other tissues in the suckling young. Complex sugars in milk are thought to enhance brain development and an array of milk components protects the young from microbial infections. Milk is a complex mixture of many components, each with a specific and very active biological role.

The molecular machinery synthesising milk in mammary tissue is thought to be similar in most mammalian species and, in general, the components in milk from different species are also similar.

Despite these similarities in design features and components, milk is exquisitely and uniquely formulated in each mammalian species by varying the quantities of its components to perfectly match the needs of its young, which can be born at very different stages of development. While newborn livestock can stand, walk, and run within a few hours of birth, the same developmental milestones in humans are not reached until about 12-18 months of age. This may explain why there are large differences in the relative quantities of many of the same components of cow and human milk.

What is the molecular machinery that makes milk and how is its composition fine-tuned to the particular growth and developmental needs of the young of each species? These are big biological and evolutionary questions with few and only fragmentary answers at present.

The major scientific limitation to answering these questions has been the inability to identify all of the cogs in the machinery and then understand how they work together to produce milk. Rapid technology development is now enabling the first full view of all of the cogs in this world of biological complexity within the mammary cell.

MANY GENES CONTRIBUTE TO THE MACHINERY OF MILK PRODUCTION

Genes encode the protein components in milk, like the caseins, and they also encode the proteins in the cellular machinery that makes all of the other components in milk, like its various sugars and fatty acids. Genes use an intermediary called messenger RNA (mRNA) in the process of making proteins. mRNA is the ‘courier’ that transports the plans for protein designs from head office to the construction site where the proteins are synthesised within a cell. There is typically one plan for each protein, although some individual plans have multiple options that produce different versions of the same protein. The molecular sequence of mRNA can be used to indirectly identify each protein.

There are about ten to twenty thousand mRNA plans in each cell. The proteins made from these plans have many specialised functions. Some proteins help maintain the normal life of a cell while others become part of specialist machinery, like that producing milk in mammary cells.

The milk-producing machinery was previously investigated by peeking through small scientific cracks and seeing only a few components, or cogs, at any one time – a bit like trying to fully appreciate the splendour of the Mona Lisa when viewed through a small kaleidoscope.

Rapid technology development over the last few years now enables a much better understanding of the biological machinery that makes milk. The courier (mRNA) carrying all of the plans for proteins in a cell can be captured and the thousands of protein plans can be simultaneously and rapidly read in great detail. This new technology reveals all of the genes active in mammary cells during milk production. Previously, only a few genes could be investigated at any one time.

Most people appreciate the rapid advances in computer technology, which has doubled in power about every eighteen months for several decades. Amazingly, new DNA sequencing technologies, which includes the ability to sequence mRNA, has increased in capacity by about 10,000 times over the last five years!

This new technological capability has far-reaching consequences in biology, and examples of its power to reveal new information about the milk synthesis machinery are demonstrated in the three publications1,2,3.

Wickramasinghe and colleagues3 circumvented an age old problem. How do you investigate the milk synthesis machinery in mammary tissue of a dairy cow without invasive surgery to remove samples of the tissue? Milk contains a small number of intact cells. Some of these are mammary cells, which have been dislodged from mammary tissue. Wickramasinghe and colleagues analysed the mRNA content of these mammary cells using a new generation of DNA sequencing technology.

They identified nearly twenty thousand individual mRNA at peak lactation in these cells, which surprisingly corresponded to about 90% of all genes in the cow. The most abundant mRNA encoded the plans for proteins like the caseins, which are secreted from mammary tissue into milk. These investigations also revealed many more details about the intricate machinery making milk.

The different stages of lactation have different mRNA emphases. For example, while about 9,000 genes each had the same level of activity in all stages of lactation, about as many again showed large changes in their level of activity (i.e. the level of mRNA that a gene produces) throughout the lactation cycle. The later lactation stages were enriched for mRNA that encode proteins involved in immune defense, an essential function of milk. They also demonstrated that milk proteins causing bitterness in infant formula and poorer quality Swiss cheese were less prevalent during early lactation. In addition, genes involved in producing fatty acids in milk showed marked changes in the different stages of lactation.

These findings may have direct industry relevance as they indicate that milk has quite different components and presumably properties when taken from different stages in the lactation cycle.

MILK-PRODUCING GENES HAVE MANY GENETIC VARIATIONS (e.g. over 100,000 SNP) THAT CAN BE EXPLOITED DURING GENETIC SELECTION OF DAIRY CATTLE

In a follow up study, Wickramasinghe and colleagues2 documented all of the mRNA that may be involved in making proteins necessary for the synthesis and breakdown of milk sugars, including simple and complex milk sugars, as well as sugars that become part of the structures of some milk proteins. This is a complex and poorly explored area. They identified 92 genes involved in these processes. Again, the activities of these genes were often different in the different stages of lactation.

One of the by-products of sequencing mRNA using new DNA sequencing technology is the discovery of very large numbers of small genetic differences between individuals. These are called single nucleotide polymorphisms, or SNP. Canovas and colleagues1 from the same group identified over 100,000 SNP from their analysis of mRNA in mammary cells naturally present in cow’s milk.

These SNP are valuable to the dairy industry. They highlight differences between breeds, confirm parentage, and aid in the development of molecular tools that allow more rapid selection of elite performing animals entering breeding programs.

The quantity of SNP identified also suggests there is still considerable genetic diversity in dairy cattle despite extensive inbreeding. This can be used to great advantage in future selective breeding programs.

The technology development underpinning the many discoveries reported in these three scientific papers has been very rapid, and it was unpredicted even less than a decade ago. The dairy industry is uniquely placed to capture benefit from this new technology as a result of its extensive milk production records, control on breeding, and emphasis on genetic selection of elite performing animals. Both the knowledge and industry applications this technology will help generate in the next decade will be amazing and perhaps equally unpredictable.