Protein for Babies: Too Much of a Good Thing 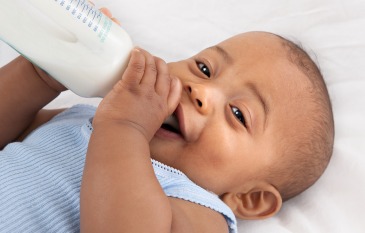 Intuitively, most of us would think that a high protein intake would be advantageous for babies and that the more of it would be better, as protein helps build and maintain our muscles and different tissues. However, in the long term it may actually be the opposite. Recent reports indicate that a high protein intake in infancy is associated with a greater risk of obesity later in life. Given the money that governments spend on managing the serious health issues related to the obesity epidemic, we might rethink the quantities of protein that are being fed to babies.

Key agencies around the globe, including the World Health Organization (WHO), and the Research Institutions and Governments, are warning us about the need to adopt eating habits that help maintain our weight within the normal range. This is not for aesthetic reasons, but rather a matter of life and death. Obesity is accompanied by a range of additional health issues, including heart disease, diabetes, and cancer, to name a few. Alarmingly, it now affects not only adults, but also an increasing population of children, reaching over 40 million (WHO). Obesity problems, increasing in both the developed and developing world, put enormous pressure on health professionals as well as federal health budgets.

Surely, there must be something we can do. A number of studies are suggesting early life programming, starting in utero and continuing postnatally in infancy. Obese mothers give birth to babies that are at higher risk of becoming overweight or obese later in life. Postnatally, breastfeeding seems to protect against future obesity. There are a number of potential explanations for this observation. Protein intake seems to be a key player in the way our body programs its appetite controlling system.

Higher protein intake during infancy has been associated with higher insulin metabolism and greater release of IGF-1. In turn, this results in a greater deposition of fat, more rapid weight gain and a higher body mass index (BMI) into childhood and adulthood. The problem of higher than the requirement protein intake for infants is introduced when formula is used to feed babies. Breast milk’s protein content, although low, appears to match the growth requirements of the human infant. Moreover, breast milk composition is dynamic and changes in response to feeding and during lactation, supporting the changing growth and developmental needs of the baby as it grows. This does not happen with formula.

To address the importance of these protein differences for infant growth, Martin et al. conducted a study in Chile comparing the effects of a standard (i.e. high) and a low protein formula provided after month 3 of age in children born to overweight or obese mothers. Breastfeeding was also compared with the two formulae. Interestingly, it was shown that babies fed the low protein formula had slower growth than those fed the high protein formula. Breastfed babies in this study showed faster growth than the WHO Child Growth Standards, potentially because they were born to overweight or obese mothers, and were therefore predisposed to faster growth. Metabolomic analysis in the infants’ stools and urine revealed that formula-fed infants were metabolically different from their breastfed counterparts, irrespective of the type of formula used. A key difference was found in the fermentation of milk oligosaccharides, which was higher in breastfed compared to formula-fed infants. This further highlights the importance of this breast milk component in gut development and function early in life.

It therefore becomes clear that giving more protein to a baby may facilitate faster growth, but that is not necessarily a good thing. In fact, it may cause more problems than it solves by contributing to the development of obesity, affecting the individual’s life quality in the long term as well as the society as a whole. Breast milk is the natural food for infants, providing maximal nutritional, developmental and protective benefits, in addition to responding to the infant’s changing needs. Replacing the gold standard with a suboptimal source of nutrition at a period that is critical for the development of tissues and organs may have detrimental, and potentially irreversible health effects. However, in cases where breast milk is not readily available, infants may benefit from the use of formulae with low protein content similar to that of human milk. This may be particularly important for babies born to overweight or obese mothers. These babies may need special support early in life to overcome their higher risk of obesity imparted to them in utero.