Protective Cells in Breast Milk: For the Infant and the Mother? 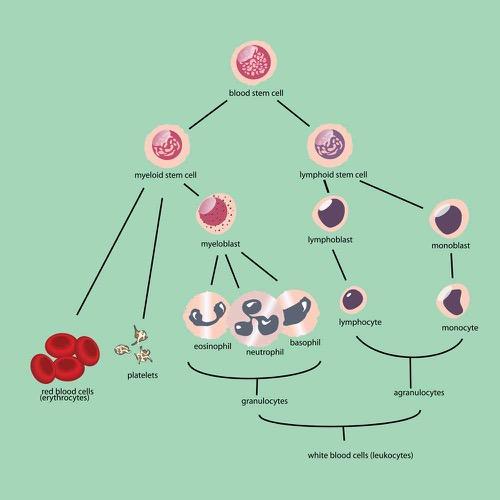 Babies are well protected and nourished while still in the mother’s womb, but what happens after they are born when they are suddenly exposed to a challenging environment full of new and invasive bugs? The mother steps in again by providing breast milk. This magical dynamic fluid contains not only the necessary nutrients for the optimal growth of the infant, but also activated immune cells. Two breakthrough studies show that these immune cells selectively migrate into colostrum11 and milk5.

Which cells are in milk?

Breast milk has long been known to contain maternal cells3; what is less well understood is the proportion of different milk cell types, their significance for the mother and the infant, and factors influencing them. Typically, breast milk is thought to harbor epithelial cells and immune cells. Recent breakthroughs are showing that breast milk cellular composition is more heterogeneous than previously thought and that amongst the different cell types there are stem cells2, 4. Stem cells, however, do not comprise the majority of breast milk cells. Earlier reports from the last century suggested that the dominant cell type in human milk was the immune cell (leukocyte). A closer look at these studies reveals that they mostly examined colostrum and milk in the early lactation period. Moreover, the health status of the mother and the baby was not taken into consideration in all of the studies. So, the question remained unanswered, is the immune cell the dominant cell type in mature human milk, and what is its significance?

In an effort to shed some light on this area, we examined a population of breastfeeding mothers and infants both when they were healthy and when they had an infection5. Since it had been suggested as early as 1953 that immune cell populations in breast milk often share morphological traits with epithelial cell populations6, we used flow cytometry to examine expression of the pan-immune cell marker CD45. This ensured that only immune cells and all immune cells were identified and counted. The results were fascinating and certainly unexpected. Human colostrum contained a significant number of immune cells (up to 70% of the total milk cells), consistent with the greater infant immunological needs in the early postpartum period. However, within the first two weeks after birth, breast milk immune cell numbers decreased to a low baseline level of 0-2% of total cells, which was maintained throughout lactation when both the mother and baby were healthy.

Cell populations change when either mother or baby gets sick

During periods of infection of either the mother or the baby, immune cell levels increased significantly in breast milk, but returned to baseline upon recovery. Infections examined ranged from breast-specific infections such as mastitis, which stimulated the most extreme immune cell response in breast milk (comprising up to 95% of total cells!), to other infections of the mother or the baby, that included the common cold, gastrointestinal infection, vaginal thrush, urinary, eye or ear infection.

It is remarkable that a breast milk immune cell response was elicited by an infant infection whilst the mother remained asymptomatic. And although this response was small in comparison to breast infections, it was nevertheless consistent5. Similar results were recently reported by another study showing that infant fever stimulated a breast milk immune cell response, which returned to a low baseline level after recovery7. This was accompanied by a parallel biochemical response of increased levels of TNFα and lactoferrin, although this was borderline significant and not as consistent as the immune cell response. We reported similar results for breast milk lactoferrin and immunoglobulins5. It is extremely interesting that immune cells in breast milk rapidly respond to either maternal or infant infection, suggesting a role in the protection of the mother as well as the infant.

And the mechanism is…?

These findings support an immunological connection between the mother and the breastfed baby, reinforcing the argument of “human milk for human babies”. They also raise important questions as to how the baby’s infection may stimulate an immune response in the lactating breast and whether this also provides local protection for the breast. We have proposed that oral infant pathogens may be transported into the breast via the retrograde ductal flow during the second half of milk ejection thereby stimulating a local response within the breast5, 8. Although this merits further investigation, the breast milk immune cell response to the infant’s infection highlights an underestimated component of the protective nature of breast milk. It also further reinforces the previously proposed functions of breast milk immune cells for the infant: conferring active immunity at a time when it is most needed and promoting the development of immunocompetence. Breast milk immune cells exert these functions not only in the gastrointestinal tract of the baby but also in distant sites where they are transported via the systemic circulation9, 10. A recent study reinforces these connections by showing a differential lymphocyte distribution between colostrum and maternal peripheral blood, with B lymphocytes, CD4+ T cells, effector cells, and memory cells being present at higher amounts in colostrum than in the mother’s blood11. This suggests a selective migration of these immune cell subsets from peripheral blood to colostrum, supporting the functional significance of these cells early on in the protection of the newborn and potentially reflecting the different status of the mammary environment during the early postnatal period.

Is the breast milk immune cell response to maternal and infant infections a mechanism of protection of not only the baby but also the lactating breast? Can it be used as a diagnostic tool for the assessment of the health status of the lactating breast? Surprisingly, the lactating breast is the only metabolically significant organ in the human body that does not have any medical test of normality. Somatic cell count is a parameter routinely used in the dairy industry to assess the quality of bovine milk and the presence of intramammary infection. The current data on human breast milk refine this test, specifying it for immune cells and extending it to human lactation5. Obviously, differences exist in the cell populations between human and bovine milk, with the latter containing large amounts of immune cells throughout lactation2, 12.

Despite these differences, intramammary infection, such as mastitis, causes significant increases in both total (somatic) cell and immune cell counts in both bovine and human milk, suggesting that these parameters may be a valuable tool for early diagnosis of breast conditions in women and their successful treatment. The importance of this cannot be overemphasized, as mastitis is a primary cause for early weaning and cessation of breastfeeding. Early diagnosis is likely to be instrumental in successful treatment, thus allowing for longer duration of breastfeeding and ensuring the healthiest start for the infant as well as multidimensional benefits to the mother. It is anticipated that as we learn more about the immune cells of human milk and factors influencing them, a deeper understanding and appreciation will be developed for the attributes and intricacies of this wonderful gift, breast milk.

7. Riskin A, Almog M, Peri R, Halasz K, Srugo I, Kessel A. (2012) Changes in immunomodulatory constituents of human milk in response to active infection in the nursing infant. Pediatr Res 71:220-225.