Prolactin: One Hormone, Many Effects 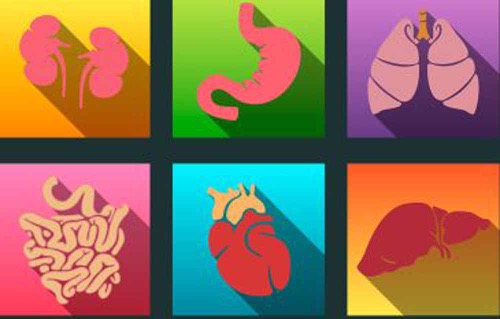 Hormones are the body’s bike messengers, carrying important information from the endocrine glands (e.g., thyroid, pituitary, ovaries) to tissues throughout the body. Whereas GPS helps bike messengers find their intended recipients, hormones know they have found their target tissue when they are able to bind to hormonal receptors attached to a cell’s surface. Like a key fitting into a lock, hormones only bind to their specific receptor. Turning the key and opening the receptor’s lock allows the hormone to deliver its message to the cell, which responds by taking a particular action. The lactation hormone prolactin (PRL) has more than one target tissue, with prolactin receptors (PRLR) found in mammary glands, intestines, kidneys, ovaries, and even the heart [1]. Mammary gland cells respond to PRL’s signal by secreting milk and initiating lactation, whereas cells of the intestines respond by increasing their absorption of calcium [2, 3]. How does the same hormonal signal result in the delivery of such different messages?

The results of a new study in pigs suggest that each tissue may have a different response to PRL’s signal because each tissue has a unique receptor [1]. Although the mammary glands, intestines, and kidneys have the same DNA recipe to make PRLR (the PRLR gene), each appears to use a different combination of ingredients to get to the finished product (the PRLR protein). Thus, rather than a key that fits only one lock, PRL may better be described as a master key able to fit into many PRLR locks, each lock prompting a different physiological response.

It’s all about how you splice it up

The hormone PRL is a chemical messenger produced by the pituitary gland. Traveling through the body’s bloodstream, PRL has the potential to interact with every type of tissue in the body, but it can only communicate with tissues that express PRLR on their cell surface. The lock and key analogy for hormones and their receptors is fitting (pun intended!) because it is their specific shapes that allow the two to bind together, resulting in communication between hormone and cell.

For hormones and receptors (and all other proteins), shape is determined by the order of amino acids, which is in turn determined by the DNA instructions of the gene (i.e., the order of the DNA bases A, C, T, and G). Given this, it may seem surprising that a new investigation by Schennink and colleagues discovered that the actual order of the DNA bases for the PRLR protein differed depending on the tissue in which they were expressed [1]. How do cells take identical genetic information and make different final products? It is all about how you “splice” the gene up.

Messenger RNA (mRNA) is the intermediary molecule between DNA code and amino acid. Not all DNA letters in a gene are used to make amino acids; the coding portions of genes are called exons and the non-coding portions are called introns. Before the mRNA code is translated into a protein, the introns need to get spliced out. During this mRNA processing stage, however, particular exons may also get spliced out. While this sounds like some type of mutation or malfunction, it is actually intentional and quite an amazing biological trick. One gene has the potential of producing multiple proteins depending on which exons are maintained and which are spliced out. 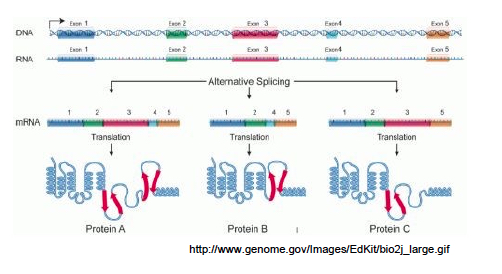 One Gene, Many Proteins

In their examination of PRLR gene expression in pig tissues, Schennink and colleagues [1] found a lot more complexity than simply two splice variants, however. Across the seven tissues they identified 24 different splice variants of the PRLR gene: nine different exons were used as first exons (referred to as exons 1.1–1.9), each of which could be followed by exon 2 and exon 2.1, followed by only one of those exons, or by neither [1].

Trying to make order out of this complexity, Schennink et al. [1] compared splice variant expression by tissue type. Amazingly, certain splice variants were unique to, or expressed in significantly greater amounts, in particular tissues. For example, pig heart tissue expressed the transcript that used exons 1.5, followed by exons 2 and 3 (1.5/2/3) at levels 20 times higher than any other tissue. In contrast, expression of the transcript 1.5/3 was highest in the mammary gland and 1.6/2/3 was enriched only in kidney tissue [1].

From structure to function

Each splice variant identified is derived from the same PRLR gene, and each produces a protein that effectively binds PRL. But because each differs slightly in the exons translated into a protein, each tissue’s PRLR differs slightly in their structure. For proteins, structure determines function. This suggests that the tissue-specific splice variants of PRLR potentially result in PRLR with tissue-specific functions. The emphasis here is on suggests, as receptor function was not part of Schennink et al.‘s study [1]. But it is certainly not a stretch to take their findings and hypothesize that tissue-specific PRLR structures result in tissue-specific functions of PRL. And what an elegant evolutionary hypothesis it is: the pituitary produces one chemical signal that results in various physiological responses from different tissues simply by altering the order of exons in the targets. Who needs a fleet of bike messengers when you can send just one capable of delivering unique messages to different recipients?

Schennink and colleagues [1] propose that the complexity of PRLR genetic expression supports a role for PRL as the regulator of the coordinated, but diverse, physiological responses of mammary and peripheral tissues during lactation. Successful lactation, after all, requires much more than secreting milk from cells in the mammary glands. Macro- and micronutrients must travel from various locations throughout the body to those cells, and other tissues must adapt to the changing physiological demands of lactation (e.g., increased cardiac output due to greater blood flow to the mammary glands) [1]. Although the specific actions of PRL on many tissues throughout the body are still being elucidated, expression of unique PRLR splice variants in mammary glands, heart, intestines, and kidneys only during lactation strongly suggests that PRL is essential to milk production and the physiology of a lactating female.

Pigs have 24 splice variants of the PRLR gene. But what about humans? Are we equally as complex, or perhaps even more so? It is not possible to duplicate Schennink et al.’s [1] work with human tissues, but the researchers provide strong evidence to suggest that pigs are appropriate models for the human PRLR gene. Specifically, they identified a homologous (similar in sequence) human PRLR first exon to that identified from pig intestine and kidney [1]. The human exon also was uniquely expressed in these tissues in humans, offering strong support for a conserved function of PRL (calcium homeostasis) in these tissues in multiple mammal species.

Schennink et al. [1] did not get lucky by finding a homologous gene in their pig tissue samples. They selected pigs as their animal model specifically because pigs have several physiological similarities to humans and are more genetically similar to humans than are mice or rats. While understanding the specific actions of PRL in humans is the ideal, their study (and numerous others, like that of Wongdee et al. [2]) demonstrates that modeling PRL function and genetic expression of its receptor in non-human mammals has strong implications for our understanding of PRL during human lactation. Whether in the rat, pig, or woman, PRL is one hard-working hormone.