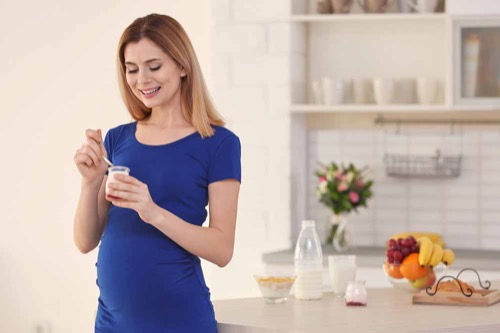 Probiotics are living microorganisms that improve health when they are administered in sufficient numbers. Often, administration means eating—in yogurt form or perhaps as a food supplement. Orally consumed probiotics can shift the composition of vaginal bacteria, making it harder for potentially pathogenic bacterial and yeast species to grow there [1]. Probiotics have also been shown to have anti-inflammatory effects [2, 3]. And it is these reports that encouraged a team of Scandinavian scientists to investigate whether consuming probiotic milk products during pregnancy cuts the probability of developing pre-eclampsia or having a spontaneous, pre-term birth [4]. The results of their study are promising, not least because probiotic milk products are cheap and widely available. The next step will be to further investigate the mechanistic details of the effects.

The study involved a vast number of women, and is all the more convincing for that. The researchers plugged in to a prospective cohort study called MoBa (this stands for Norwegian Mother and Child Cohort Study), which followed more than 70,000 single-birth pregnancies. Because previous pregnancies can affect the frequency of the two outcomes of interest, the team studied only those women in the cohort who had never given birth before. This still left them around 35,000 pregnancies to analyze.

Both pre-eclampsia and pre-term birth have been linked to inflammation in somewhat different ways. Pre-eclampsia is where the placenta develops abnormally, because, it is thought, of problems relating to the laying down of endothelial cells. That process is influenced by the immune system, specifically by uterine or decidual “CD56bright” natural killer cells, and by peripheral “CD56dim” natural killer cells [5]. Spontaneous pre-term birth is linked to inflammation via several routes. The first step typically involves microbes getting into the amniotic cavity. This, for example, can prompt an increase in cytokines like IL-1, which in turn stimulates prostaglandin production by the lining of the uterus, and therefore leads to uterine contractions [6]. Another route links activation of the immune system to disruption of the extracellular matrix of fetal membranes [4].

Whatever the fine details of how the inflammatory response raises the odds of pre-eclampsia and pre-term birth, if probiotics can quench the response, that seemed to be worth investigating. The women in the MoBa study filled in questionnaires about their intake of probiotics, both early and late in pregnancy. Luckily, this was a fairly straightforward business in Norway during the years of the study because there were only two such products on the market—“Biola” and “Cultura,” both milk products—and both contained probiotic lactobacilli. Probiotic food supplements were very uncommon in Norway while the data were collected. Moreover, neither of the available probiotic milk products had vitamin D added. Because vitamin D may on its own reduce the risk of pre-eclampsia, its absence from the probiotic foods facilitated a cleaner evaluation of the effects under investigation.

The team identified two main results, which were recently published in the British Medical Journal’s open access journal [4]. In short, consumption of probiotic milk products during early pregnancy significantly reduced the likelihood of a spontaneous pre-term birth, but consumption in late pregnancy did not. Meanwhile, consumption during late pregnancy was significantly associated with a lower risk of pre-eclampsia, but consumption in early pregnancy was not. So, if a pregnant woman were to deploy these findings to her own benefit, she should regularly eat probiotic milk products throughout her pregnancy. The average amount consumed by women in the study was just over a cup-and-a-half per day, although the amount was not significant in driving the results—instead, it was the mere fact of regular consumption that mattered.

The researchers do not have enough information to pinpoint what is going on inside these women’s bodies, which could explain the reduction in risks during particular periods of pregnancy. There are clues in the literature, though. A randomized controlled trial of probiotic supplements given to pregnant women demonstrated that Lactobacillus rhamnosus (in combination with Bifidobacterium lactis) changed the expression of toll-like receptor (TLR)-related genes in the placenta (these encode important innate immune system proteins) [6]. Other findings suggest that part of the reduction in pre-eclampsia risk may be indirect, deriving from probiotic effects on blood pressure. One component of a diagnosis of pre-eclampsia is high blood pressure. Clinical trials of probiotics of various lactobacilli species in non-pregnant individuals have shown changes in the gene expression of the gut lining, which have lowered blood pressure [3].

There is healthy skepticism about the benefits of probiotic products, and far from every test of their effects finds statistically significant health improvements [7]. The fact that the study found improvements in Norwegian women is especially impressive, however, since Scandinavian countries have among the lowest rates of both pre-eclampsia and pre-term birth in the world. When it comes to preterm birth, 9.6% of pregnancies in the United States lead to spontaneous delivery prior to 37 weeks’ gestation, compared with 5.6%–6.4% in Scandinavian countries. The results of this study suggest an easy and inexpensive way of reducing the risk of two relatively common problems for which modern obstetrics currently has no reliable treatments. That should be welcomed. The next step will be to develop a richer understanding of why probiotics work.

7. Gayle D. Probiotic goods a ‘waste of money’ for healthy adults, research suggests. The Guardian. 10th May, 2016. Available at:
https://www.theguardian.com/science/2016/may/10/probiotic-goods-a-waste-of-money-for-healthy-adults-research-suggests