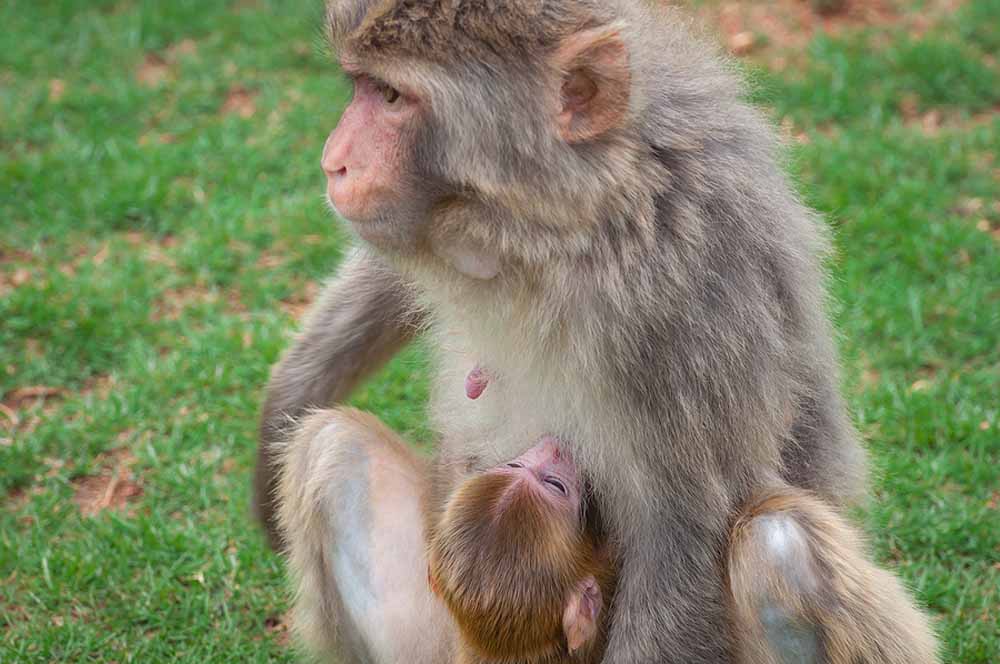 Mammalian milk was once thought to be free of bacteria, but it is now well understood that milk has its own microbiome, or community of bacteria. Although only recently “discovered,” microbes were likely one of milk’s original ingredients and have an evolutionarily ancient relationship with their mammal hosts. Many bacterial species are likely common to all mammalian milks. But because some bacterial strains could potentially benefit infant health by promoting the growth of beneficial bacteria in the gut or enhancing infant immunity [1-4], there may have been numerous opportunities for the evolution of species-specific milk bacterial communities. Does each mammal, including humans, pass on its own unique mix of bacterial strains in milk or is there a more general milk microbiome shared across mammals?

A new study [4] on the milk microbiome of humans and eight other primate species provides a unique opportunity to address milk bacterial communities from an evolutionary perspective. Muletz-Wolz and colleagues took advantage of archived primate milk samples that had corresponding nutritional composition data [4]. In addition to not having to collect any new milk samples, they were able to investigate how milk components, such as protein and fat, might influence microbiome structure. Nonhuman primate milk samples came from five ape species (chimpanzees, bonobos, western lowland gorillas, Bornean orangutans, and Sumatran orangutans), one Old World monkey species (rhesus macaques), and two New World monkey species (owl monkeys and mantled howler monkeys). All nonhuman primates were captive living except for the mantled howler monkeys. Human milk samples came from human mothers living in the Philippines and the United States.

The study identified a core primate milk microbiome of seven operational taxonomic units (OTUs), which are clusters made from similar gene sequences meant to represent a species or genus of bacteria [4]. These seven OTUs were present in >80% of the samples across the nine primate species. Five of these OTUs came from bacterial genera (Acinetobacter, Staphylococcus, Streptococcus) that have been reported from other mammalian lineages. This is exciting as it suggests a more ancient evolutionary relationship between these strains and their mammalian hosts and the possibility of a core microbiome [4].

Across the nine primates, researchers found species-specific patterns in microbiome structure [4]. Western lowland gorilla milk samples came from different facilities and even from different time points in lactation, and yet had microbiome profiles more similar to each other than other primate milks. The same was true for human milk, despite the fact that mothers were from both rural and urban populations in the Philippines and the United States. This finding is particularly interesting when considering that human gut microbiomes, which are believed to be one source for milk microbes, vary between geographic regions. This suggests that bacterial taxa are selectively, rather than passively, transported from the mother’s gut to the mammary gland [2-4], and that these pathways are conserved across human populations [4].

Some other highlights of the study results include the potential relationship between milk nutrient content and milk microbiome structure. Milk from rhesus macaques and mantled howlers were the most dissimilar in fat and protein, and were also the most dissimilar in microbiome structure, suggesting that higher fat or protein milks may favor the growth of particular bacteria [4]. The study also identified longitudinal changes in milk bacterial communities in western lowland gorillas and Sumatran orangutans. The nutrient content of milk remained stable, but milk bacterial communities were dynamic over the course of lactation [4]. These changes over time may map onto changing requirements for infant digestion or immunity as older infants engage with more non-milk foods and become more socially active.

One finding that might not be particularly surprising—but is nonetheless interesting from an evolutionary perspective—is that the human milk microbiome was the least rich, in terms of bacterial species diversity, across the primates [4]. This could be the result of cultural practices (e.g., hand washing, food washing) that reduce human interactions with particular types of microbes. However, the only wild living primate sampled (mantled howler monkeys) also had low milk OTU richness, meaning the lack of diversity in human milk microbiomes could potentially be an ancestral feature unrelated to recent cultural shifts. That captive living primate milks (mostly from zoo populations) were more rich than human milk in bacterial diversity further suggests that factors other than the maternal environment influence the types and quantities of bacteria in milk.

There are more than 300 species of primate, but this study of nine species demonstrates both conserved and recently evolved patterns in milk microbiome structure. It is exciting to think about the bacterial taxa that are shared across all mammals as having a very ancient origin within the mammalian lineage. Equally interesting are the more recently evolved bacterial signatures that distinguish one primate species from another. Both the unique and shared features across primate milk microbiomes deserve further examination to determine how these bacterial species may influence infant health.