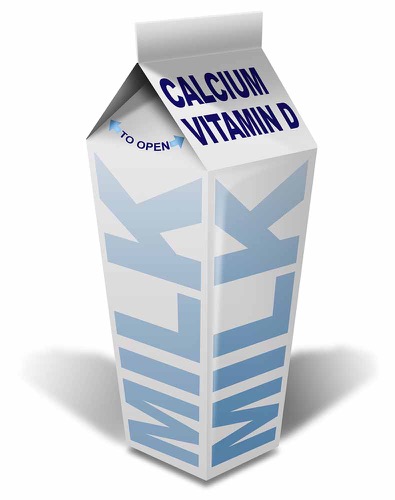 With age comes wisdom. That’s the good news. Age, unfortunately, also comes with less desirable traits, including bone loss. Soon after the human skeleton reaches its maximum bone mass, sometime between 20 and 30 years of age, the rate of bone breakdown begins to exceed the rate of bone formation. Although this physiological process is an inevitable part of aging, it can be slowed to avoid the development of osteoporosis, a bone disease currently affecting more than 10 million Americans over the age of 50 [1].

Of particular interest to clinicians is the potential of nutritional supplements to increase the rate at which calcium is incorporated into bones in older adults. Because a deficiency of vitamin D results in softer bones (better known as rickets in children and osteomalacia in adults), it stands to reason that increased vitamin D intake would result in a stronger skeleton. Indeed, vitamin D supplementation has been a staple in the prevention and treatment of osteoporosis for several decades [2]. It may seem surprising, then, that neither a recent randomized clinical trial [3] nor a large-scale meta-analysis of the literature [2] found any evidence of a benefit for vitamin D supplementation on bone mineral density.

But before you throw your bottle of vitamin D supplements away, use that age-earned wisdom and take note of newly published results [1] from a prospective cohort study on the relationship between dairy foods and bone loss. Sahni and colleagues [1] report that specific dairy foods (i.e., milk, yogurt, and cheese) demonstrate a protective effect against bone loss but only among participants taking vitamin D supplements. Vitamin D, it seems, may be more of a team player than an individualist, working best in combination with the unique set of nutrients—including calcium, phosphorus, and high-quality protein—provided by dairy foods.

It’s Time for a Remodel

The human skeleton should have its own show on HGTV because it is always undergoing a renovation project. Bone remodeling, the process of releasing (or resorbing) old bone and forming new bone, occurs throughout the life course and is essential for preserving the strength of the skeleton and maintaining homeostasis of calcium and other minerals throughout the body [4]. However, as humans age, each remodeling event results in more demolition than improvements—the rate at which bone is resorbed by cells called osteoclasts outpaces the rate at which bone is formed by cells called osteoblasts. This process is further accelerated in women undergoing menopause, where decreases in estrogen levels are associated with increased rates of bone resorption [1-3].

At peak bone mass, the structure of bone is often described as resembling a honeycomb in structure. As bone ages, it starts to look more like a spider’s web, with larger holes where minerals have been released into the circulation. It does not take a structural engineer to understand why larger holes and decreased mineral content make for weaker and more fragile skeletons.

Although it might not be possible to maintain the more densely packed skeleton of a 20-year old into the retirement years, age-related bone loss need not progress to osteoporosis. Osteoporosis is a bone disease characterized by very low bone mineral density and associated with an increased risk of falls and bone fractures [1-3]. And yet, the International Osteoporosis Foundation estimates that nearly 10 million Americans, and 100s of millions more worldwide, suffer from osteoporosis. If the disease is preventable, why is its incidence so high?

One obvious reason is that many populations are not eating enough of the nutrients that help maintain bone. Bone formation requires calcium, so it follows that diets low in this mineral, and vitamin D, the hormone responsible for calcium absorption, would be associated with poor bone health. The current U.S. dietary guidelines recommend that females over 50 and males over 71 consume 1200 mg of calcium and 800 IU (international units) of vitamin D per day, but the most recent Dietary Guidelines for Americans [5] estimates that the majority of Americans in these age groups are missing the mark on both nutrients. Could better bone health be as simple as taking a daily supplement?

The short answer to this question is, unfortunately, no. Calcium supplements do show a protective effect on bone loss, suppressing bone turnover by approximately 20% and improving bone density [6]. However, the safety of calcium supplementation has been questioned, and numerous studies [e.g., 7-9] report an increased risk associated with calcium supplements for heart attack and stroke. With an unclear relationship between calcium supplementation and cardiovascular health, many researchers and clinicians are instead recommending meeting daily calcium requirements exclusively through the diet. Unfortunately, the results from studies that looked at the relationship between dietary calcium intakes and bone health also are conflicting—although bone density showed slight improvements, meeting the 1200 mg RDA of calcium through the diet had no association with fracture risk [10].

The results from research on vitamin D supplementation are equally perplexing. Vitamin D is not a mineral incorporated into bones, but rather it is a hormone responsible for augmenting intestinal absorption of calcium. Calcium digestion is rather tricky, and not all calcium consumed in foods (or supplements) will make its way into the circulation. In its metabolically active form (referred to as calcitriol), vitamin D influences the expression of calcium-binding protein, which is responsible for the active transport of calcium from the intestines into the circulation (precisely where calcium needs to be in order to be transferred to the bones). Although a randomized control trial of vitamin D supplementation in 230 postmenopausal women under 75 years of age [2] found that supplemented groups did indeed increase calcium absorption, supplementation was not associated with any improvements in bone mineral density or decreased risk of falls compared with the placebo group. These findings are echoed by a systematic review of the literature [3] on effects of vitamin D supplementation on bone mass. Reviewing 23 studies involving just over 4000 participants (92% of whom were postmenopausal women), Reid and colleagues [3] report that the number of positive results (i.e., improved bone density) was not much better than what would have been expected by chance.

One possible explanation for these findings is that vitamin D supplementation may only be effective in getting calcium from the gut to the blood but has little influence on getting that calcium into bones—that is, in promoting bone mineralization [3,11]. This perspective helps reconcile why insufficient vitamin D can predispose individuals to osteoporosis, by limiting the amount of available calcium to make new bone, whereas vitamin D supplements do little to improve bone density.

Vitamin D alone may not be very effective for bone health, but what if vitamin D supplements were working with other nutrients? A team of researchers from Harvard, University of Massachusetts, and the Institute for Aging in Boston investigated whether vitamin D supplementation would have any influence on the association between dairy intake and bone density [1]. To do so, they utilized data from the Framingham Osteoporosis Study, an offshoot of the famous Framingham Heart Study. This study included two bone mineral density measurements (taken four years apart) on of the femoral neck (trochanter), lumbar spine, and radius, allowing them to track longitudinal changes in bone mass in more than 600 men and women. The Framingham Study also provided dietary information on the weekly intake of milk, yogurt, cheese, and cream, permitting an analysis of specific dairy foods and bone density.

The study authors hypothesized that the intake of all dairy foods except for cream would be associated with higher bone mineral density and lower bone loss [1]. They further speculated that the benefits of dairy foods on bone health would be greater in those individuals taking vitamin D supplements. They were surprised to find no significant association between dairy intake, quantified as servings per week, and bone mineral density [1]. However, higher intakes of milk, milk + yogurt, and milk+yogurt+cheese were associated with higher bone density in the lumbar spine when they singled out vitamin D users. Moreover, intakes of milk+yogurt+cheese among vitamin D users demonstrated a protective effect against bone loss in the trochanter; for every serving increase of milk+yogurt+cheese per week by vitamin D supplement users (but not non-users), the study identified a 0.23% increase in trochanter bone mineral density [1].

What is it about dairy that brings out the best in vitamin D? Calcium is certainly part of the story. But previous studies that compared bone mass changes from calcium supplementation with those from calcium and vitamin D supplementation found the effects to be indistinguishable [3], suggesting vitamin D had very little, if any, effect when taken solely with calcium. In addition to calcium, dairy foods also provide bioactive proteins that are implicated in bone formation. For example, the protein insulin-like growth factor 1 (IGF-1), a hormone that (as its name suggests) plays a role in bone growth in children and adolescents, is also implicated in adding bone mineral in adults. Moreover, dairy’s casein proteins bind calcium and phosphorus, delivering these two bone-building minerals at the same time. Phosphorus promotes bone mineralization, and thus increases the chances that absorbed calcium will end up in the skeleton. Dairy foods may need sufficient vitamin D to ensure optimal calcium absorption, but the vitamin D needs dairy’s ingredients to be sure that the absorbed calcium is transferred to the skeleton.

Putting It to the Test

The results from the Framingham study indicate vitamin D supplementation may indeed be important for bone health but only when delivered with other nutrients. The next step in vindicating vitamin D will be randomized controlled trials (the gold standard for evaluating the effectiveness of an intervention) that examine specific dairy foods with various levels of vitamin D supplementation. It will also be important to evaluate other, perhaps more relevant, clinical outcomes of osteoporosis besides bone mineral density, such as number of falls or fractures. Here’s hoping that most of us reading this now can reap the rewards of this type of research for better bone health in our future!