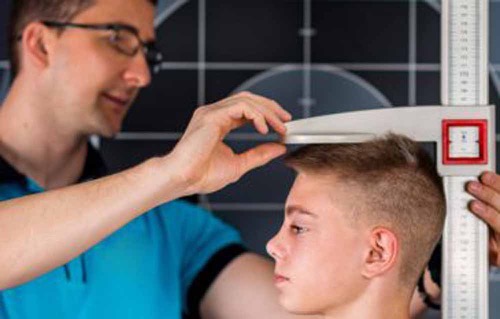 The anthropologist Franz Boas identified the strong influence of environment on human height over one hundred years ago [5]. He noted that children of immigrants to the USA when adults were on average taller than their parents. Boas attributed this observation to better nutrition. Some individuals never reach their full genetic potential for height due to adverse environmental influences such as illness and poor nutrition. Height is, therefore, a sensitive indicator health status.

Human height changes during development from an infant to an adult are easy and cheap to measure. Height is an important indicator of the health of a population and individuals within a population. This is particularly evident in malnourished populations of the developing world that consume insufficient dietary protein and are generally shorter than comparable populations receiving adequate nutrition [5,6]. Indeed, the World Health Organization recommends the widespread use of population-based growth curves covering all ages but particularly infants and children to allow monitoring of the populations by health authorities [7]. Individuals departing from the normal range of these growth curves may signify poor health or poor nutrition, thus indicating the need for medical investigation or nutritional changes. These interventions are particularly important for children as inadequate nutrition or illness early in life can have lifelong consequences [8].

A previous article published in SPLASH!® and authored by Lauren Newmark highlighted the extensive evidence that adequate animal protein in the diet of humans is positively associated with human height and optimal growth [9]. Numerous investigations have shown that cow’s milk is a rich dietary source of protein and essential amino acids. Milk consumption is also positively associated with human height and it promotes optimal growth and development of children [10,11]. Health authorities in many countries, often as part of national health initiates, recommend milk consumption by children.

The Times They Are a Changin’ (Bob Dylan)

Recently, there has been increasing consumption of nondairy alternative milks, particularly plant-based beverages derived from soy, rice, and almonds (summarized in [1]). However, little is known of the health benefits to young children from consumption of these alternative milks. A team of scientists led by Jonathon Maguire and based in Toronto at the University of Toronto, St Michael’s Hospital and the Hospital for Sick Children has now investigated the association between child height and consumption of noncow’s milk [1]. The landmark study was recently published in the American Journal of Clinical Nutrition.

Good experimental design and analysis are essential in scientific research. The Toronto investigators analyzed an impressive data set from over 5,000 children ranging in age from 24 to 72 months [1]. The investigators recruited the children from the TARGetKids Toronto initiative but excluded a small number of children with known health, growth or developmental issues. The dataset contained information on the level of child consumption of cow’s milk and noncow’s milk beverages. About 92% of the group consumed cow’s milk and 13% consumed noncow’s milk, with some children consuming both milks. The investigators used a statistical score of child height for age in their analysis. Importantly, they adjusted their multiple statistical models for known factors that have potential to indirectly affect height. These confounding factors included age, sex, body mass index, maternal ethnicity, income and maternal height. Without consideration of these factors, the investigators would be Walking on the Wild Side (apologies to Lou Reed).

Maguire and colleagues speculated that many noncow’s milk beverages may have reduced protein content compared with cow’s milk, which could explain the height decrease in the group consuming noncow’s milk. Other studies additionally suggest that plant-based milk proteins, unlike animal proteins, often do not contain all the essential amino acids required for optimal human growth and development [12–14]. The investigators further suggested that consumption of noncow’s milk by children may not induce increased levels of a natural growth promotant (insulin-like growth factor 1) as happens with the consumption of cow’s milk.

Limitations of the Investigation

The investigators noted some limitations of their study [1]. First, they could not determine the relative influences of the different types of noncow’s milk beverages. Second, the primary analysis did not include paternal height as a potential confounding factor. However, the investigators performed an analysis of a subset of the whole dataset that additionally included paternal height, but there was no change of the major conclusions. Third, the investigators emphasized that statistical association in a large population study does not necessarily infer causation and therefore they proposed additional research to determine whether noncow’s milk consumption by children caused their reduced height. Fifth, like most good large-scale studies, there is sometimes a minor issue. The dataset included some children that consumed goat’s milk and these children were included in the noncow’s milk group for the analysis. However, the number of these individuals was likely quite small and therefore unlikely to alter the major conclusions.

Long Tall Sally Could Be a Bit Shorter in The Future

The experimental design used by Maguire and colleagues could not test for lifelong effects of consumption of noncow’s milk by children nor whether only height may be affected in the future [1]. At present, these questions are unanswerable due to the very recent changes in the milk consumption habits of some Western countries. The investigators also suggested that some noncow’s milk beverages, unlike commercial cow’s milk, had poorly defined and often variable contents. They suggested that content standardization and content labeling “would help parents make informed choices about the appropriate choice of milk for their children.”

The elephant in the room not addressed by the investigators was the commercial adoption of the word “milk” in the brand name of the plant-based milk substitutes. The European Court of Justice ruled that the word “milk” only applies to dairy products and not to plant-based products. Other countries have similar regulations, although often these are unenforced by the relevant authorities. Resolution of this commercial issue may be required in many countries.