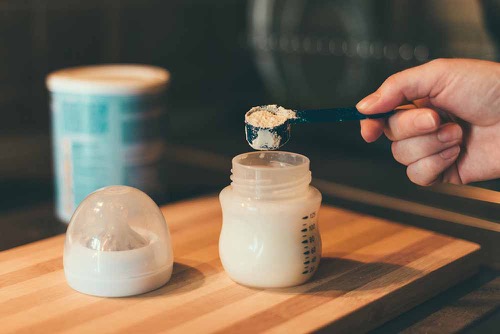 When thinking about infant nutrition, selenium isn’t necessarily the first thing that comes to mind. But it’s been known for more than 50 years that selenium is a crucial micronutrient. This trace mineral can’t be synthesized in the human body, and is required for a variety of functions including antioxidant defense, modulation of the inflammatory response, and production of thyroid hormones [1,2]. It acts in conjunction with many proteins, and about 25 genes encoding these “selenoproteins” have been identified in humans [3–5]. Selenoprotein deficiency has been associated with an increased risk for cardiovascular disease and stroke [2].

Selenium is particularly important for infant health and development. Infants are born with some selenium reserves, and infants born at term usually have larger selenium stores than pre-term infants [6]. Selenium concentrations in preterm infants are considerably lower than those of both formula-fed and breastfed term infants. Preterm infants are at risk for selenium deficiency [7]. Supplementation with trace minerals, including selenium, is particularly important in these infants [8]. But even for infants born at term, selenium stores are quickly depleted as the infants grow, and dietary sources of selenium become increasingly important.

However, infants fed unfortified formulas have consistently lower selenium levels compared with breastfed infants, and their selenium levels decrease several months after birth, suggesting that that their selenium intake may be too low to support their rapid growth [4]. Researchers have thus suggested that infant formula should be supplemented with selenium levels similar to those in human milk [10].

After considering the evidence about the importance of selenium in infant nutrition, in June 2015 the United States Food and Drug Administration (FDA) added it to the list of required nutrients in infant formulas, and required that they contain selenium at levels between 2.0 and 7.0 μg per 100 kilocalories [11].

In a new review article, distinguished professor emeritus Bo Lönnerdal from the University of California at Davis and colleagues suggest that organic forms of selenium may have some benefits over inorganic forms for fortifying formula [12].

Most trials of selenium fortification in infants have used selenite, an inorganic form of selenium. Clinical trials have demonstrated that infants receiving formula fortified with inorganic selenium have improved selenium levels compared with infants receiving non-fortified formula [13–15]. However, the recent review suggests that organically bound forms of selenium—such as selenomethionine and selenium-enriched yeast—are better absorbed and retained than inorganic forms, and fortification with selenium-enriched yeast may be particularly beneficial compared with other organic forms.

Evidence from preclinical studies suggest that inorganic forms of selenium may be more acutely toxic than organic forms, although studies on selenium-fortified infant formulas have reported few adverse effects [13-15]. Several studies have also shown that organic selenium is more efficiently incorporated into milk proteins than inorganic forms, and is more rapidly and extensively absorbed by the body [8,16–20]. In addition, selenium from selenium-enriched yeast may be 1.5–2 times more bioavailable than inorganic selenium, and may also have increased biological activity and be retained longer in the body [20–22].

There may also be differences between various organic forms of selenium. Studies have shown that different forms may have different levels of antioxidant activity, and selenium-enriched yeast may be particularly beneficial [23]. Selenium-enriched yeast is also expected to be safe for use; it is used in inactive form and in tiny quantities, and is closely related to another form of yeast that has been used as a probiotic in children since the 1950s. In addition, a standardized formulation of selenium-enriched yeast in which selenium levels are entirely bound to organic compounds, with no free inorganic selenium present, has been shown to be safe and well tolerated in growing infants and older individuals [21,22,24].

The review concludes that organically bound forms of selenium, and particularly selenium-enriched yeast, are safe and may be preferred for use in infant formulas compared with inorganic forms. However, most studies of selenium fortification in infant formula have so far used inorganic selenium, and the researchers suggest that more studies are needed to evaluate the safety and potential health benefits of enriching formula with organic selenium, and in particular with standardized selenium-enriched yeast.