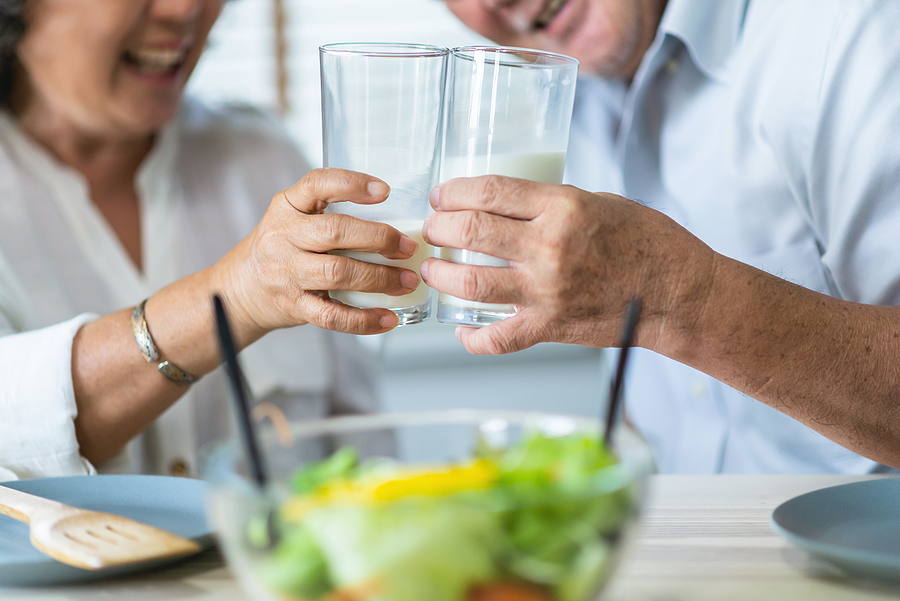 We change in many ways as we grow old. In addition to external signs of aging such as white hair and wrinkles, our body also experiences less obvious changes, such as loss of muscle and bone mass.

These changes to muscle and bone are exacerbated by the fact that older individuals who need institutionalized care are often malnourished and lack adequate protein and calcium. This can in turn contribute to their increased risk of falls and fractures [1-4].

“My work was in aged care because their falls and fracture risk are the highest and their intake is the worst,” says Dr. Sandra Iuliano of the University of Melbourne. “We wondered, can we have good clinical outcomes by just improving the food that they’re eating?” she says.

When designing a nutritional intervention, Iuliano focused on dairy foods as they are a good low-cost source of protein and calcium and can be easily consumed by the elderly. “The reason we chose the dairy food group is because it’s high in calcium and high in protein, and we were looking at falls and fracture reduction, so it was a natural kind of choice for us,” she says. Previous research showed that consumption of milk, yogurt, and cheese, foods rich in calcium and protein, slows bone loss [5,6].

In a new study of 7195 residents of 60 aged-care facilities in Australia conducted over two years, Iuliano found that supplementation using high calcium, high protein dairy foods reduced the risk of falls and fractures [7]. The nutritional intervention was tailored to residents’ preferences and consisted of regular retail milk, yogurt, and cheese incorporated into existing menus. “All we used is milk, yogurt and cheese, any combination, any fat content, and we looked at what the residents were eating and then enhanced what they were eating,” says Iuliano.

Residents in facilities that received the dairy foods intervention maintained their bone and muscle to a greater extent than those in facilities that didn’t receive the intervention. “There was deterioration in bone and muscle that we saw in the controls, but we didn’t see that in the intervention group,” says Iuliano. “That’s probably the beauty of it, because the dairy had both the calcium and the high-quality protein, so we’re doing two things at once with tackling muscle as well as tackling bone,” she says.

There was no difference in all-cause mortality between the intervention and control groups, but the intervention does have the potential to improve quality of life. “They don’t live longer, but they live fracture-free and potentially falls-free,” says Iuliano.

Taking residents’ preferences into account was important for compliance, a key to this kind of public health intervention. “Any intervention is only useful if there’s good compliance, so the food has to taste good, and having foods they know and foods they like was the key,” says Iuliano. “It’s about what residents like, and how we can increase their dairy intake and put good choices in their diet,” she says.

Dairy foods offered a lot of flexibility in how they could be incorporated into the facilities’ menus, with both sweet and savory options. “All day we try to enable choices throughout the whole menu, so that way someone that doesn’t eat breakfast cereal with milk, there’s a choice somewhere else for them,” says Iuliano. “Some places just loved cheese and they just ate cheese a lot, and other places we could fortify milk and that doubled their intake just through the fortification, so it was very tailored to the facility and to the residents,” she says.

The long-term nature of the study bodes well for introducing such interventions as public health policy. “Two years per facility, that’s a long time, and the longevity shows that it can be sustainable,” says Iuliano. “This is showing that this can be easily entrenched into policy and practice,” she says.

Food-based interventions may also be more palatable than therapeutic interventions. “We’re giving them foods that they know but they’re gaining a clinical benefit from it, and it’s like, I’d much rather have a piece of cheese than a tablet if I had to,” she says.

Follow-up studies could combine dairy food interventions with other interventions such as exercise. “We might get an even better effect,” says Iuliano. She also envisions similar interventions working in other parts of the world.