Nursing Can Provide Long-lasting Protection against Worm Infection in Mice 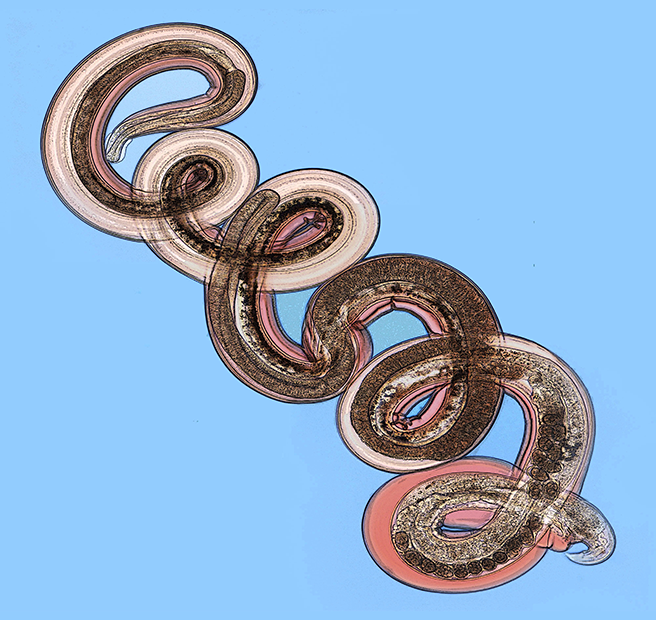 Newborn babies lack a fully developed immune system, and the transfer of maternal antibodies and other immune molecules to babies via nursing is particularly important for early immune protection (1-4). However, it has so far been unclear whether maternal immune transfer might provide long-lasting immune protection that continues beyond when babies are nursing.

A new study led by Professor William Horsnell of the University of Cape Town and the University of Birmingham finds that mothers’ milk can provide long-lasting protection against infection in mice (5). The researchers found that mice infected with a parasitic worm before becoming pregnant were able to confer life-long protection against the worm infection to their infants via nursing.

Infections by various species of parasitic worms, known as helminths, before and during pregnancy are known to have significant consequences for offspring immunity (6-9). “I’ve been working on helminths for about 15 or 16 years now, and I’ve been interested in various sorts of contexts of how an infection influences the immune system,” says Horsnell.

Immune protection against some helminth species is known to be significantly mediated by antibodies (10,11). “We wanted to have a look and see if we get the same thing here,” says Horsnell.

In the new study, immune protection against the helminth Nippostrongylus brasiliensis was not mediated by antibodies but instead by the transfer of maternal immune cells.

Transferring antibody-containing serum from worm-exposed mothers to the offspring of “naïve” mothers—those that were not infected with the worm—did not significantly protect against worm infection compared with receiving serum from naïve mothers. In addition, the researchers found that protection against worm infection was independent of antibody titers in either the pups or mother, suggesting that transfer of maternally-derived antibody is not required to transfer protection against the worm. “There’s the dogma that the immune influence from the mother via nursing is through passive transfer of antibody,” says Horsnell. “That is obviously really important, but there’s a lot more going on,” he says.

The researchers found that even though maternal immune protection was not mediated by antibodies, it was dependent on maternal B cells, which are the cells that produce antibodies. “We haven’t quite answered what they’re doing there, but the big thing was that it was the cell transfer that appears to be mediating the long-term effects,” says Horsnell.

The maternal transfer of immunity via nursing was also sufficient to protect mice with a genetic immune susceptibility to infection. “One of the things we found that immediately surprised us was that the effects can reverse primary immune deficiency,” says Horsnell. “We’ve got these mice that are inherently susceptible to worm infections and if we nurse them on a mother who’s had an infection, it would confer that protection,” he says.

“The other thing that surprised us was that the effect was completely driven by nursing, and there was no in utero effect,” says Horsnell. When naïve pups of one mouse strain were nursed by worm-exposed mothers of a different mouse strain, the nursing alone was sufficient to significantly protect the pups from worm infection. This experiment also indicated that transferred immune cells from one mouse strain were able to affect the immunity of a different strain. “We also found that it occurred in an allogeneic setting, where the cells get transferred into a setting where they’re likely to get rejected, but that’s sufficient to still imprint on the offspring’s immune system,” he says.

It’s still unclear how applicable the results would be to humans, but that’s something Horsnell is beginning to look at. “That’s the killer question, and now that we’re starting to do a lot of this work with allogeneic models, that’s important because that’s a representative system,” says Horsnell. “How important it is in humans we don’t know, but it is something that we have to consider and we need to think about how we can test it,” says Horsnell. “We’ve just applied with collaborators for funding for a cohort study to look specifically at parasite infections in maternal and offspring cells, and hopefully then we can start to see if what we’re seeing does happen in humans,” he says.

The results pave the way for many follow-up studies. “It’s just one of these papers that’s opened up so many questions, and we’re trying to see which ones we can answer next,” says Horsnell.

Future studies could look at maternal immune transfer after infection with other pathogens. “What this might be suggesting is that everything that we know in the context of direct infection has got a transgenerational potential,” says Horsnell. “We also want to see if there’s any effect of breastfeeding inherently,” he says. “So even if the mother hasn’t had a specific immune challenge or an infection, what is the effect of just breastfeeding on the offspring’s immunity?”

Horsnell is also looking at how the results could influence maternal vaccination strategies. “Vaccine effects are all framed in the context of passive antibody transfer, and we just don’t believe that it’s as simple as that anymore,” he says. The fact that maternal exposure to an infection before pregnancy can lead to a mother transferring long-term immune benefits to her offspring could potentially have important applications.