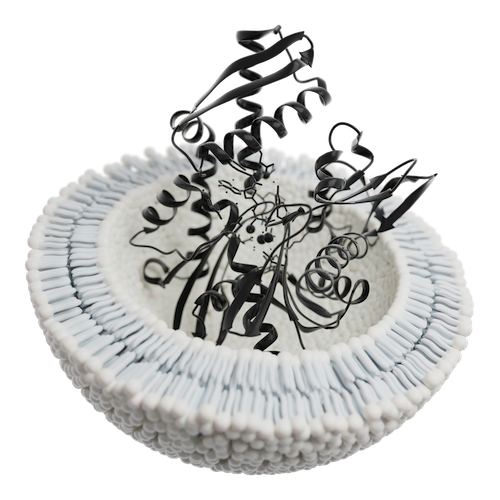 Dairy could a have a surprising new role to play in biomedicine and pharmacology. Over the past few years, researchers have shown a surging interest in exosomes [1–3], tiny membrane-bound vesicles that carry molecules from cell to cell. Scientists are hopeful that these cellular bubbles could serve as the ideal drug delivery vehicle. In a new paper, researchers have described an improved method for distilling an impressive number of exosomes from a cheap and widely available product—cow’s milk [4].

“Imagine instead of getting a vaccine shot, your nurse hands you a milkshake,” says Rob Gourdie, a biomedical researcher at the Virginia Polytechnic Institute, when describing the myriad medical possibilities with exosomes as a drug courier. “Another milkshake may contain exosomes loaded with a therapeutic peptide designed to protect internal organs such as the heart from myocardial infarction.”

Exosomes are a type of extracellular vesicle that regularly bleb off cell membranes in most animal cells. These lipid-bound packages, between 50 and 150 nanometers in diameter, ferry particles such as lipids, proteins, and nucleotides between cells [5]. Until relatively recently, scientists didn’t pay much regard to this cellular packaging, but in 2007, these vesicles were discovered to transfer genetic material that alters gene expression in cells [6]. That’s when biomedical researchers began to realize the potential of exosomes in drug delivery; the vesicles can be ingested and survive in vivo, and they are able to pass the blood-brain barrier, a protective barrier that prevents pathogens or unwanted chemicals from entering the brain [7]. Although the blood-brain barrier has a critical function in protecting the organ, it has posed a serial challenge for pharmacologists trying to deliver medication to the brain.

Body fluids such as blood, lymphatic fluid, urine, and milk contain abundant supplies of exosomes, but distilling exosomes from dairy milk has a few challenges [8]. “Exosomes are abundant in cow’s milk, yet they’re difficult to isolate from other milk proteins and lipids,” says Gourdie.

Prior to the new method described in the journal Nanotheranostics, exosomes were largely extracted from milk using a method called ultracentrifugation [4]. Essentially, the multi-step process involves spinning small volumes of a solution in a centrifuge for long periods of time, which makes larger molecules sink to the bottom of the solution. However, this process faces two main challenges—milk proteins called caseins form blobs that are very difficult to separate from the exosomes, which contaminates the purity of the exosome solution; and the centrifugation process is difficult to scale up, as only small quantities of milk can be centrifuged at a time [4].

Through trial-and-error, Gourdie and his research team greatly improved upon the distillation methods already in use. Most notably, they added a novel step called chelation that uses positively charged calcium ions to solubilize caseins and other contaminating proteins. In the ultracentrifugation method of extracting exosomes, this improved method yielded roughly 75 milligrams of exosome concentrate for every liter of dairy milk, or a 7.5% return from the starting volume [4].

Although adding a chelation step was able to clean out the pesky proteins, the scalability problem still remained. That’s why a chelation step was also added to a different exosome extraction method called tangential flow filtration (TFF), which works more like a molecular sieve to filter out particles of a desired size. A new and improved TFF method gave 12.5% exosome extract return from starting volume, or roughly a cup of exosomes for every gallon of milk [4]. “For the first time, we’ve charted a path toward the industrial scalability of exosome purification for oral drug delivery,” says Gourdie about the TFF chelation method.

“What’s remarkable is the quantity of extracellular vesicles they are able to produce,” says Joy Wolfram, a biomedical researcher at Mayo Clinic who was not involved in the study. “Isolating and manufacturing extracellular vesicles in a scalable manner has always prevented their translation into the clinic, but this paper shows a path to overcome those roadblocks.”

The new dairy exosome purification process could serve to be one key step in a budding branch of pharmacology.