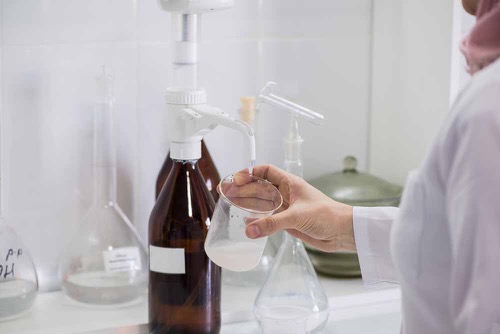 A current trend in the marketing of healthy foods and drinks is highlighting a product’s short ingredient list; the less “stuff” in a food, the healthier it must be, right? This may be true for energy bars or fruit juices, but when it comes to human milk, a long list of ingredients is precisely what makes it optimal for infant health. Over the last decade, as the health food aisle has increased in so-called simple and clean foods, human milk’s ingredient list just keeps getting more complicated. Innovations in analytical tools have led to more in-depth studies detailing the specific types of fats, amino acids, sugars, and other metabolites present in human milk. Creating milk “–omes”—specifically, the milk metabolome, glycome, and lipidome—complicates human milk research in the best possible way, opening the door to identifying specific milk components that influence infant growth and development.

The most recent application of milk “-omics” comes from a team of French researchers investigating milk composition and growth in preterm infants [1]. Specifically, they wanted to find out if there was a milk phenotype—or signature list of ingredients—that was associated with faster growth rates among infants born between 27 and 34 weeks gestational age.

Preterm infant growth patterns are variable, even among those infants receiving protein-fortified human milk, indicating that factors other than total protein or calories may influence weight gain [Using an “-omics” approach offered the potential to identify metabolites or other bioactive compounds in human milk associated with optimal early growth among preterm infants.

The study population of 26 infants was drawn from a larger prospective study of 138 infants, each of whom received their mother’s breast milk for a minimum of 28 days. Each infant was ranked based on their change of weight Z-score, a statistical tool that represents an infant’s weight change relative to the mean weight change across the study population. Out of this initial group of 138 infants, the 11 infants with the highest weight change Z-scores made up the faster growth group and the 15 infants with the lowest weight change Z-scores were the slower growth group. Each infant had three associated milk samples; mothers provided 24-hour breast milk samples (manually collected) during the second, third, and fourth week post-partum, each sample considered representative of that week of lactation.

Now comes the complicated part of the study design—comparing the data on milk composition between the two groups. When comparing classic milk constituents like protein, fat, lactose, and calcium, there might be only a handful of data points for each milk sample. In contrast, data generated by analyzing each sample’s metabolome (all of the small molecules in milk), lipidome (all of the fats in milk), glycome (all of the sugars in milk), and free-amino acid profiles results in thousands of data points. To help separate the wheat from the chaff, the team utilized statistical methods that selected the particular constituents that created a clear separation between the faster and slower growth groups, all while controlling for potentially confounding variables (e.g., maternal age, infant birth weight).

BCAA aren’t the only component influencing muscle protein synthesis in faster growing infants. Higher concentrations of the amino acid arginine are an additional molecular signal for initiating protein synthesis in muscle tissue. Moreover, the researchers propose that arginine also confers protective benefits to the mucosal lining of the infant’s intestines. Higher concentrations of this amino acid could play a role in the possible prevention of necrotizing enterocolitis, a common disease among premature infants and a major cause of morbidity and mortality in the NICU [1].

Arginine was actually one of a handful of milk ingredients that demonstrated a strong ability to predict weight gain from birth until discharge across the study population [1]. That is, the concentration of arginine in milk could reliably tell researchers how much weight an infant would gain during their stay in the NICU. Other significant predictive biomarkers included tyrosine (a precursor of thyroxine, a hormone involved in energy metabolism), beta-hydroxyburtyrate (a ketone body implicated in protein translation and the modulation of inflammation), niacinamide (a form of niacin, a B3 vitamin that influences fatty acid metabolism and energy production), choline (which enhances the liver’s production of glycogen, a backup energy source), and lacto-N-fucopentaose I (a human milk oligosaccharide that supports the growth of a healthy gut microbiome) [1].

Looking at only milk macronutrients would have led to the conclusion that optimal preterm growth was the result of higher energy milk. But the findings from this study’s comprehensive “–omics” approach—the most comprehensive picture of preterm milk to date—suggests that total milk energy is only one part of a much more complicated and fascinating story: milk producing faster growth had energy provided in a more digestible form for naïve digestive tracts, higher concentrations of amino acids that promoted protein synthesis and muscle growth, and bioactive molecules that influenced energy homeostasis and intestinal health [1].

The study authors readily admit that, because of the small sample size, their findings are best framed as testable hypotheses about milk composition and preterm infant growth. But if these results are validated in a larger study, they offer the potential of using human milk to improve the growth and long-term outcomes of premature infants.