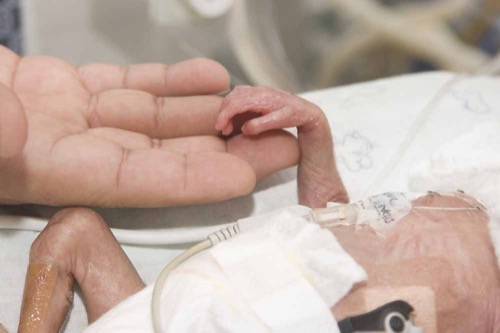 The placenta and the mammary gland may be separate organs, but they are better viewed as part of a coordinated team, charged with transferring nutrients, immune factors, and other bioactive components to the developing offspring. The placenta manages the first 40 weeks, but if the baby is born prematurely (<37 weeks gestation), the mammary gland works overtime to produce milk with higher concentrations of components that should have come from the placenta.

But does the mammary gland always cover for the placenta? Babies born at term, but born small for gestational age (SGA; birth weight<10th percentile), have also missed out on placental nutrients, similar to premature neonates. Do these mothers produce milk that compensates for what their babies may have missed in utero? A new study by Bobinski et al. (2013) suggests that milk composition may be strongly shaped by both the gestational age and weight of the neonate.

During the last trimester, the placenta transfers higher concentrations of DHA (per kilogram of fetal body weight) than at any other time during gestation. Infants born prematurely are cut off from placental transfer of this essential fatty acid. However, numerous studies have demonstrated higher concentrations of DHA in milk from mothers of premature as compared to mothers of term infants (reviewed in Bokor et al., 2007). In addition, several studies have found higher concentrations of several other types of omega-3 fatty acids (e.g., alpha-linoleic acid, or ALA), which can be used by the infant to synthesize DHA (Bitman et al., 1983; Bokor et al., 2007).

Despite higher postnatal LCPUFA requirements of infants born prematurely, not all investigations have found higher milk LCPUFA in preterm as compared to term milk (e.g., Genzel-Boroviczeny et al., 1997) Interestingly, these studies highlight the higher concentration of medium chain fatty acids (fatty acids with 6-12 carbons) in premature milk, arguing they are easily digestible fats that could serve as an important energy source (Bitman et al., 1983; Genzel-Boroviczeny et al., 1997). Although contradictory in their findings about LCPUFA, taken together these studies all suggest compensatory mechanisms during lactation that are responsive to specific needs of the premature compared to the term neonate.

Not only does the mammary gland compensate for placental shortcomings when it comes to the timing of parturition, it also is responsive when babies have had insufficient placental transfer of nutrients throughout gestation. Bobinski et al. (2013) are the first to investigate how pathological processes that occur during pregnancy (i.e., intrauterine growth restriction resulting in SGA neonates) influence the mother’s milk fatty acid composition. To do so, they analyzed transitional milk (days 4-7 of lactation) and mature milk (month two of lactation) from mothers who gave birth to neonates differing in birth weights and gestational age. Specifically, they compared milk from mothers that delivered (1) late preterm (35 – 37 weeks gestation), (2) at term, appropriate weight for gestational age (AGA), and (3) at term, SGA. Both late preterm and SGA neonates have small birth weights, but they do not necessarily have identical nutritional deficits. As a result, the study authors did not predict convergence in milk composition from these two groups but rather hypothesized that both would show important differences from mothers of AGA neonates, differences related to their specific nutritional deficits.

No significant differences were identified in the relative proportion of any of the 34 fatty acids they measured in transitional milk samples among the three groups of mothers. However, mature milk samples collected from late preterm and SGA mothers two months later were significantly higher in medium chain fatty acids compared to milk from AGA mothers. Like previous researchers, Bobinski et al. highlight the importance of medium chain fatty acids such as capric acid (10:0) and lauric acid (12:0) as important energy sources for neonates. In addition to providing calories, these fatty acids require less ATP (adenosine triphosphate) for digestion, thus making more of this energy molecule available for other cellular processes. Increased capric and lauric acid may thus be seen as a compensatory mechanism for both preterm and SGA neonates. Although it may not be filling a nutritional deficit (as was the case for more DHA in preterm neonates), the presence of higher concentrations of these fatty acids in milk lipids may permit the partitioning of digestive energy to cellular proliferation (i.e., body growth) and development.

The authors are not able to explain why this important difference is seen in mature but not transitional milk, as one might predict that such compensatory actions would be critical from the start of lactation. They speculate that it may take longer than the first week of lactation for the mother to modulate the synthesis of milk to the specific needs of her offspring. However, without any milk samples collected between day seven and the second month of lactation, it is not possible to say when these changes between AGA and the other two groups of mothers emerge.

Although primarily focused on medium chain fatty acids, this study did have an interesting finding concerning omega-3 LCPUFA. When looking at changes in proportions from transitional (day 7) to mature milk (month two), milk from mothers delivering preterm decreased in omega-3 LCPUFA (including DHA) while that from AGA and SGA mothers showed no statistically significant changes. This suggests different metabolism of these fatty acids in mothers that deliver preterm compared to term, regardless of offspring body size, and serves to further highlight the potentially intimate relationship between infant condition and milk fatty acid profiles.

The results of Bobinski et al.’s study support previous findings of a link between premature birth and the synthesis of omega-3 LCPUFA, such as DHA, and medium chain fatty acids, but they also provide new data suggesting milk fatty acid composition is modified in mothers that give birth to SGA offspring as well. Milk production, in their view, is not static but rather highly responsive to specific needs of the neonate, most likely facilitated by hormonal communication from the placenta during pregnancy and parturition.

This adaptive explanation is not new, and also is not without its critics. Many have offered nonadaptive explanations for the differences in milk fatty acid concentrations observed in preterm and term milk. For example, Bokor et al. (2007) argue that mothers that deliver prematurely may simply have larger body stores of LCPUFA than term mothers (because they didn’t lose them during the last weeks of gestation) and therefore have more available for mobilization during lactation. The mammary gland, in this scenario, is not responding to specific infant needs but rather to maternal physiology.

The differences in medium chain fatty acids are more difficult to explain than LCPUFA, because they can be synthesized by the mammary gland rather than transferred only from adipose stores. However, even the concentration of capric and lauric acid are dependent upon maternal diet, including consumption of saturated fats, unsaturated fats, and even carbohydrates.

An important next step is replicating Bobinski et al.’s results in larger sample sizes (their study had 23 mothers with SGA offspring). Future studies should also control for parity. Bobinski et al. enrolled first-time mothers as well as mothers with up to two previous offspring but failed to control for this potentially confounding variable. Previous research (Finlay et al., 1985) suggests that parity may influence both total milk fat (negative correlation) and the proportion of fatty acids synthesized by the mammary gland (i.e., medium chain fatty acids)(positive correlation). This means that with increased parity, milk is generally lower in fat and that fat contains a higher proportion of medium chain fatty acids. Mammary glands that have previously lactated respond differently to placental hormones and enzymes than do immature mammary glands, and may preferentially secrete medium chain fatty acids over LCPUFA (Finlay et al., 1985). As these are the two groups of fatty acids of interest when looking at milk for preterm and SGA neonates, it certainly is important to consider how this variable may influence study results.

Formulations of the future

Although mother’s milk is best for the developing infant, many preterm and SGA neonates will require supplementation. A better understanding of the relationship between infant condition and milk synthesis will enable the production of formulas that also help compensate for nutritional deficiencies experienced during gestation. Research of this type is critical as even small dietary changes during the first months postpartum can improve growth and developmental outcomes for these high-risk neonates.