Monkey Model of Milk and Lactation 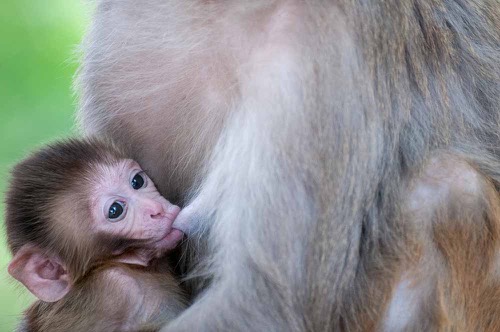 Like humans, monkeys generally give birth to one baby at a time and nurse them for extended periods during a time of infant and toddler-like development. Primates need this extended lactation period for social development. Just as humans need to learn interpersonal and societal rules, monkeys also need to learn how to find food and not kill each other. Thus, monkeys, like humans, produce a dilute milk to feed slow-growing young.

To date rhesus monkey milk composition has been studied in hundreds of animals in multiple captive populations at research centers. Rhesus milk is slightly more energetically dense than human milk, but much less concentrated than milk from many other mammals (Hinde and Milligan 2011; Skibiel et al. 2013). Depending on timing during lactation, it is ~4–6% fat, 2% protein and ~7.5% carbohydrates. Other constituents, including minerals, oligosaccharides, fatty acids, bacteria and hormones, have been systematically investigated (Lönnerdal et al., 1984; Milligan and Bazinet, 2008; Osthoff et al., 2009; Goto et al., 2010; Jin et al., 2011; Sullivan et al., 2011; Tao et al., 2011; O’Sullivan et al., 2013; Hinde et al., 2013). In this way the “food” and “signal” aspects of milk (nutritive and signaling constituents) have been targeted for ongoing work. However, the “medicine” of milk—the immunofactors that protect and train the infant’s developing immune system—have received relatively less effort.

Milk composition is not static among individuals, or even in the same individual. Studies in monkeys point to some sources of this variation. Let’s use the total amount of milk fat produced as an example. Total milk fat varies by maternal body mass and parity (Hinde et al., 2009). Moreover the percentage of fat in milk produced for sons is much higher than in milk produced for daughters (Hinde, 2007a). Other less obvious factors can also influence milk fat. Monkey mothers with higher intestinal parasite loads produce lower fat concentrations in milk (Hinde, 2007b)! These inter-individual differences emerge even though animals consume a standardized diet. New tools will allow us to unpack rhesus macaque milk in new ways, in order to understand the causes of variation in milk composition and production.

Why Work with Monkeys

To tease out the environmental contributors to lactation, the monkey model enables the study of primate lactation physiology, in the absence of human cultural contexts. Monkeys in an outdoor breeding colony are all fed the same diets and live in the same environment. Human diets can’t be easily controlled. The use of infant formula, scheduled feedings and pumping, clinical recommendations, and well-intentioned relatives, friends, and strangers influencing infant feeding decisions are absent in rhesus monkeys. With monkeys, we can study the biological variation in mother’s milk, the sources of that variation, and the consequences for infant development.

On the flip side, monkeys are extremely costly to study, compared with rodents (Neville et al., 2012). They live longer lives, breed more slowly, and require more expensive food, housing, and medical care. Monkeys in an outdoor breeding colony also live in social groups and naturally experience higher or lower social rank, as they would in the wild. These variable life-stressors that could affect milk production can be observed, but are difficult to control. Thus, it is important to be aware of these factors when designing primate studies. But these costly aspects are precisely why monkeys are so valuable; rich social lives and complex behavioral dynamics more closely resemble those of humans.

New Tools for the Study of Monkey Milk

Unlike cows, monkeys produce small amounts of milk and haven’t been studied extensively. New tools bring state-of-the-art ‘omics techniques to extract large data sets from small volumes of monkey milk. Most recently, we demonstrated that RNA extracted from milk fractions is representative of RNA extracted from mammary tissue (Lemay et al., 2013). No biopsies needed! Just milk. This study also revealed sufficient similarities between the human and macaque transcriptome of milk-producing cells to further legitimize the macaque as an animal model of human lactation (Lemay et al., 2013). The monkey model has been further legitimized for microbial and metabolomics research. Milk microbes are similar in human and rhesus milk (O’Sullivan et al., 2013). Likewise, human and monkeys share a common set of metabolites in their urine and serum (O’Sullivan et al., 2013).

Other tools have been developed to identify scarce, but important, constituents of milk in studies involving monkeys. Researchers have standardized methods for hormonally inducing lactation in rhesus macaques, and for tracking viral loads and antiviral constituents of milk (Permar et al., 2008). Such tools then tracked the transmission of HIV from mother to offspring via milk (Fouda et al., 2013). Researchers can even use barium levels in teeth—yes, teeth—to determine when an extinct mammal was weaned (Austin et al., 2013). These new tools enable researchers to “see” the previously unobservable in milk.

The most exciting research occurs at the intersections among disciplines. As such, 21st century science will require expanding networks of researchers. Many of the studies described above involved interdisciplinary collaborations among anthropologists, biochemists, microbiologists, food scientists, animal scientists, evolutionary biologists and psychologists. Moreover many of the samples analyzed in the above studies were made available via the Archive of Rhesus Macaque Milk Samples (ARMMS) Program. Since being established in 2005, we have collected and archived milk samples from nearly 300 rhesus macaques, often repeatedly across lactation, totaling >10,000 mL of milk. To maximize the knowledge that can be gained from this archive in consideration of the three principles of animal research—Replacement, Reduction and Refinement (three “Rs”)—these milk samples, paired with detailed behavioral and morphometric data on monkey mothers and infants, are available for colleagues to assay for bioactive components that contribute to infant growth, development and health.

What is the complete catalog of everything in milk? What are the genetic and environmental sources of variation in these milk constituents? What are the physical, intestinal, microbiological, neurobiological and behavioral developmental effects of milk on the consumer? We have an archive of precious samples, the tools to probe the samples and the research questions. Now we just need the funding. (Hint Hint).

Hinde K (2007b). Milk composition varies in relation to the presence and abundance of Balantidium coli in the mother in captive rhesus macaques (Macaca mulatta). Am J Primatol 69:625-634.