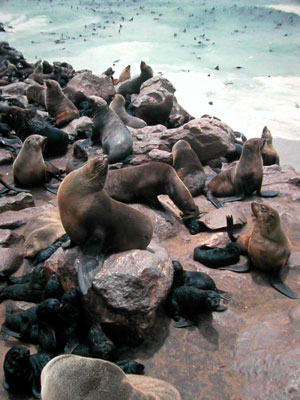 Dairy farmers everywhere would rejoice if scientists discovered a way to breed cows that continually produce milk. The answer to this biological riddle may lie in the study of other milk-producing animals.

Weird animals produce milk with various lactation strategies. Some produce all of their milk in just a couple days while others produce milk over five years. Some produce copious amounts of milk for a couple days and then not again for several weeks. By comparing the lactation strategies of different animals, researchers can identify exciting new methods of milk production.

The increasing availability of sequenced genomes and the opportunity to rapidly compare data between species provide new opportunities to better understand the bovine lactation cycle. Studying animals with lactation strategies different from cows or humans enables researchers to more easily identify mechanisms that regulate lactation and identify new milk bioactives that are not as readily apparent in cows and humans.

The monotremes (egg-laying mammals) split into mammalian phylogeny approximately 200 million years ago (Lefevre et al., 2010) and include the platypus (Ornithorhynchus anatinus) and echidna (Tachyglossus and Zaglosus genera), both of which are still found in Australia. The monotremes can be considered the first mammals and have a sophisticated lactation strategy. Both the platypus and echidna lay an egg that is incubated until hatching. After the egg hatches, the mother then initiates lactation to feed her very immature (embryo-like) young. Therefore, the milk must meet all of the requirements to provide nutrition and signalling factors for development of an immature young.

Could monotremes be birds? This is a provocative question, and there is an interesting relationship between monotreme lactation and nutrient provision in some species of birds. Recent work has suggested that the sex chromosomes of platypus are more like that seen in birds than mammals. Interestingly, some birds, such as the pigeon, produce an essential nutrient substance in the crop sac (located next to the oesophagus) that is fed to their young and seems to be functionally similar to mammalian milk. The “lactation cycle” of the crop sac includes a growth phase during egg incubation, the onset of “milk” production at hatching, and sustained delivery of milk to the squab during the first five to 10 days. Prolactin, a hormone that is central to milk synthesis in mammals, also controls growth and function of the crop sac. Pigeon milk is similar to mammalian milk in that it contains protein, carbohydrate, lipids, vitamins, minerals, and growth factors. In addition, it includes antimicrobial proteins and other innate and adaptive immune factors that play a role in the development of their immune and digestive systems. When the squab is weaned, it begins to eat seeds, consumes crop milk less frequently, and the crop involutes and remodels in preparation for the next cycle. A recent study examined the transcriptome (all the genes expressed) of the pigeon crop (Gillespie et al., 2013) during the lactation cycle, and there was no evidence of expression of mammalian milk protein genes during lactation. However, the mechanism is an interesting example of evolutionary convergence to provide essential nutrients, protection from infection, and signalling for development of the young.

Marsupials produce different kinds of milk at the same time

The marsupial, which evolved about 150 million years ago, has a similar reproductive strategy to monotremes. They have a short gestation and give birth to an immature young, basically an exposed fetus. Lactation is very long relative to gestation and the mother progressively changes the composition of the milk nutrients and bioactives. This is necessary to signal the growth and development of the young. If a pouch young is transferred to a mother at a more advanced stage of lactation than its own mother, the suckled young grows faster and organ development can be accelerated.

Interestingly, the tammar can practise concurrent asynchronous lactation. The mother provides dilute milk for the neonate in the pouch and a more concentrated milk with a completely different composition from an adjacent mammary gland. This concentrated milk is produced for a larger young that has exited the pouch and is at heel. Both of the mammary glands are exposed to the same hormones and growth factors in the circulating blood suggesting milk composition and production can be controlled by a local mechanism in the mammary gland.

In contrast to the postnatal development of marsupial young, eutherians, such as the cow and human, have a long gestation and a relatively short period of lactation, and the composition of the milk does not change appreciably after secretion of the initial colostrum.

Fur seals can stop producing milk and start again, without another birth

Usually when milking ceases or the young no longer suckles from the mother, the mammary gland stops producing milk and the structure of the mammary gland reverts to that seen before pregnancy. However, some species of fur seals give birth to their young on land, suckle the pup for a few days, and then the lactating mother forages for food in the ocean for up to four weeks. The pup remains on land and is fed for about three days when the mother returns from her foraging trip. In contrast to cows, the lactating seal can downregulate lactation while offshore and then resume milk synthesis and secretion after returning to shore to feed the young. Furthermore, each time the mother returns to feed the young, she increases milk production relative to her previous visit. Understanding how the seal regulates her mammary gland during this cycle may offer new promise for strategies to implement “once-a-day” milking of dairy cattle without loss of milk production.

Lessons for the dairy industry

Recent studies have shown the mammary gland of the fur seal is like a protein pump – it doesn’t synthesize significant amounts of lipid and carbohydrate. Moreover, milk protein content of fur seals (10-20%) is more than double that of cow milk (3.0-4.5%). Therefore, this species may provide us with a clearer understanding of the genes regulating synthesis of milk proteins. A recent comparison of microarray analysis of mammary tissues (a snapshot of all the genes expressed in the mammary gland) from the offshore and onshore lactating Cape fur seal (Artocephalus pusillus pusillus) and the tammar wallaby and cow during early and late lactation (when we see increased milk protein production) identified the central role of folate in milk protein synthesis in mammary epithelial cells (Menzies et al., 2009). This analysis could now be enhanced with the considerably improved sequence data from new genomes appearing in publicly-available databases. This kind of approach will continue to provide opportunities to better understand the comparative genomics of the lactation cycle and to service the dairy industry.

During lactation, cows gradually produce less milk and must become pregnant again to renew their milk supply. If it were possible to increase bovine milk production without a new pregnancy, like the fur seal does, the efficiency of milk production would be dramatically increased with a smaller environmental footprint. The greatest future innovations for the dairy industry may well result from the study of animals with unusual lactation strategies.