How Milk’s Metabolic Footprint Changes After Fermentation Into Yogurt 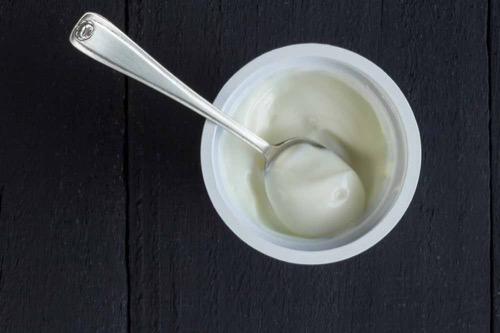 Fermentation is an age-old practice used to make foods last longer and easier to digest. About 40–80 pounds of fermented dairy products are consumed per person each year in Western countries, of which yogurt constitutes about 40% [1,2].

Yogurt consumption is known to have several beneficial effects, including modulating the immune system, lowering circulating cholesterol, and improving many gastrointestinal conditions such as lactose intolerance, constipation, and inflammatory bowel disease [3-5]. However, the mechanisms underlying these beneficial effects are still unclear.

In a new study, Grégory Pimentel of Agroscope and his colleagues set out to explore the mechanisms underlying the health benefits of yogurt [6]. The researchers used mass spectrometry-based methods to characterize the metabolic footprint of both milk and yogurt. They also assessed how acute or short-term intake of milk and yogurt by healthy adults influenced the assortment of small molecule metabolites, known as the metabolome, present in their blood. They found that the milk metabolome becomes more complex during fermentation into yogurt, and metabolic pathways related to amino acids, bile acids, and a class of biologically important molecules known as indole derivatives are modulated by yogurt intake.

Fermentation is known to cause major changes to a food’s composition and nutritional value. Lactic acid bacteria, which play a particularly important role in the fermentation of milk to yogurt, may contribute to the reported health benefits of yogurt both through the release of bioactive metabolites and the modulation of the host intestinal microbiota [7-10].

Few studies have used metabolomics—or the study of the metabolites present in a cell or substance—to investigate fermented dairy intake [11-15]. Metabolomics studies of the milk fermentation process have identified free amino acids, peptides, and volatile compounds as some of the metabolites released in yogurt, cheese, and various fermented milks [16-19].

The new study evaluated the metabolic response of 14 healthy men to the ingestion of probiotic yogurt or nonfermented milk [10]. The nonfermented milk control was chemically acidified to endow it with a similar color, texture, and pH as mild, semiliquid yogurt. Participants ingested a single 800-gram dose of either milk or yogurt within 15 minutes, and their serum—the clear part of the blood left after removal of blood cells and clotting factors—was then sampled up to 6 hours later to evaluate the effects of acute intake on the metabolites present. To evaluate the effect of short-term intake on the serum metabolome, participants consumed 400 grams of either milk or yogurt daily during a two-week test phase, and serum samples were taken from fasting participants at the end of the two weeks.

The researchers found that milk and yogurt share a lot of their metabolites, but their analysis identified clear differences between the two metabolomes. Yogurt had a higher number of metabolites compared with milk, which wasn’t a surprise as the process of fermentation is expected to release new metabolites.

Acute intake of either milk or yogurt resulted in two different metabolic profiles. Two weeks of daily milk or yogurt intake also resulted in two different metabolic profiles, although the differences were less marked than after acute intake. The researchers conclude that there are clear differences in the effects of milk and yogurt on the serum metabolome after both acute and short-term intake.

The researchers also noticed that about a third of all the metabolite changes observed after two weeks were already present within 6 hours of milk or yogurt intake. They suggest that identifying the metabolic changes that occur after acute intake could help predict the changes that are likely to occur after chronic intake.

Yogurt intake also reduced concentrations of five bile acids, and these were some of the major differentiators between the effects of milk and yogurt intake. However, their presence appeared to be short-lived, as there was no difference in fasting serum after two weeks of daily intake. Bile acids are known to be influenced by the intestinal microbiota, suggesting that differences in the effects of yogurt or milk on intestinal microbiota could explain differences in the concentrations of bile acids [20].

Yogurt intake modulated four additional compounds: indole-3-lactic acid (ILA), indole-3-acetaldehyde (IAAld), indole-3-acetic acid (IAA), and 3-indole propionic acid (IPA). These compounds are part of a biologically and pharmacologically important class of molecules called indole derivatives. ILA and IAAld clearly differentiated yogurt intake from milk intake, and were present at a higher concentration in yogurt compared with milk as well as at a higher concentration in serum after yogurt intake. IPA and IAA were not detected in either milk or yogurt but were present in serum. Indole compounds are known to be produced by microbial metabolism, and the researchers suggest that their presence in serum could originate from intestinal microbiota.

Indole derivatives appear to play a role in the functioning of the gut epithelial barrier and in gut inflammatory homeostasis. IAA and IAAld are ligands for the aryl hydrocarbon receptor (AhR), and they may influence the gut through the AhR signaling pathway [21-24]. Interestingly, the researchers found that the gene coding for AhR was one of the top genes that significantly changed after yogurt intake [25].

The researchers suggest that follow-up studies could investigate the metabolites identified in greater detail. For instance, studies could examine whether the modulation of bile acids or the AhR signaling pathway contribute to the beneficial effects of yogurt. Identifying the molecular targets modulated by these metabolites could also help elucidate the underlying mechanisms of these beneficial effects.

The researchers conclude that milk and yogurt each has an identifiably different metabolic footprint, and milk and yogurt intake have clearly different effects on both the acute and short-term serum metabolome. The researchers also found that metabolic pathways related to amino acids, indole derivatives, and bile acids are modulated in healthy men by the intake of yogurt. This indicates that fermented dairy products may help regulate metabolic activity, and the researchers suggest that more studies of the beneficial health effects of fermented dairy products are needed.