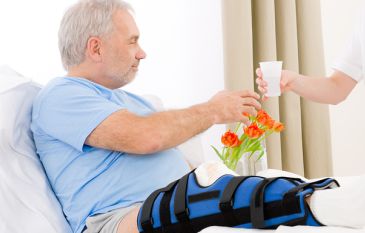 They say time heals all wounds. But can milk help those wounds heal faster? Noting milk’s ability to stimulate and support the development of an infant’s immune system, researchers posed the simple, but elegant, hypothesis that milk could accelerate the healing process by enhancing the body’s immune response. A growing body of studies with animal models provides strong support. From lesions of the corneal epithelium to lacerations of the skin, milk-treated groups healed faster than controls, and milk helped slow-healing diabetics match their healthy peers [1-5]. Importantly, these differences can’t be chalked up to just nutrition. Blood samples from groups supplemented with milk (or milk-derived proteins) had significant changes in immunologically active molecules implicated in wound healing. Milk’s ingredients influenced the way their immune system operated—for the better. Milk may be a beverage, but it clearly shows great promise as medicine.

Skin is the body’s largest organ, and it is also an integral part of the immune system. Skin keeps the outside, and all of its potential pathogens, out. The same is true for the epithelial lining of the eyes, mouth, and all other potential portals that antigens can breach. These surfaces constitute our best defense against the germs of the outside world. Anything that compromises their ability to do their job has to be dealt with immediately.

From a small paper cut on the thumb to a major laceration of the leg, the healing process is the same: inflammation, proliferation, and remodeling. Inflammation usually has a negative connotation when it comes to human physiology, but it is a necessary and critical first step in wound repair. Immediately after injury, the immune system sends white blood cells to clear the denuded area of potential pathogens, such as bacteria. These same white blood cells also are responsible for releasing chemical messengers, called cytokines, to orchestrate the inflammatory and subsequent phases of wound repair. Some of these cytokines are referred to as pro-inflammatory because they help orchestrate the inflammatory response. Others are anti-inflammatory, helping to ensure the inflammatory phase comes to an end.

Following inflammation, epidermal cells migrate to the wound site and undergo rapid mitosis to replace the damaged cells and fill the space (hence, proliferation). Importantly, barking orders to begin this stage also come from white blood cell-secreted cytokines. These chemical messengers are responsible for telling cells where to go, when to make copies of themselves, and perhaps most importantly, when to stop making copies of themselves. And during the final phase of wound repair (remodeling), these same cytokines are responsible for telling cells to make collagen proteins, the glue that holds the skin cells together.

For wound healing to proceed in a timely and efficient manner requires many different types of immune factors (neutrophils, macrophages, antibodies) to each send the correct message (make copies, eat the bacteria, make collagen) at the correct time. Delays increase the body’s risk of infection, so it is not surprising that clinicians are very interested in identifying wound-healing adjuvants—substances that enhance the body’s immune response.

Milk is an obvious choice to use as an adjuvant. One of its primary objectives is to stimulate and support the development of the infant’s immune system, and it is well known that it contains biologically active proteins such as lysozyme, lactoferrin, and antibodies, as well as pro- and anti-inflammatory cytokines. But the magnitude of ingredients that play a role in wound healing was only recently elucidated [3]. Performing a detailed molecular analysis of bovine colostrum (the milk produced during the very first days of lactation), Altomare and colleagues identified over 1700 different proteins in colostrum. When these proteins were clustered based on biological function, 93 proteins related to one or more of the stages of wound repair (e.g., inflammation, tissue-remodeling, collagen synthesis, blood vessel formation) [3].

Colostrum is known to have a higher concentration of immune components than mature milk, so the number of active proteins may be lower in other lactation stages. Total protein number may also differ in milks from different mammals (for example, human milk may have more immune factors than cow’s milk). However, Altomare et al. [3] highlight the high homology (structural similarity) between the proteins identified in bovine milk and those produced by humans. Structural similarity may mean functional similarity, suggesting these proteins can have positive effects on wound healing in humans despite originating from a cow. While using human milk on humans may be the ideal, cow’s milk (which is available on a much larger scale) may be sufficient to get the job done.

Putting Milk to the Test

Rodent models support the hypothesis of functional similarity across species. Human, cow, and camel milk have each demonstrated positive effects on wound healing in rats [1-3, 4]. For example, human milk used as eye drops for rats with corneal epithelial wounds resulted in faster healing than either artificial tears or autologous serum drops (drops made from the patient’s own blood) [5]. Artificial tears lack any factors that promote healing, but autologous serum drops were believed to be the closest to real tears because of the presence of growth factors and antibodies that occur naturally in serum. Milk, however, may be the best tear alternative, providing a greater number of factors—such as lactoferrin, fibronectin, and epidermal growth factor—that enhance epithelial wound healing [5].

Importantly, those three very same ingredients, and many more, can also be effective in wound repair when they are added to the diet. In two related experiments, Abdel-Salam and colleagues [1,2] investigated how supplementation with camel milk whey proteins influenced wound healing in diabetic rats. They selected the whey fraction of camel milk because, like all mammal milks, it contains bioactive proteins, pro- and anti-inflammatory cytokines, and cytokines that modulate cell migration and cell adhesion. In both studies, diabetic rats supplemented with camel milk proteins had faster healing skin lesions than did diabetic controls, and actually matched the healthy controls in progression from each stage of healing.

At first read, one could suggest that the supplemented rats healed faster simply because the extra protein gave them a nutritional boost. But chemical analysis of their blood tells a different story. Rats receiving whey protein had distinct cytokine profiles—higher levels of inflammatory cytokines (e.g., interleukin 6) and lower levels of anti-inflammatory cytokines (e.g., interleukin 10) than did diabetic controls. In effect, camel milk whey supplementation “normalized” the rats’ cytokine profiles [1,2].

Interestingly, the immune boosting effects of camel milk proteins occurred only in groups supplemented during the healing period; supplementation before wounding the study animals did not alter cytokine profiles or accelerate healing. This suggests the biologically active proteins and other molecules in milk interact with the host immune system immediately after ingestion and cannot be stored for a rainy (or wounded) day. As a potential adjuvant for wound healing in human diabetics, this is good news. Supplementing after an injury as part of a treatment plan is much easier to implement than requiring patients to take supplements daily just in case of a wound.

Milk in the Medicine Cabinet

But how likely is it that milk (or whey) supplementation will help human wounds heal? This question has yet to be systematically addressed, but there are several reasons to be optimistic. First, similarities in cytokines, proteins, and other bioactive components used for wound healing between rats and humans (and really, across all mammals) offer promise for similar positive health outcomes. Indeed, whey proteins from cow’s milk in particular, and cow’s milk products in general, are associated with improving health in diabetic humans, including increasing the body’s sensitivity to insulin. Second, the amounts of whey protein needed to produce the changes in cytokine profiles in the diabetic rats were well within the limits for human protein supplementation (e.g., 100 milligrams whey per kilogram of body weight). People hoping to build muscle through whey supplements, or clinical studies that investigate the effects of whey on body composition often supplement with one gram (or 1000 milligrams) of protein per kilogram of body weight. It is not yet known how much whey would be needed in humans to obtain similar results to those seen in rats. But if the amounts are comparable, the safety of the supplementation has already been established.

It is certainly exciting to think that the carton of milk setting in your refrigerator, or the cylinder of whey protein in your pantry has the ingredients to enhance your body’s immune response during injury. Maybe someday in the near future, milk will become a fixture in our medicine cabinets.